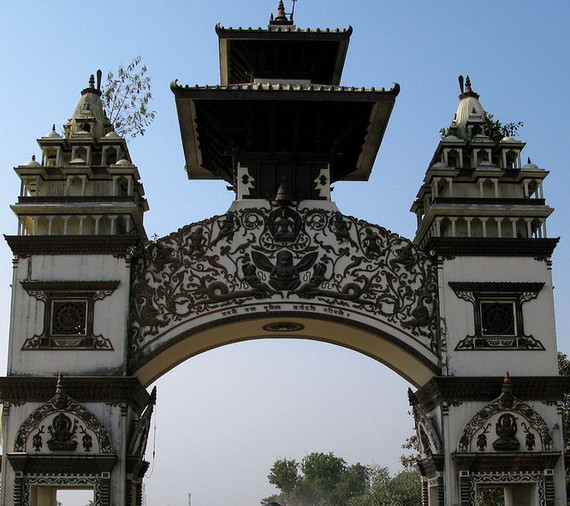 The Nepalese bordering gate to India in Birgunj. Photo: Wikipedia

An open border with India and weak controls at border raises concerns that international terrorist groups could use Nepal as a transit point.

The latest report by the United States also focuses and claims that international terrorist groups could use Nepal as a transit point. According to the report, "Nepali law criminalizes activities related to terrorism, including the financing of terrorism. While Nepal has specialized units to respond to terrorist incidents, law enforcement units lack the capacity to effectively detect, deter, and identify terrorist suspects. An open border with India and relatively weak airport security hamper efforts to implement effective counterterrorism policing."

South Asian countries are experiencing significant terrorist violence. India, Pakistan, and Afghanistan are on the frontline. Because of Nepal's open border with India, terrorist groups can exploit Nepal for safe heaven.

This risk is already high because of weak controls at the border between India and Nepal. Weak control at Kathmandu's Tribhuvan International Airport is another major loophole that international terrorist groups could misuse Nepal to hide or conduct activities.

There is no immigration control for Nepalese migrating to India or Indians coming in Nepal under the 1950 Peace and Friendship Treaty between India and Nepal. The Nepal-India Peace and Friendship Treaty (1950) had agreed to grant to the nationals of one country in the territory of the other the same privileges on matters of residence, ownership of property, participation in trade and commerce, movement and other privileges of a similar nature. The treaty provides for an open border between the two countries and allows Nepali nationals to work in India without a work permit, to apply for government jobs and the civil services.

The open border harms Nepal much more than India. Because of the open border, India has encroached on Nepalese territory at dozens of places. More terrorists with illegal arms and ammunitions cross over to Nepal than the other way round. Smuggled Indian goods and material are in plenty in Nepal because of the open border. Archaeological materials such as ancient bricks and materials of Lumbini area (birthplace of Lord Buddha) have been smuggled to India. Because India is constructing duplicate structures to draw the attention of the world, saying as Buddha was born in India. They are trying to distort the historical facts due to lack of the controlled border system between two countries.

Besides, misuse of the open border by terrorists and criminals is raising more concerns around the world. Terrorists can easily sneak into India through Nepal and vice versa. This is why Nepal and India need more border security to halt terrorists, human traffickers, and smugglers. Otherwise, international terrorist groups could use Nepal as a transit point.