KATHMANDU, Oct 16 (Reuters) - Survivors of a freak Himalayan blizzard that killed at least 25 people in Nepal said on Thursday they dived under a large boulder to shelter from an avalanche that buried four Canadians in their group when it smashed into the trail.

Mountain rescue teams helped by clear weather scoured the Himalayas for dozens of hikers missing after the early winter blizzard and avalanches this week hit the Annapurna trekking route popular with backpackers.

It was the second major mountain disaster in Nepal this year, after an ice-avalanche killed 16 sherpa guides on Mount Everest in April.

A group of seven Canadian trekkers and their Nepali guides were near the high-altitude village of Phu, 150 km (93 miles) northwest of Kathmandu, when an avalanche struck on Wednesday.

Four were killed immediately. The group's guide, Kusang Sherpa, described the sound of snow splitting from a mountain above and said he and three of the trekkers were able to dive behind the rock.

"I thought it was the last day in my life," Sherpa told Reuters after being evacuated to Kathmandu. "I was lucky that I survived with my three clients."

The snow did not reach the boulder, but they stayed there for about 20 minutes until they were sure the avalanche had stabilized, then walked an hour to a village called Kang, where they phoned for help and were picked up by a helicopter.

Kusang Sherpa, 25, said the avalanche swept away the team's oxygen bottles and other equipment. One of the three survivors said she heard a "boom" before disaster struck.

"It was a boom and then there was the avalanche," said the survivor who gave her name as Sonia, from Montreal. She declined to give her last name.

"We were trying to find our way to escape to safety and had to wait under a big rock for the avalanche to settle. It was very difficult and we were very much shocked," Sonia said in the lobby of a Kathmandu hotel.

Those killed by the unseasonable weather, brought by the tail end of a cyclone that struck India on the weekend, included three Nepali herders, three Nepali guides, two people from Slovakia, three Israelis, three Polish citizens and the four Canadians.

October is Nepal's peak trekking season, before the onset of winter when clear skies offer safe access to the mountains and spectacular views, attracting backpackers as well as experienced climbers.

Up to 85 trekkers registered on the trail were unaccounted for, but army and civilian rescue workers said they were hopeful most were safe.

"This is one of the worst mountaineering accidents that I can remember," said Gopal Babu Shrestha of the Trekking Agencies' Association of Nepal.

Shrestha took part in a helicopter rescue on Wednesday and said he had seen what looked like bright jackets and backpacks scattered near the Thorang-La pass, at an altitude of 5,416 meters (17,769 feet).

Rescue efforts focused on the pass which is the highest point on the trail that loops around the Annapurna peak, the world's 10th highest mountain.

The 240-km (150-mile) Annapurna circuit takes almost three weeks to complete, and is perhaps the most popular walking route in the Himalayas. It is dubbed the "apple pie" circuit because teahouses line the route offering cold beer and home baking.

Nepal is home to eight of the world's 14 highest mountains, including Mount Everest.

Nepal's climbing business is still recovering from the shock of an ice avalanche that struck the lower reaches of Mount Everest in April, killing 16 guides in the worst disaster in the history of the world's highest peak. (Writing by Frank Jack Daniel and Andrew MacAskill; Editing by Robert Birsel) 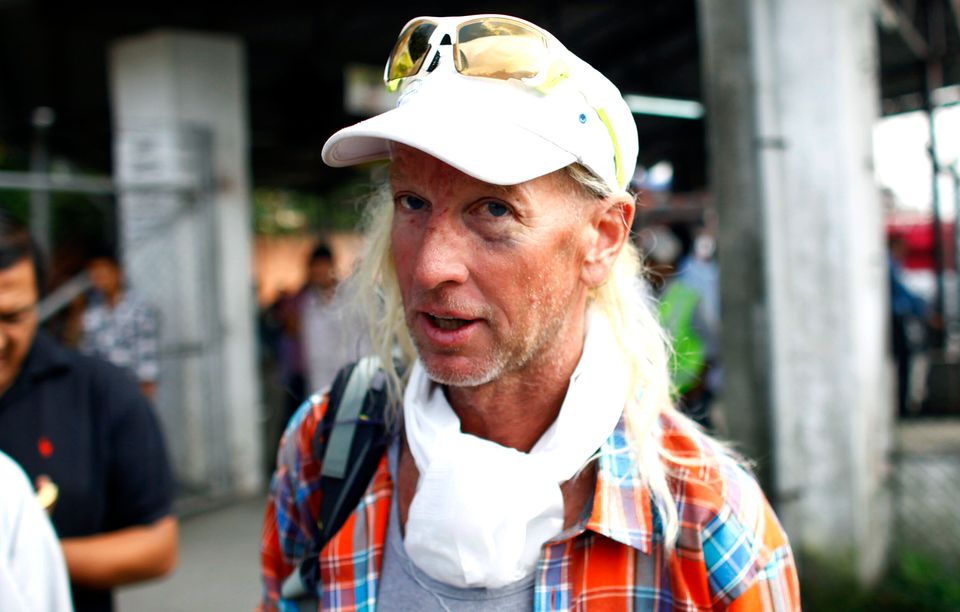 1 / 6
American Glen Plake, a survivor of a weekend avalanche at Mount Manaslu in the Himalayas arrives at the Tribhuwan domestic airport in Katmandu, Nepal, Wednesday, Sept. 26, 2012. (AP Photo/Niranjan Shrestha)
AP