In the midst of earthquake reconstruction and political violence in the country's south, Nepal's new constitution provides a reason for many citizens to celebrate -- particularly its lesbian, gay, bisexual, transgender, and intersex (LGBTI) community. After more than seven years of deliberation, on September 20, Nepal's President Ram Baran Yadav promulgated the small Himalayan country's historic constitution. It stands as the first national constitution in Asia--and only the third in the world along with South Africa (1996) and Ecuador (1998)--to include explicit rights and protections for LGBTI people. 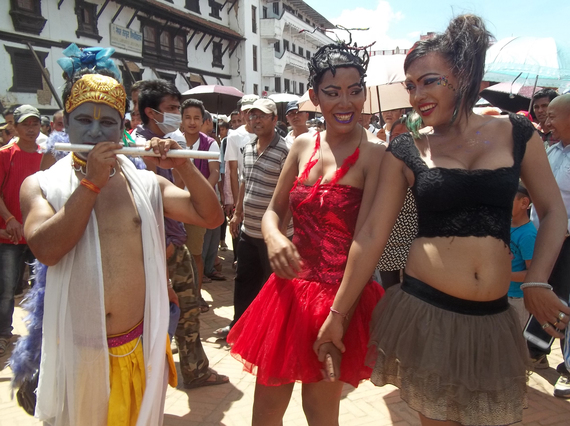 The new constitution marks a final stage in the peace process implemented following Nepal's ten-year civil war that ended in 2006. Although this is actually the country's seventh constitution, it is the first created by a Constituent Assembly directly elected by the people, and it establishes Nepal as a federal democratic republic.

The main LGBTI-specific provisions included in the constitution are Article 18, "Right to Equality," which states that the state or judiciary cannot discriminate against gender and sexual minorities; and Article 42, "Right to Social Justice," which provides gender and sexual minorities with the right to participate in state mechanisms and public services. Additionally, Article 12 ensures that citizens of Nepal can choose their preferred gender identity--male, female, or other--on citizenship documents.

Nepal's LGBTI Movement The landmark decision to include these in the constitution is a testament to widespread LGBTI advocacy efforts and the growing influence of civil society in Nepal. Ever since the 1990 "People's Movement"--which forced King Birendra Bir Bikram Shah to cede power and allow for a constitutional multi-party democracy--NGO's have emerged as a growing force in the country. This opened up space for various types of advocacy organizations and opportunities for international donors. Initially, funding allocated for HIV response helped to galvanize LGBTI advocacy in Nepal, according to a UNDP country report. As of 2001, there was no organized LGBTI organization in Nepal so activists combined forces to establish the Blue Diamond Society (BDS). At that time, Nepal's constitution did not recognize sexual or gender minorities, so BDS registered as a sexual health program NGO. Since its inception, BDS has been at the forefront of LGBTI advocacy, education, and programming in Nepal. The founder of BDS, Sunil Babu Pant, has been instrumental in championing Nepal's rising LGBTI movement. In 2007, Pant and three other leading activists petitioned the government in a prominent Supreme Court case. The verdict resulted in the government scrapping discriminatory laws against LGBTI people, recognizing a third gender category of "other", and establishing a committee to explore the legalization of same-sex marriage in Nepal. This Supreme Court decision largely paved the way for the LGBTI rights enshrined in the new constitution. 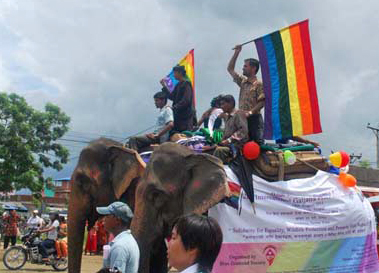 Photo: Blue Diamond Society From 2008 to 2012, Pant served as a Member of Parliament in Nepal becoming the first openly gay parliamentarian in Asia. Therefore, Pant has become somewhat of a poster child for Nepal's LGBT community and many credit him for elevating sexual and gender minority rights to the national agenda.

"This new Constitution makes clear that we can be proud of our LGBT identities, and that we can be proud citizens of Nepal," said Sunil Babu Pant. "This victory is just the beginning of our long road towards full equality. We are ready to move beyond the discrimination, violence and exclusion of the past, and continue with even greater integrity, responsibility and dedication to contribute to the nation-building process."

Manisha Dhakal, the current Executive Director of BDS, emphasizes the role that extensive advocacy efforts have played in changing perceptions and highlighting LGBTI issues at the national level. Leading up to the constitution, BDS held a national consultation, regional workshops throughout Nepal, and a South Asia regional consultation to educate the public and stakeholders on LGBTI issues.

She identified that the challenge moving forward will be to sensitize the country's bureaucrats as well as the public to LGBTI issues. "We need to change the perceptions of the public and society, but it takes time." 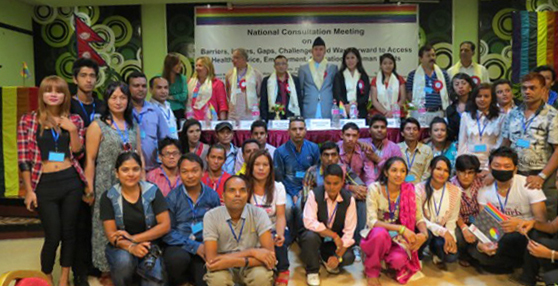 Dhakal stressed that national laws and policies must be coupled with grassroots outreach to create change at the societal level. Currently, BDS operates 53 branches throughout Nepal and is working to transform perceptions at the local level through programs like Pahichan Media, which houses a LGBT-specific national news website as well as a daily LGBT national radio broadcast.

One major issue still to be determined in Nepal is same-sex marriage. The new constitution does not explicitly address this, but does include vague language that states a citizen cannot be discriminated against based on marital status. Earlier this year, the national committee tasked with exploring the issue of same-sex marriage submitted its report to the government recommending Nepal to adopt same-sex marriage. Dhakal said the report is currently with the Ministry of Women, Children and Social Welfare, but BDS is lobbying the government to transfer the report to the Law Ministry to ensure legal implementation.

Ideally, Dhakal said, Nepal's progressive constitution can serve as a model for other countries in South Asia and around the world. BDS works closely with the South Asia Human Rights Association of Marginalized Sexualities and Genders, which facilitates collaboration between it and its counterparts in Nepal and the larger region.

Several social and cultural factors have facilitated Nepal's tolerance of LGBTI people, creating a more conducive environment for progressive judicial decisions and constitutional rights. Historically, Nepal has been a diverse, multicultural, and multiethnic country. The presence of various gender and sexual identities goes back centuries and is recorded in ancient religious texts. Additionally, Nepal's two main religions--Hinduism and Buddhism--are tolerant of gender and sexual minorities and lack the violent religious extremism that exists in some other regional countries.

Another unique characteristic of Nepal is that it was never colonized--unlike many of its South Asian neighbors. In other regional countries such as India, Pakistan, Bangladesh, and Myanmar, Section 377 of the former British penal code criminalized homosexual acts and is still reflected in national legislation and societal norms.

Despite its flaws, Nepal's new constitution stands as a place to start for democracy. Same-sex marriage, equal gender citizenship provisions, and the exclusion of minority groups are just a few of the key issues that the government must address moving forward. For the moment, however, the new constitution marks a changing tide for LGBTI rights in Nepal and, perhaps, the region.

As Dhakal explained, "Gaining acceptance in society is a challenge, but the new constitution has provided us with an opportunity."