KATHMANDU -- Ranjita Shreshta’s firstborn was given a head start on life: the baby girl was born hours before a devastating earthquake wreaked havoc in the Nepali capital, leaving her parents homeless but impressed by their daughter’s tenaciousness.

“In years to come, I will tell her, ‘You were given a life when others had theirs taken away,’” the 27-year-old housewife said as she sat in a rudimentary tent outside Nepal’s oldest maternity hospital. She shielded her still unnamed daughter from the thick drops of rain that leaked through the awning, porous and trimmed with red Hindu swastikas. In the maternity ward where her daughter was born, the walls are jaggedly split down the middle, and their windows are missing chunks of glass, as if blown out by an explosion.

Like hundreds of women in Kathmandu who gave birth on the day of the April 25 earthquake and during the chaos and powerful aftershocks that ensued, Shreshta’s first experience of motherhood was filled with anxiety and stress. Rushed into the Paropakar Maternity and Women’s Hospital, doctors performed an emergency caesarean section three hours before the 7.8-magnitude quake.

“I had held my baby in my arms for just a few minutes, when the whole building started to violently shake," Shreshta said. "My first thought was how to get her outside.” Shreshta’s husband, a day laborer, survived the quake, along with his brother and two sisters. On Tuesday, they cheerfully encircled Shreshta and the newborn, who was wrapped up in thick blankets. 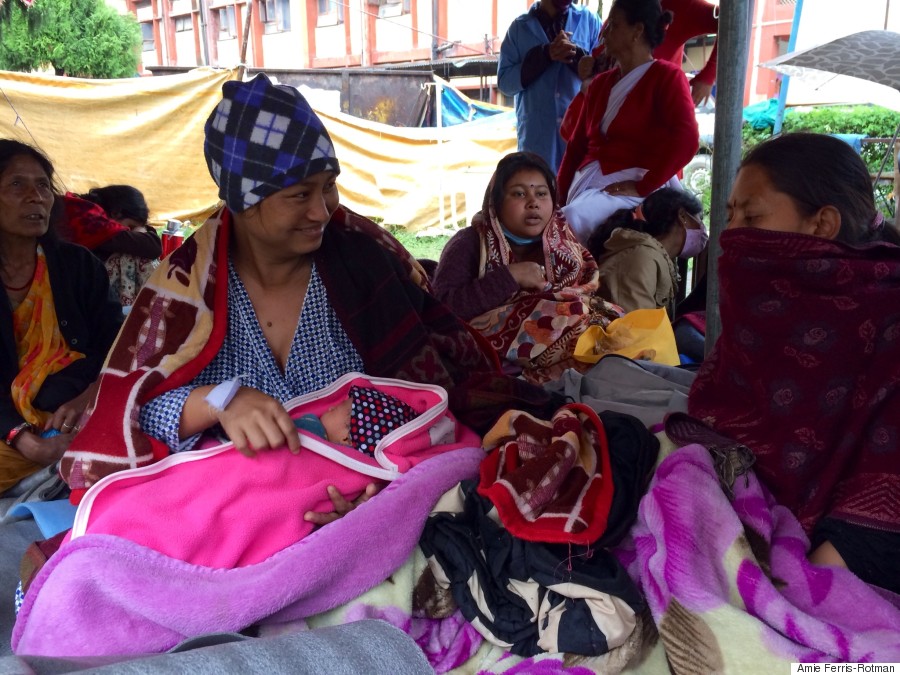 Since the earthquake struck, killing over 5,000 people and flattening a cluster of Kathmandu’s historic sites, scores of new and soon-to-be mothers have been camping out, exposed to the elements or taking refuge in the cramped entrances of maternity hospitals. They sleep on soggy blankets and have limited access to toilets and fresh water.

Huddled near Shreshta was 45-year-old Bawani Shaha, who was breast-feeding her hours-old son. She was admitted to hospital the day before the earthquake, only to be shoved outside. After three nights spent in the open air on a thin black mat, she finally gave birth, to her 15th child, Tuesday morning on the floor of a newer building that suffered less damage. “I consider myself lucky. There were women delivering right here where I sit,” Shaha said. She sat flanked by two of her teenage daughters; one of them stroked her new brother, while the other hoisted an umbrella over their mother. Only seven of Shaha’s children survived past age five. “This one will too,” her 17-year-old daughter Kritika insisted. 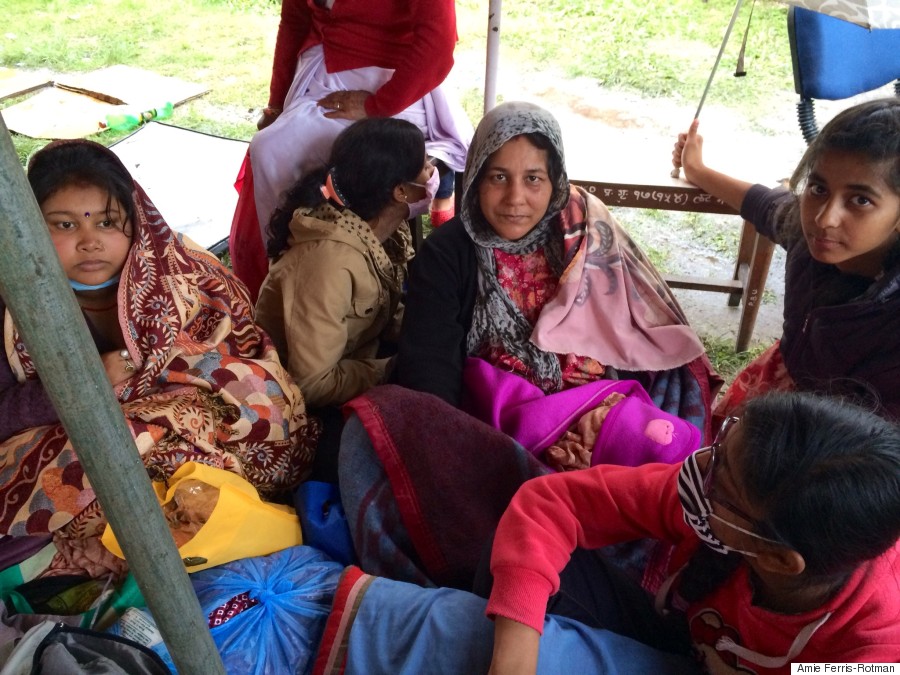 Nepal’s largest earthquake in 80 years has been especially hard on women and children, who rarely have independent incomes and spend more time at home than adult men. The disaster, which has forced thousands of Kathmandu residents to sleep in makeshift tents in outdoor spaces, has made them even more vulnerable. Though the hospital has discharged many mothers, some have no home to go to, while others are simply afraid of more aftershocks. The city was briefly rocked late Monday night by a 4.3 quake.

Damaged roads and limited transportation since Saturday's earthquake mean more women are giving birth at home, without access to medicine or trained midwives, said Dr. Shanti Joshi, the deputy director of Paropakar Hospital. “We’re seeing more cases of severe anemia and retained placentas, which can be deadly,” she said in a room decorated with a sketch of the 19th-century English nurse Florence Nightingale and ornately carved Hindu gods. Earthquake-spurred stress also caused a spike in first trimester miscarriages, she said, adding that “as in all disasters, women are worse off.” But Joshi, clad in a pale green shalwar kameez, was at pains to point out the silver lining among the misery.

“These babies will grow up to be strong. For us, we had to wait many years before we learned about life. But not the earthquake babies,” she said enthusiastically, adding that her own mother’s tenacity comes from being born on the eve of the 1934 earthquake in Nepal that killed more than 17,000 people. 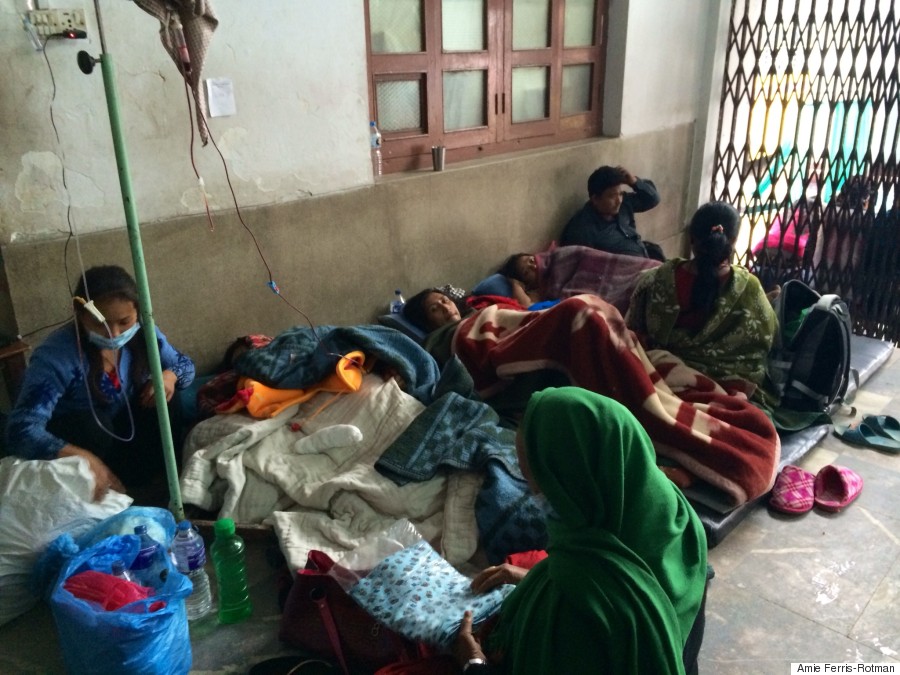 With a state of emergency declared in Nepal, and officials struggling to get medical and other aid into its tiny international airport, the situation for mothers and newborns remains precarious. The United Nations has warned that diarrhea is already a growing problem, and an outbreak of measles is feared. UNICEF has said that almost 1 million Nepali children are in “urgent” need of humanitarian assistance.

In Paropakar Hospital’s entrance hall, expectant mothers and their families lie strewn across the maroon stone floor and stairways, some in the midst of painful contractions. An old and battered ambulance sits parked outside, serving as a makeshift emergency room for babies born with complications.

At the Kathmandu Model Hospital, 21-year-old mother Kalpana Lama cradled her son, not yet two hours old and swaddled in a thick yellow towel. Electricity is scant, and the thought of spending the night in the unheated maternity ward makes Lama restlessly shake her black bob from side to side. “My son has been through enough," she said. "But he will grow up lucky, of that I am sure.” 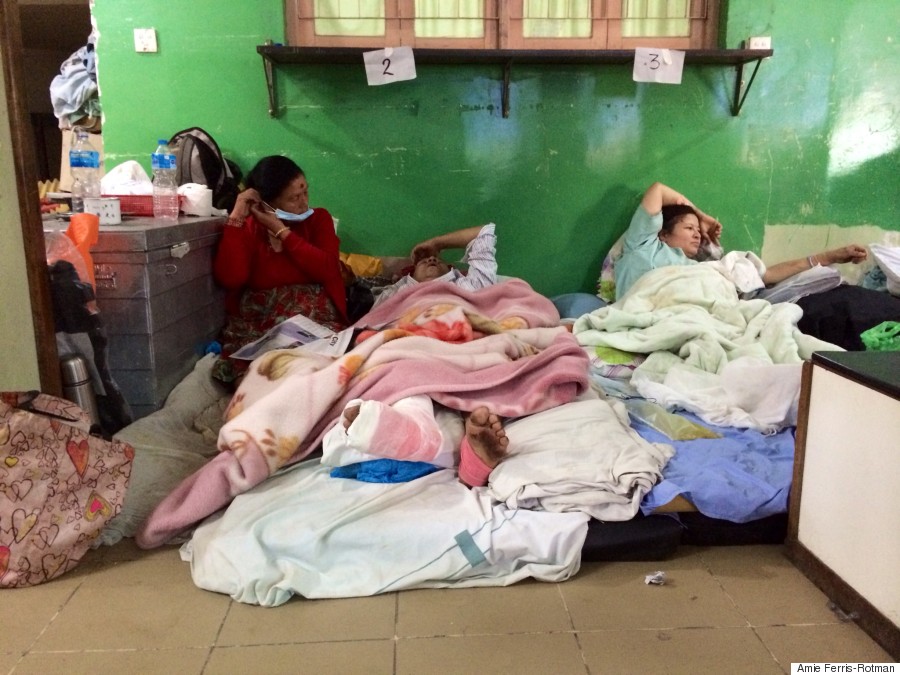