SANGACHOWK, Nepal -– Food in this earthquake-shattered Nepali village will run out in a few days, fresh water is an hour's walk and disease has begun to spread.

As the sense of urgency rises, international aid agencies scramble to help those in rural areas, four days after a devastating 7.8 magnitude earthquake killed more than 5,000 people and wiped out whole villages. Prime Minister Sushil Koirala, who has declared three days of mourning, told Reuters that the death toll could reach 10,000.

Nepal’s difficult terrain and cash-strapped government mean the physical and humanitarian scale of the disaster is just beginning to reveal itself. The Nepalese army is conducting a huge relief effort, with reports that nine out of 10 soldiers are involved, airlifting the critically injured out of rural areas and overseeing logistics for medical teams. Despite these efforts, and the flood of foreign help, including the release of $15 million from the United Nations emergency fund, tens of thousands of people are still sleeping in makeshift tents with no toilets.

In addition to the toll, the crisis caused by the country’s worst earthquake in 80 years has exposed Nepal’s shoddy architecture and lack of a clear emergency plan.

In Sangachowk, whose residents are scattered across sloping hills about 25 miles northeast of Kathmandu, bodies are still being uncovered.

“Our dead cattle and goats are beginning to rot and stink, but there are humans down there, too,” said shopkeeper Bidur Giri, 51, standing beside what is left of his small convenience store. As he spoke, wafts of sour, fleshy decay drifted through the dirt roads. Giri pointed at more destruction below the cliff, where cement houses have been reduced to rubble. All that remains of his store is a green-painted wooden façade, whose doors open onto an empty void.

Many in the village work as day laborers. Now, without opportunity to work, their savings are dwindling, along with their ability to find food. 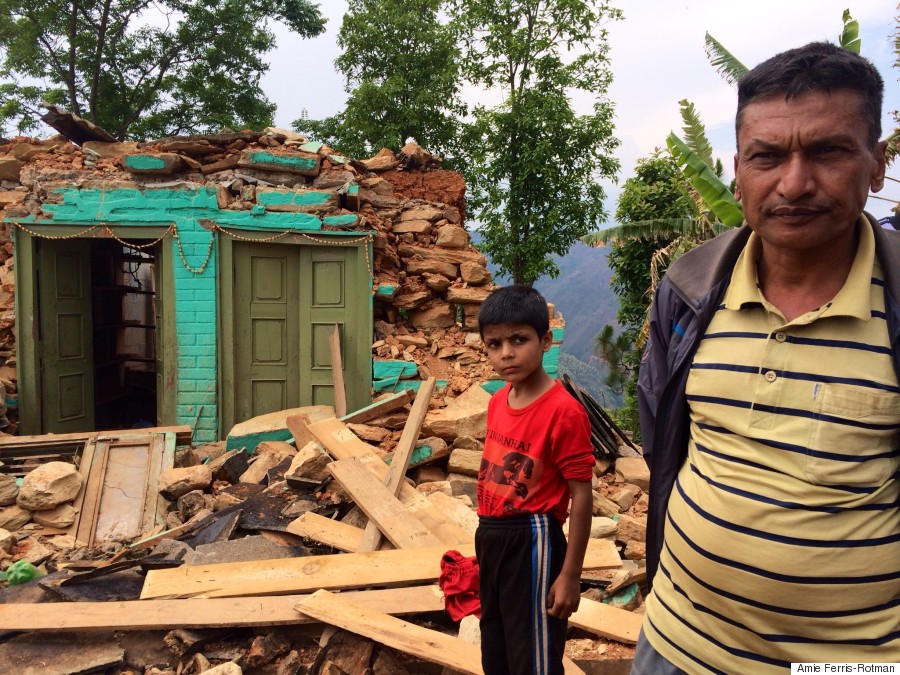 Shopkeeper Bidur Giri, 51, stands by the remains of his store, next to Sandesh Aryal, 10, in the village of Sangachowk.

There are enough biscuits and dried noodles -– which people are eating without cooking -– to last five more days, said Chatur Giri, 56, a farmer who oversees citizen affairs in the village of 8,000. Around four-fifths of Sangachowk’s homes have been destroyed, he said.

Groups of men and women sat perched on heaps of debris, trying to shelter themselves from the relentless midday sun. Chickens and the occasional black goat ambled past. By nightfall, torrential rain will come, typical of the Himalayan weather at this time of year.

Almost all of the 1,000 natural springs in the region have been damaged, according to Oxfam, which is trying to install a 6,600-gallon water tank in the nearby town of Sindhupalchowk.

“The situation is terrible. There is no medicine, not even hand sanitizer or paracetamol,” said Sajjad Mohammad Sajid, Oxfam’s regional human coordinator for Asia. “People are developing colds, cough and fever. Diseases are growing.”

WaterAid has warned that the next weeks are crucial for the landlocked country to procure fresh water. Without it, there will be serious health risks.

Sandesh Aryal, 10, dressed in mud-caked track pants and a red shirt, said he had diarrhea. His science teacher, 22-year-old Suraj Giri, grew incensed as he talked of the lack of government response.

“People are going to the toilet everywhere," Sandesh said, punching his fist in the air. "We are getting no help at all from the government and we are very, very angry.”

Oxfam’s Sajid conceded that the government has not dispatched anyone to help the hardest-hit areas, such as Sangachowk.

Nepal’s government has admitted its response has been inadequate and that there were "weaknesses" in its relief effort. While food is an obvious priority, Maj. Deepak Gurung, who oversees military operations in the area, said lack of electricity and no drinking water could “lead to more damage than everything else combined”. 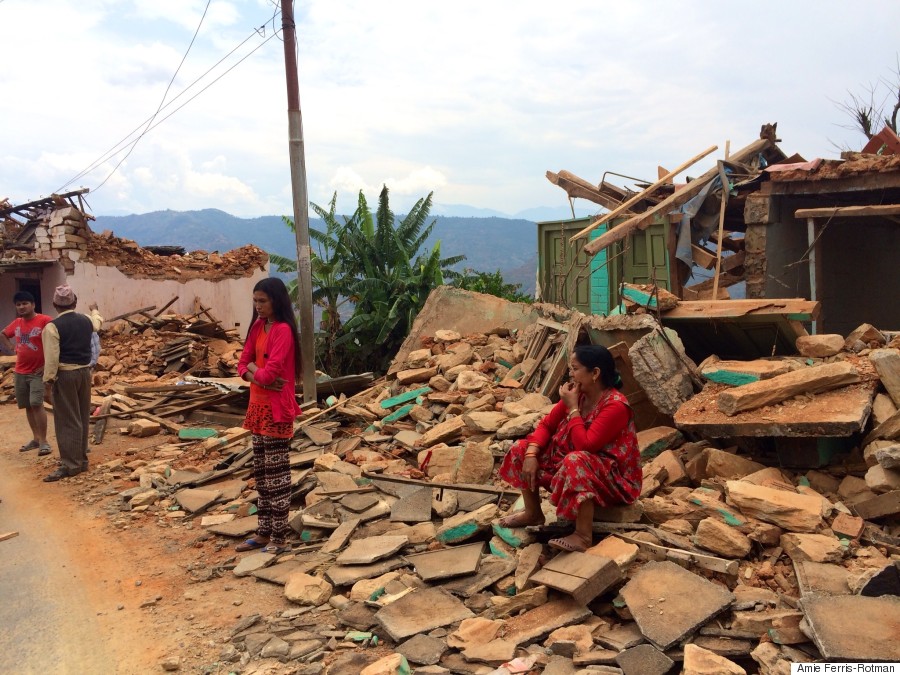 Women who've lost their homes in Sangachowk pass time by the main road.

In the nearby town of Sindhupalchowk, the Red Cross is distributing tarpaulins and ready meals to families, and conducting rescue operations. “We are still looking for the dead and injured. Bodies can cause disease and need to be moved, and the injured need urgent help,” said Ram Jee Karki, head of International Committee of the Red Cross Nepal’s central north region, as military helicopters hovered above. He stood beside a tent for the injured, who lay strewn on thin scarves and urine-smelling hay.

Doctors from the now collapsed government-run hospital said most were suffering from head and spinal injuries and broken bones. Without electricity, doctors are unable to take X-rays, and often must guess at what may be wrong beneath the skin. Several people wore days-old blood-soaked bandages around their heads.

“The mess, the rain, we fear what this will lead to,” said Dr. Nikee Shrestha, who slept outside on the night of the earthquake, beside a mound of corpses. Cholera and other waterborne epidemics pose a “massive issue that will be hard to avoid,” she added.

With aftershocks continuing through Wednesday night, and Nepalis still camping en masse outside, the race is on to prevent a massive disease epidemic. 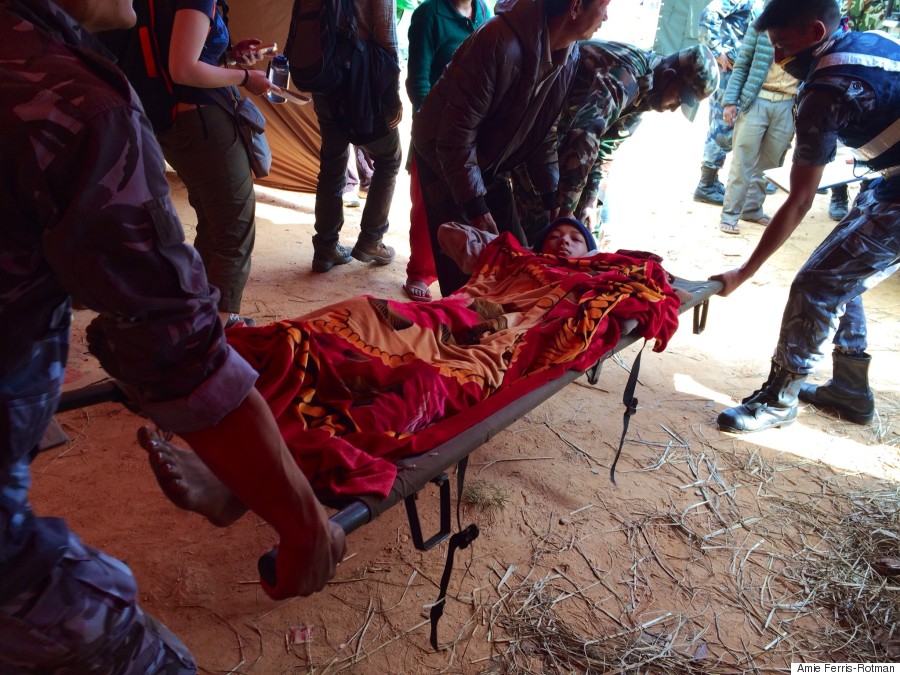 Soldiers carry an injured woman to a van in Sindhupalchowk.