The world’s tallest mountain shrank by about one inch in the quake, according to information provided by UNAVCO, a nonprofit geoscience research consortium, to the site LiveScience. The analysis is based on data from the European Space Agency Sentinel-1A satellite, which passed over the affected area for the first time on April 29.

When the fault between the India and Eurasia tectonic plates slipped, causing the earthquake, strain was released that allowed the Earth’s crust to relax. That relaxation led to a slight reduction of the height of Everest.

In an email to The Huffington Post, Roger Bilham, a fellow at the Cooperative Institute for Research In Environmental Sciences and a professor in geological sciences at the University of Colorado Boulder, compared the process to suddenly releasing an eraser that's been squeezed. "Squeeze an eraser and it rises," he said. "Let go and it shrinks back to its original shape."

Bilham estimates that Everest shrank by one or two millimeters, while the Annapurna Range, a mountain range located in central Nepal closer to the earthquake, actually grew by 20 centimeters, or roughly 8 inches. 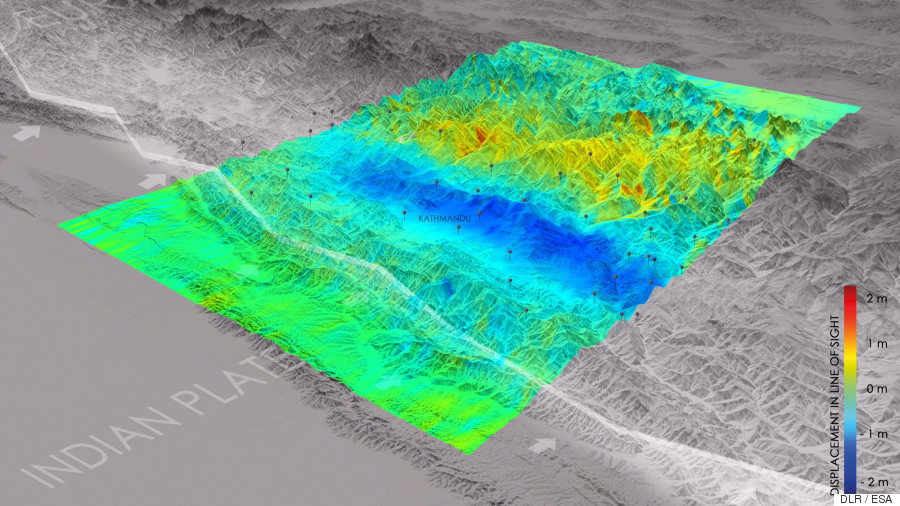 In the above image provided by the German Aerospace Center, the blue region surrounding Kathmandu rose upwards toward the satellite by around 2.6 feet. Yellow areas subsided, or shrank, in elevation away from the satellite. According to the ESA, the ground also shifted horizontally by up to six and a half feet in some areas.

Similarly to the Annapurna Range, an area around Nepal's capital city of Kathmandu was actually lifted up vertically by around 3 feet, according to an analysis by the German Aerospace Center. The area is estimated to be more than 55 miles long and 18 miles wide.

Data gleaned by the Sentinel-1A satellite is also useful to scientists interested in the mechanics of the quake itself.

"We want to know which parts of the fault slipped," Tim Wright, a geophysicist at the University of Leeds, told the BBC. "And that's important because it tells us those parts that did not, and which are still primed and ready to go in a future earthquake."