"I feel safe now," says Om, a 24-year-old who identifies as third-gender, as he walks across Bageshwori Park in Nepalgunj to buy coconut milk. "I used to come to this park at night to meet friends, but I was beaten in the bathroom one time because of how I look, so I never went back." 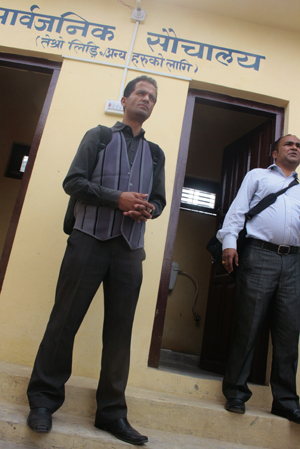 Om is back in the park for a special occasion: the opening of Nepal's first gender-inclusive public toilet. Smoke from a pile of burning corn cobs and garbage 40 feet away wafts through the crowd, making some cough. Then, as the afternoon sun blazes, a crimson curtain gets jerked aside to reveal a plaque, and the country's first gender-inclusive public toilet is officially opened.

In Nepal, a legally protected third-gender category, labeled "third-gender" or "other," has existed since the Supreme Court issued its decision in favour of a group of LGBTI NGOs in 2007. The court ordered the government to scrap all discriminatory laws, recognise those who identified as third-gender, and form a study committee to recommend same-sex marriage policies for Nepal. The lead petitioner on that case was Sunil Babu Pant, who, six months later, was elected to parliament.

Legally speaking, the third gender in Nepal is an identity-based category for people who do not identify themselves as either male or female. This may include people who perform or present as a gender that is different from the one that was assigned to them at birth based on genitalia or other criteria. It can also include people who do not feel that the male or female gender roles that their culture dictates to them match their true social, sexual, or gender identity.

The 2007 court decision is regarded by human rights activists around the world as one of the most progressive legal moves a government has ever made with regard to gender identity. Most notably, the court declared that the only requirement for being identified as a third-gender is self-identification. 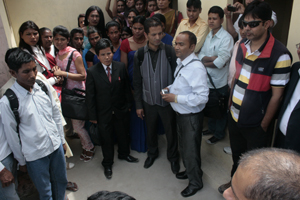 "This is to show respect for the gender-variant people of Nepal," said Pant of the new facility in Nepalgunj. "And to demonstrate physically what our court said five years ago, that citizens who identify as not male and not female are equal citizens."

Pant used his Parliamentarian's Development Fund to build this facility in the Nepalgunj park and one elsewhere in the city.

Opening a third bathroom may seem like a simple move, but the battle over gender-segregated toilets has been fought for years by transgender rights activists and organisations around the world. In Thailand schools began to denote separate bathrooms for kathoeys (effeminate male-bodied people) as early as 2003. Rights groups and kathoeys applauded the development, as it ensured them more safety.

Pant believes such facilities represent fundamental rights and inclusion. He says, "Third-genders are not exempted from taxes, so why would the government leave them out of basic public facilities like toilets, health-care centers, education centers, and old-age homes?" Pant believes that this shift in policy can go in two directions: "Toilets should either be gender-neutral or, if gender-segregated toilets are necessary, they must be built for all, not just for men and women."

But the idea of a third facility isn't universally accepted. A report by the U.S.-based Transgender Law Center, "Peeing in Peace," recommends that activists not advocate for separate "transgender bathrooms." Citing safety (people "out" themselves by entering), likely resistance (extra construction means extra costs), and limited scope (transgender people have other identities, as well), the report suggests instead that gender-segregated bathrooms operate on the basis of gender identity, or that all public bathrooms be gender-neutral. 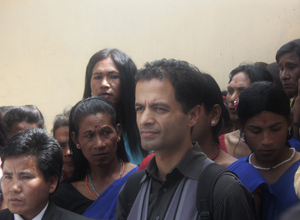 However, Pant argues, "gender segregation is an important part of Nepali culture." He explains that his advocacy group, Blue Diamond Society, surveyed its members (the organisation has over 400,000 members) and asked what would make gender-variant members feel comfortable. "This facility is an option among three," Pant explains. "People who do not identify as male or female need this option to be safe, and we want it for them, because they should have the right to celebrate and enjoy this identity. Why would we make them fit into a facility they didn't identify with?"

Some development scholars see such exclusion as symptomatic of a broader problem: that gender-variant people are left out of development programs in general.

"The lack of provisions for people of all genders and gender expressions violates basic rights and compounds the lack of respect that gender-variant people experience in many countries from society and the state," explains Andrea Cornwall, professor of Development Studies at the University of Sussex.

Arguing that HIV/AIDS programs are virtually the only sub-area of development in which gender-variant people are addressed, Cornwall sees the problem as a broad one: "Development programs have largely failed to address gender variance. We see little development attention being given to people whose gender expression is different from that which is expected of men and women in their society."

And if the programmes are further excluding already-marginalised gender-variant people, their options for accessing safe, clean facilities such as public toilets are limited.

"Safe access to bathroom facilities for all people is essential to health," explains Dr. Sonal Singh, Assistant Professor of Medicine at Johns Hopkins University Medical School. Singh, who is the author of a forthcoming article on health-care access for LGBTI people in Nepal, believes this new facility is "an infrastructural embodiment of human rights."

"Building a public toilet like this in rural Nepal demonstrates that allowing transgender and gender-variant people access to basic health facilities is an important part of ensuring access to health in development projects," he explains.

A month young, the facility appears to be popular. Sudip Bhatta, regional coordinator for Blue Diamond Society in Nepalgunj, reports that "our transgender members are very happy with the toilet. They say it has relieved a lot of stress in their lives and makes them feel safe."

Blue Diamond Society continues to advocate for the rights of transgender and gender-variant people on all fronts, perhaps most notably in the ongoing struggle to have the government issue citizenship ID cards allowing for "other" as a gender option. "We are confident that whether on documents or in infrastructure, the government is moving in the right direction," says Pant.

This article was originally published in The Kathmandu Post.