KATHMANDU, May 24 (Reuters) - A river dammed up by a huge landslide in Nepal's northwest has begun flowing again but the risks of flash floods are not over yet, police said on Sunday.

The landslide at Ramche village in Myagdi district, about 140 km (90 miles) northwest of Kathmandu, struck on Saturday night and blocked the Kali Gandaki river, triggering fears that a large volume of water would build up and then burst through, causing floods downstream that could reach as far as India. 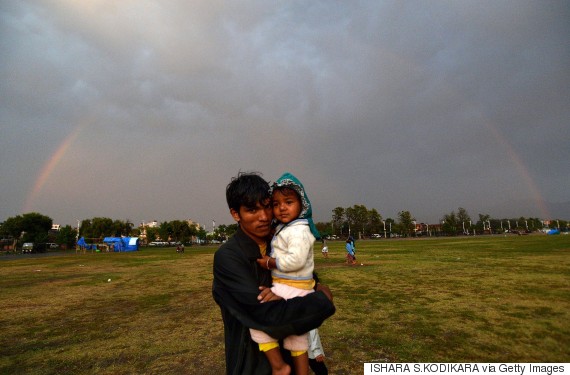 A Nepalese man carries a child in front of a rainbow at a relief camp for earthquake survivors in Kathmandu on May 23, 2015.

"We think it will not breach the dam suddenly and cause downstream floods. But the risk for that is not totally out yet," he said.

Earlier the authorities asked thousands of downstream villagers to move to safer areas amid concerns that the river could bring floods in the districts of Parbat, Syangja, Gulmi, Palpa, Nawalparasi and Chitwan.

The river flows into India where it is known as the Gandak. 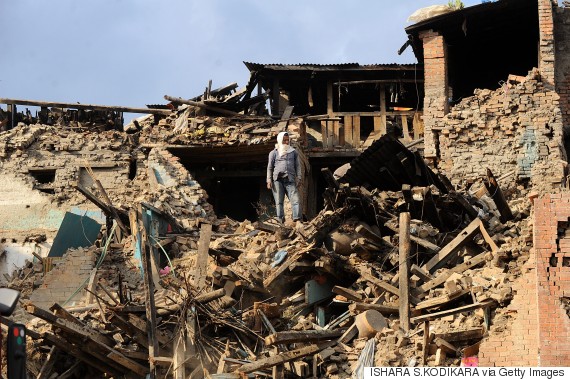 A Nepalese resident clears rubble of a collapsed house after an earthquake in Baktarpuron the outskirts of Kathmandu on May 20, 2015.

A big earthquake hit Nepal on April 25, triggering numerous landslides and avalanches and killing more than 8,000 people. A second quake hit the mountainous country on May 12, killing scores.

Myagdi district administrator Tek Bahadur K.C. said the landslide had created a 150 meter-high dam and the water build- up spread about three kilometers.

"We had already moved 123 people in the area to safe places fearing landslides as the mountain had developed cracks in the earthquake," he said.

"This is why there is no human casualty even in such a massive landslide that has destroyed part of a dirt road connecting the nearby areas," K.C. said.

In August last year a massive landslide blocked the Sunkoshi river in northeast Nepal killing more than 150 people and causing fears of flooding as far away as the eastern Indian state of Bihar, where thousands of people were evacuated. (Editing by Sanjeev Miglani and Greg Mahlich)