Courtney Mitchell, 41, and Sarah Welton, 48, from Denver, Colorado, celebrated in a Hindu Nepalese tradition at the Dakshinkali temple south of Katmandu, the capital of the Himalayan nation. Local gay rights activists and supporters cheered the ceremony attended by their close friends.

Nepal Parliament member Sunilbabu Pant, a gay rights activist, said it was the first public wedding of a lesbian couple in the mostly conservative nation.

Same-sex marriages are not legal in Nepal, where gay couples hid their relationships until recently, when the supreme court ordered the government to legally guarantee sexual rights and end discrimination. The laws are being drafted, but broader political differences have delayed passage.

Pant said while Monday's wedding did not hold any legal status, "it was a huge achievement for gay rights campaign in Nepal."

Pant and his group, called Blue Diamond Society, have been fighting for their rights and have even opened a travel agency hoping to bring in foreign gay couples to come to Nepal for weddings and honeymoon.

At the temple, 14 miles (22 kilometers) south of Katmandu, Mitchell wore trousers, a hat and vest while Welton wore a red sari and covered her head with a veil.

A Hindu priest performed the ceremony. The couple offered flowers, fruits and money to the fire and gods at the traditional ceremony. The couple put flower garlands on each other while Mitchell put red vermillion powder on Welton's forehead, which is equivalent of exchanging of rings in a Christian wedding.

The guests danced to tunes played by a traditional band with drums and trumpets. One musician, Sitaram Basiyar, said he has performed at hundreds of weddings in his lifetime but this was his first lesbian wedding.

"I never thought I would see such a wedding in my lifetime," he said.

The couple said they were happy to be married in Nepal and to contribute to the campaign for gay rights in the country.

"It was my dream wedding come true. This is a fabulous ceremony," Welton said.

Mitchell worked with the U.S. Peace Corp in Nepal between 1998 and 2003, when people did not admit homosexuality.

"It is because if everything that has been happening since 2003 with sexual minority rights we decided to come here for the wedding," Mitchell said. "We are very excited about all the progress Nepal has made for gay rights in Nepal and I really wanted to show my support for Nepal."

The couple who met at a birthday party five years ago have adopted a 9-month-old girl.

They plan to register their wedding in the state of Iowa, where same-sex marriage is legal, while it is not in Colorado.

Blue Diamond Society organized a ceremony last year for a Briton and Indian united in Nepal's first wedding ceremony for a gay couple. It was a private ceremony attended by a few guests. 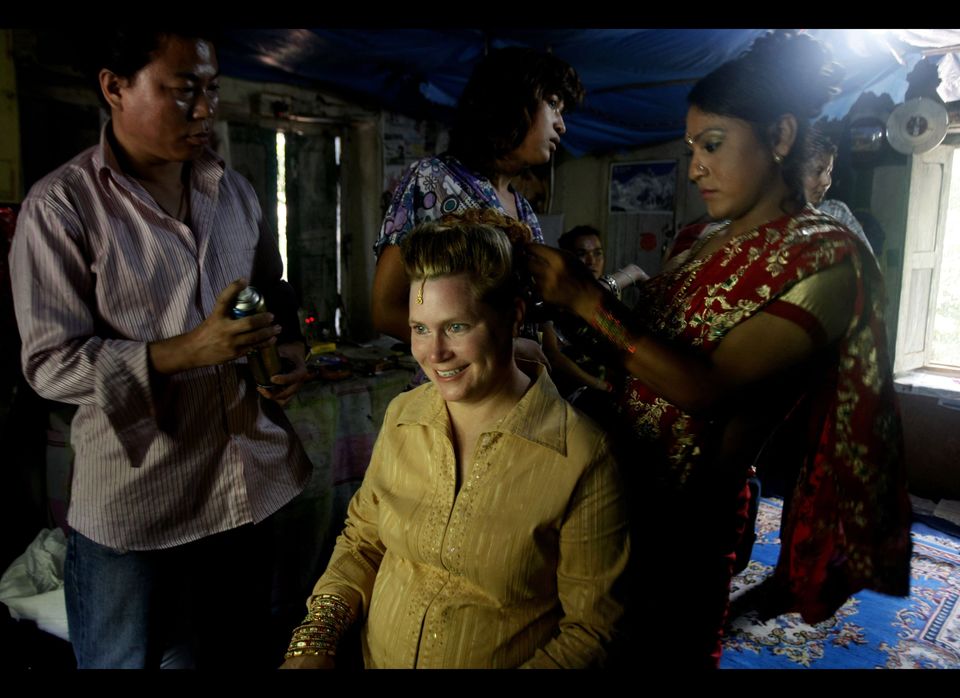 1 / 12
Sarah Welton, center, a lawyer, gets dressed for her wedding ceremony with Courtney Mitchell, a college professor, in Katmandu, Nepal.
AP