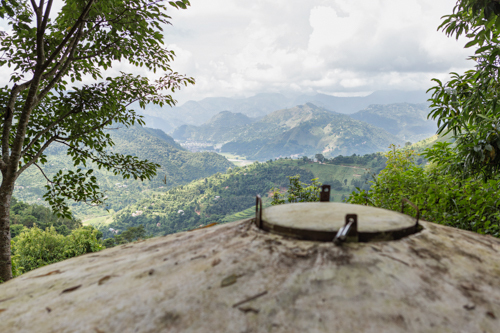 Energy is at the forefront of most economic, environmental and developmental issues the world faces today. In Nepal, roughly 80% of the population lives in rural mountainous regions that lack access to reliable electricity. Solar integration for agricultural purposes has been implemented throughout various parts of rural Nepal to aid in irrigation and agricultural needs all year round.

The remaining population of Nepal is grid-connected, but face a 500 MW energy deficit, with 16+ hours of daily blackouts on average during load shedding hours. Many businesses run privately owned diesel generators for backup, but still suffer from increasing fuel costs, frequent shortages, and pollution from fumes and noise. In the current situation, local businesses have been forced to shut down and are actively seeking out clean, reliable and alternative energy solutions. Solar energy has become a very feasible and viable answer to power Nepal and provide a path towards energy independence.

Farmer Dilli Ram Regmi, 65 years old, lives in the farming village of Jharlyangdi in Walling, Syangja District. He's been a farmer since the age of 16 and grew up working in agriculture. There are 12 members in his family and they depend on agriculture to make a living. Dilli Ram saw a lack of water in his community and shared his concern with the Syangja Agricultural Committee. With the help of local and international charitable organizations, iDE Nepal, Renewable World and SunFarmer, a Solar water MUS (Multiple Use System) was implemented in December 2012 and completed within two months. His community uses a solar powered water pump that lifts water from the valley below to a tank above the community on a hill. Access to 16 water distribution taps stand outside the 32 households in the community and provides water for drinking and irrigation giving Dilli Ram and his family back time they would otherwise use for collecting water.

Renewable World and iDE Nepal, describes a Solar MUS (Multi Use Water System) as an improved approach to water resource management for small communities to meet both domestic and agricultural needs. The Solar MUS system provides the farmers in Syangja with a 15,000 Litre storage tank. During the dry season, there is a scarcity of water and with a second storage tank, the farmers would have the opportunity to irrigate an additional area of 520 sq. meters of land. The land in Sirubari is ideal for vegetable farming, but currently there is only enough water for drinking and livestock. Traditionally, the land was able to grow millet, corn, rice, and vegetables including tomatoes, cauliflower, cabbage and radish.

Nepal continues to rebuild with reliable energy technology that is clean, efficient and affordable. Access to reliable energy is fundamental to a modern quality of life for its citizens and the country's global prosperity. 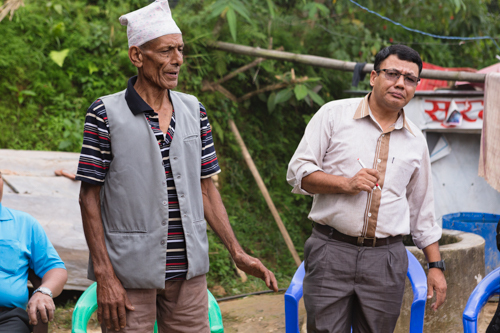 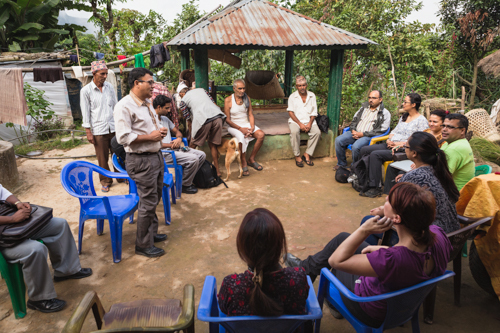 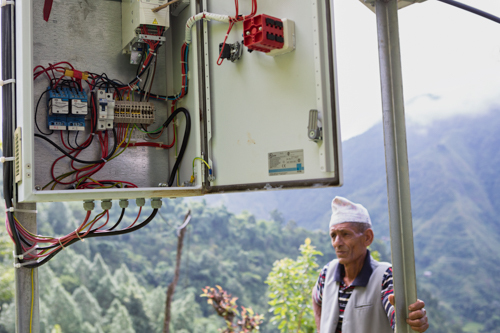 Farmer Dilli Ram Regmi shares the interior of the controller for the solar water pumping system that pumps water over 80m high for drinking and agricultural purposes in his community. 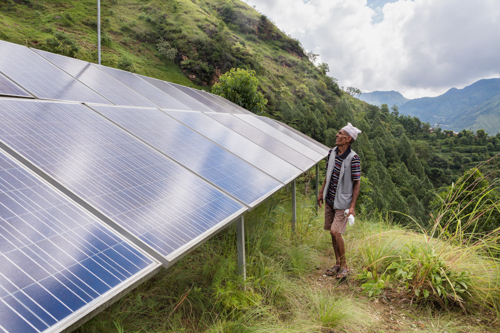 Dilli Ram Regmi stands beside the 4.5kW solar array that harnesses the sun's energy to pump water for drinking and mushroom farming. 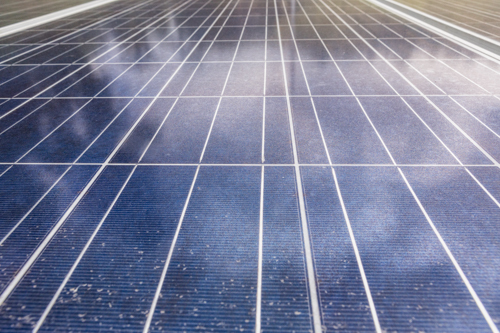 A long-life span of solar panels, over 20 years, and decreasing manufacturer costs in the past decade, makes solar the future of sustainable energy. 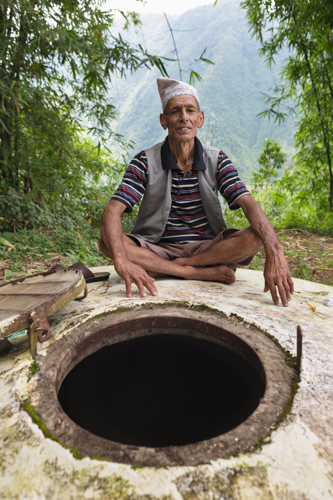 Dilli Ram Regmi sits proud beside the well filled with water powered by solar water pumps at the base of the mountain. This storage well has proved highly beneficial to the farming community who would otherwise have to walk hours to carry drinking water daily. 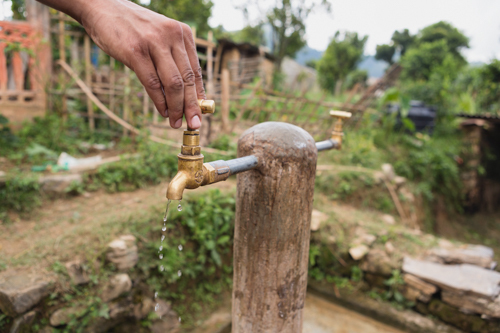 One of the 16 distribution taps providing drinking water to 32 households in Farmer Dilli Ram Regmi's community. 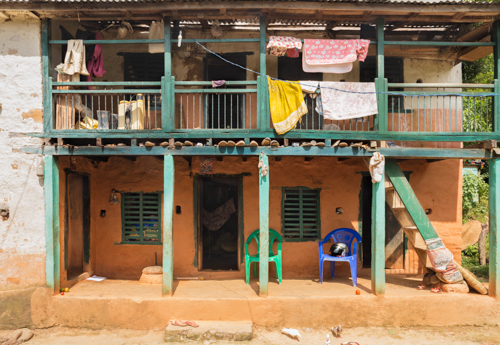 Dilli Ram Regmi's home. His family no longer feels safe staying in their home because it has cracked as a result of the April 25th Nepal earthquakes that hit the country. 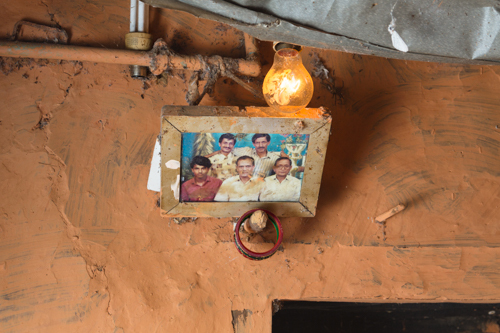 An old family photograph of farmer Dilli Ram Regmi and his farmers group inside the bedroom of his cracked house post earthquake. 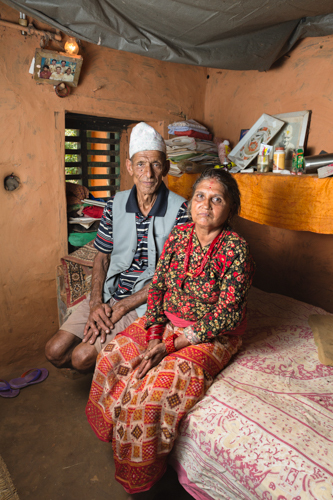 Dilli Ram Regmi and his wife Dil Mava Regmi inside the bedroom of their cracked house post April 25th earthquakes. 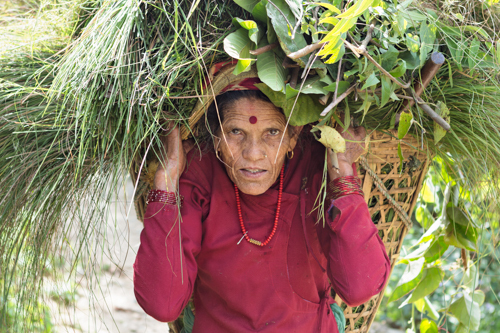 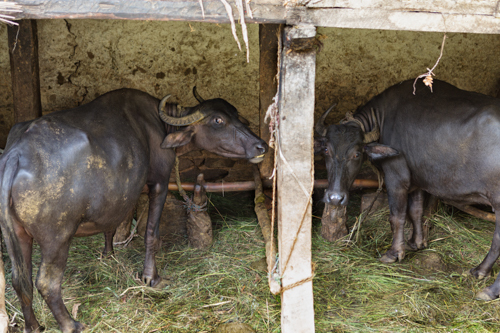 Livestock that Dilli Ram Regmi and his family tend to in Sirubari, Nepal. 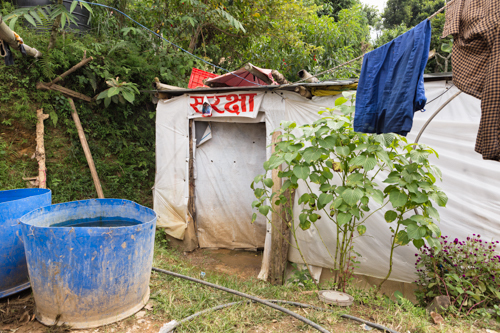 Dilli Ram Regmi and his family are forced to reside in this temporary shelter with the word "Safety" printed above the entrance. Their home was damaged and cracked as a result of the April 25th earthquakes. 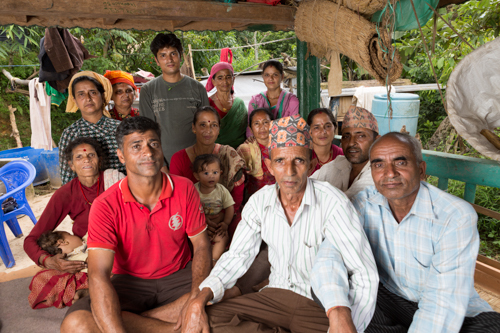 The community of farmers that live and work with Dilli Ram Regmi in Nepal.