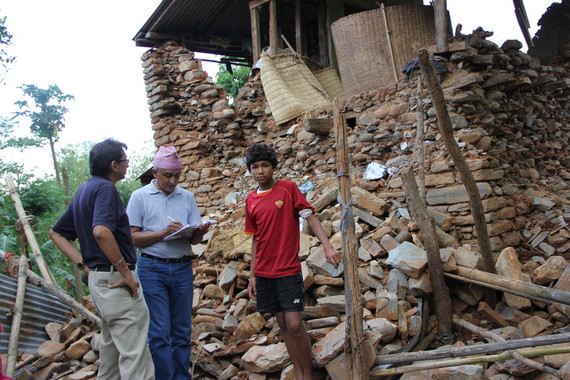 Lutheran World Relief staff members talk with a man in front of his home which was destroyed by the April 25 earthquake in Nepal.

After the devastating earthquake this past April, many Nepali people began to sleep outside. Some had no choice; their houses had been destroyed. Others felt the aftershocks and became rightly convinced that should another earthquake come, their homes would crumble. Now, there is rain over much of Nepal, which will be followed by downpours. Some areas could remain flooded for months. The shelter crisis created by the earthquake is getting worse.

In the days after the first earthquake, tent camps sprung up throughout the city of Kathmandu. The residents were a combination of survivors displaced from their now-destroyed communities at the foothills and mountainsides of the Himalayas, and local residents who either no longer had a home, or were too afraid to sleep inside the one they did have. Following the second quake on May 12, these makeshift camps seemed to double in size. Even hotel parking lots became temporary camp sites for displaced families.

My organization, Lutheran World Relief (LWR), quickly increased our presence in Nepal to maximize our relief efforts. In the immediate term, we focused on ensuring that people had food, basic sanitation, and access to water. But within weeks our attention turned as we looked toward summer and to what was quickly looming as a second, even more complex, threat. Monsoon season began, and with that, a massive shelter crisis. More than 500,000 homes were destroyed or badly damaged; for an estimated 8,000,000 people, the lack of safe shelter is both a physical and economic disaster happening right now.

To its credit, Nepal's government has tried to coordinate the humanitarian response. But no matter how fast we all move, we will be unable to get ahead of the seasonal shift. Monsoon season has hit significant and populated parts of Nepal that will be inundated with several feet of water for weeks or months to come. Logistical access is a major challenge, especially in rural areas. Changing climate conditions have seemed to prolong monsoon season in Nepal, making it more intense, as well as longer than its typical mid-June to mid-August season. And for people who live at higher elevations, it's getting colder.

So what do you do when you're sleeping outside and your village floods? The answer isn't clear or easy. Organizations like LWR, and many other relief agencies in Nepal, are doing our best to respond to that immediate need with temporary housing that can provide protection through the season, as well as cash-for-work programs that help support the local economies. Other organizations, like GeoHazards, out of the U.S., and the Nepalese National Society for Earthquake Technology (NSET) bring more specialized experience in addressing structural engineering needs for the long term.

In the long-term, Nepal must train masons to build homes structurally strong enough to survive an earthquake. The April earthquake was devastating, and since it sits on an active fault line, Nepal remains vulnerable to more earthquakes in the future. This engineering reality is not cheap and must reconcile cultural practices, economic realities at the household level, and donor constraints.

In the response to the earthquake, the international community has the opportunity to get this right. My organization is committed to Nepal for years to come, working to ensuring economic recovery and infrastructure improvements. In monsoon season, the rains wash out the roads that lead to remote, high-elevation communities. Every year that danger increases the vulnerability of communities on the hillsides, limiting their mobility, communications and access to markets for food and basic necessities. Their steep climb out of poverty is made more difficult.

This year that danger is compounded. When the earthquake destroyed homes, it destroyed crops too, and interrupted a critical time of the agricultural planting cycle. Earlier food stores were damaged in the quake, and what remains is unlikely to last families through the monsoon season. Many families do not have the income they need to buy the limited food that is making it to markets.

There is so much still to be done and it's the job of the international community to remain focused on Nepal, even after the news cameras have moved on. We have to work quickly to provide as much shelter as possible, and it has to be built with local support and trust. If we build homes that people believe won't survive an earthquake, people will not sleep in them, instead risking their health and their future in the cold, wet fields.

In the fall, we'll begin training masons who work in rural areas to build strong and lasting structures. For the next two months we'll focus on helping families survive to see those longer term victories.

Success comes when local groups, governments, and donors all understand the objectives and are working out of the same playbook. And since we know that this will not be Nepal's last earthquake, we have to reach toward lasting solutions. And that must be done together.