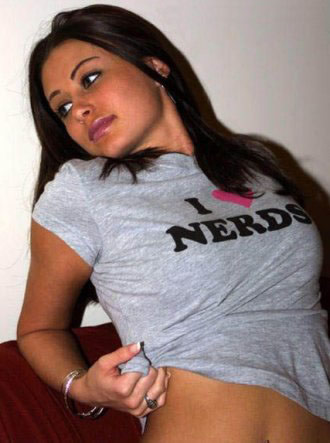 As his high school's nerdiest nerd, Edwin Thwacker never got much respect, until now -- the dweeb genius has devised a means of actually growing breathtakingly beautiful women -- from "supermodel seeds". "I wouldn't have believed it if I hadn't seen it with my own eyes," says a still-stunned Mike Levitan, captain of the football team at Kennedy High School, just outside Burlington, Vermont. "Four of the most beautiful women I've ever seen walk Thwacker to school every day and then meet him afterwards to walk him home. I mean, before all this happened, the highlight of Thwacker's daily social life consisted of getting his head held down in the toilet as we flushed it."

Although Thwacker may well have been the king of his school's geeks, he's also one of its smartest students. He's a National Merit Scholar, a junior Phi Beta Kappa, a member of the National Honor Society, maintains an A+ average for all his advanced placement courses, and has been offered a full scholarship to Harvard University.

Thwacker's special area of interest and expertise is science, particularly biology and botany. He combined that interest with his lack of any social life, and with the fact that no female student would even speak to him -- to come up with his idea for growing his own gorgeous dates from "supermodel seeds".

Thwacker admits that it took him many, many months of trial and error before he achieved success. He explains the process: "Well, let me just say that I'm not going to reveal the specifics, as I've taken out a patent on it, but in general, here's how I did it. First, I wrote to every supermodel I could, telling them that I was a big fan of theirs and asking for one strand of their hair. About half of them responded, sending the hair, but that was plenty. Next, I extracted the supermodels' DNA from their hair, injected the DNA into seeds, planted the seeds in a specially formulated mixture to encourage human growth, and awaited germination."

A few months later, the seeds poked their little heads up and Thwacker clearly saw the beginnings of his women. In just a few months, four women who are genetically identical to supermodels were fully grown. Thwacker taught them and trained them himself. "Their only desire is to give me non-stop pleasure," Thwacker reveals. "And the only conflicts they have is arguing over who gets to pleasure me for the night. The only way to end their bickering is to invite all four of them into my bed."

Thwacker admits experiencing a bit of "social life whiplash." He states, "I never had a social life before. Now, it's non-stop sex with super-models every morning and every night. I never thought I'd say this, but there really is something more enjoyable than researching molecular biology!"