All across the United States, rooftop solar panels are popping up on homes, businesses and schools like mushrooms in a forest, and utility-scale solar projects are bringing huge amounts of clean energy into our communities. Why? Well, among other things, consumer choice in America is something that we all hold very sacred. 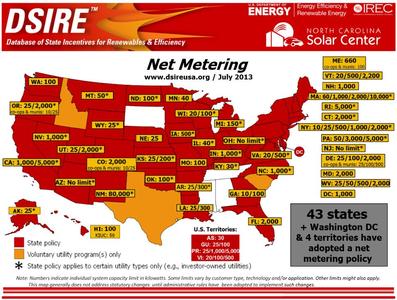 Part of this amazing success story can also be attributed to the fact that the average cost of a solar system has dropped by nearly 40 percent over the past two years and by a whopping 50 percent since 2010. As a result, American consumers, businesses and schools are flocking to rooftop solar. According to the most recent statistics, the residential market alone grew by 48 percent in the second quarter of 2013 compared to the same time period a year ago. That's nothing short of remarkable.

NEM has significantly contributed to this growth. Simply put, NEM is a credit on your bill that represents the full value of electricity delivered. Think of it this way: surplus energy generated by a home or business system is exported to the electricity grid, allowing a consumer's meter to spin backwards. This allows the homeowner or business owner to have greater control over their energy use and prices. That's literally the definition of "consumer choice."

As an association which represents more than 1,100 member companies across America, we strongly support NEM, which is now a fundamental policy - and a fundamental right - in 43 states, Washington, D.C. and four territories. Specifically, SEIA's Net Energy Metering Guiding Principles protect consumers by defending their:

In many ways, these principles represent a sort of Solar Bill of Rights. As an organization, SEIA is committed to defending American consumers and businesses by protecting, strengthening and expanding NEM policies all across the United States. Today, these forward-looking, common-sense policies are saving Americans money, creating good-paying jobs in their communities, providing a shot-in-the-arm to the U.S. economy and helping to combat climate change. If that isn't worth fighting for, then what is?