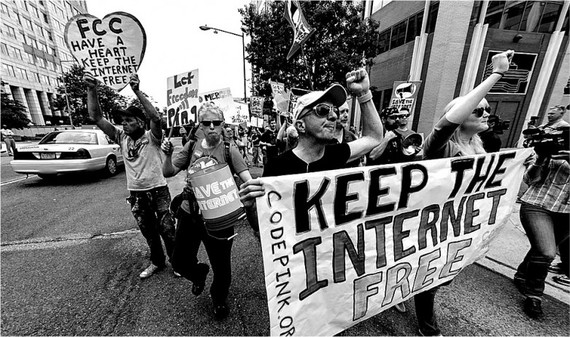 The people (millions of them) have spoken. The FCC has spoken (in what is arguably the most important vote in the agency's history). And now the court has spoken: Net Neutrality and Title II are the law of the land.

On Tuesday, the U.S. Court of Appeals for the D.C. Circuit rejected industry's challenge and upheld the FCC's Open Internet Order in its entirety, saying the agency exercised its proper authority when it reclassified broadband internet access as a telecom service under Title II of the Communications Act.

This solidifies last February's victory at the FCC. It's also a huge defeat for the phone and cable companies that have tried to overturn the FCC's rules using any means possible.

Here are the most significant victories in the court's decision ...

Title II Is the Foundation

The court's decision reaffirms what millions of internet users have been saying for years: Broadband internet service providers have to carry our speech, and can't mess around with it. Companies like Comcast are common carriers and should be treated that way under the law.

Take the agency's proceeding on broadband-user privacy. In March, the FCC issued a Notice of Proposed Rulemaking on ways to better protect internet users' private information from misuse by their ISPs. Now that effort can keep moving toward successful rules implementing those protections.

And this is just the beginning. The FCC's Lifeline program has always provided subsidies for telecom services, and today's decision makes it perfectly clear that broadband internet access is eligible for the same kind of support. Now the agency can address issues of access, competition and broadband affordability more broadly. Addressing data caps, zero-rating and more are within the FCC's authority under its Net Neutrality rules and under Title II as well.

ISPs are conduits, not speakers

The court's decision shot down one of the more dangerous arguments made by industry attorneys -- that ISPs are like newspaper editors, and, as such, have the free speech right to "edit" the content that flows over their networks.

Companies like Comcast and Verizon work as conduits for your speech. When they're providing internet access they're acting as common carriers, not as speakers themselves. The ISPs' line of argument on this point is particularly troubling. When they argued against Net Neutrality in a 2013 court proceeding, Verizon's attorneys declared that, absent Net Neutrality protections, the company fully intended to pick and choose which content got favorable treatment online, and which content did not.

Today's decision is a huge victory over these dangerous claims. As common carriers, ISPs carry free speech. But they aren't the internet's editors, and can't filter or block access to content they don't like.

The court's ruling is a major victory for all businesses, people and organizations that use the internet every day to communicate, work, learn and more -- but it's especially important for communities of color. The internet isn't a luxury; it's a critical tool for free speech and communication. Securing real and lasting Net Neutrality rules ensures the internet will remain an open platform for people the media shut out and ignore.

"Today's decision is a decisive victory for those who rely on the open internet to express themselves, organize, make a living, participate in policymaking, get a job, earn an education and do all of the critical things that we so often take for granted," said Michael Scurato of the National Hispanic Media Coalition. "Hopefully, rather than continuing to fight this losing battle against openness, entrepreneurship and innovation, opponents will now turn to constructive endeavors, like making sure that everyone in this country can access affordable broadband."

While companies like AT&T, Comcast and Verizon may continue their efforts to control what we say and do online, they're running out of places to make their bad arguments.