TEL AVIV -- The nuclear agreement reached by Iran and the five permanent members of the United Nations Security Council (China, France, Russia, the United States and the United Kingdom), plus Germany, is not about Iran's capitulation, as Israeli Prime Minister Binyamin Netanyahu wished. And it is about as imperfect as any negotiated agreement between disputing parties can be. Nonetheless, it creates a solid framework to prevent Iran from producing nuclear weapons for the next 10-15 years -- and that is a very positive development.

Netanyahu, if he wished, could take a lot of the credit for this achievement. Had he not fueled global hysteria over Iran's nuclear ambitions, the crippling international sanctions regime that eventually pushed Iran to a deal might never have been implemented.

But Netanyahu has stubbornly insisted that the agreement is a strategic fiasco, citing its ambiguities in matters such as the mechanism of inspection, the number of centrifuges Iran will be allowed to maintain and the conditions for reimposing sanctions if Iran breaches the accord. In pursuing this course, Netanyahu has not only missed the opportunity to claim a major diplomatic victory; he has also reinforced Israel's international isolation.

Netanyahu is now doing all he can to persuade the U.S. congress to pass a "resolution of disapproval." This is highly unlikely to occur, especially in an election year, given that it would require 13 Democratic senators and 48 Democratic representatives to break with U.S. President Barack Obama. Indeed, Netanyahu's effort is succeeding only in turning Israel into an increasingly divisive partisan issue in U.S. politics. That is a dangerous game: The U.S. has broken with the international community to support Israel in the past; it is less willing to do so today.

"The U.S. has broken with the international community to support Israel in the past; it is less willing to do so today."

Even if Netanyahu managed to secure such a congressional resolution, doing so would not serve his interests. Given that the resolution would affect only U.S. sanctions, it might not nullify the agreement, with the lifting of sanctions by all other international powers proving sufficient motivation for Iran to uphold its end of the bargain. Worse, Iran could then decide to gallop toward the bomb, now with the support of countries like China and Russia, within an increasingly fragmented international system.

Despite the obvious problems with Netanyahu's position, dismissing it would be a mistake. Contrary to popular belief, he is not just a cynical politician in search of an agenda to deflect attention away from growing domestic problems and the conflict with Palestine. His obsessive focus on Iran -- not to mention the seemingly irrational calculus that is driving him toward a politically suicidal confrontation with the U.S., his country's most important benefactor -- stems from deep-rooted convictions, a system of political thought and his own perspective on Jewish history.

Netanyahu is an ideologue of Jewish catastrophe. His view of Jewish history reflects that of his father, the historian Benzion Netanyahu, who went to America in the 1940s to challenge the Allies' failure to rescue European Jewry from the Holocaust, and thus to mobilize support for Zionism. In fact, Netanyahu remembered his father's efforts in his address to the U.S. Congress last March.

But Netanyahu goes a step further than remembering the past. Zionism was supposed to enable the Jews to break with their history. Netanyahu, however, has imbued the Israeli state's existence with all of the Jewish people's past anxieties, pains and struggles. It does not matter that Israel possesses, according to foreign sources, a nuclear arsenal, as well as a robust economy and a strong alliance with the world's most powerful country; for Netanyahu, it is essentially an old Jewish ghetto, attempting to hold out against relentless threats.

"Netanyahu is an ideologue of Jewish catastrophe."

In this Hobbesian worldview, the threats can stem from virtually any development -- political, strategic, or otherwise -- and amount to existential challenges to the entire Jewish nation. The only way to avoid catastrophe is to remain constantly vigilant.

By this logic, risks and challenges cannot be approached with a view toward resolution; they must be held up as reminders for the Jewish people to keep up their guard. Netanyahu would dismiss as political lunacy the notion that the nuclear agreement opened a 10-15-year window for creative statesmanship to reshape regional politics. A regional system of peace and security based on an accord with Arab countries that includes nuclear non-proliferation is, he would argue, the agenda of naïve dreamers, not of a leader so aware of the lessons of Jewish history.

Palestine is no different from Iran, from this perspective. The Palestinian conflict is unsolvable, too; at best, it can be managed. With Hamas control in Gaza reinforcing the view of Palestine as a threat, the issue galvanizes the Israeli-Jewish nation.

If Israel is to reverse its shift toward international isolation, and help build a stable regional security environment, it must change its approach. Paranoia and antagonism must give way to sober politics, with Israeli leaders discussing potential strategic compensation with the U.S., working with other powers to address Iran's support for Hamas and Hezbollah, and considering a credible revival of peace negotiations with Palestinian President Mahmoud Abbas.

Israel's Labour Party, which is now debating whether to join Netanyahu's government, should consider carefully whether it can bring about such a shift. If it cannot, and no other force emerges to do the job, Netanyahu's prophecies of doom risk becoming self-fulfilling.

Netanyahu Is the Horseman of the Jewish Apocalypse
Netanyahu's UN address 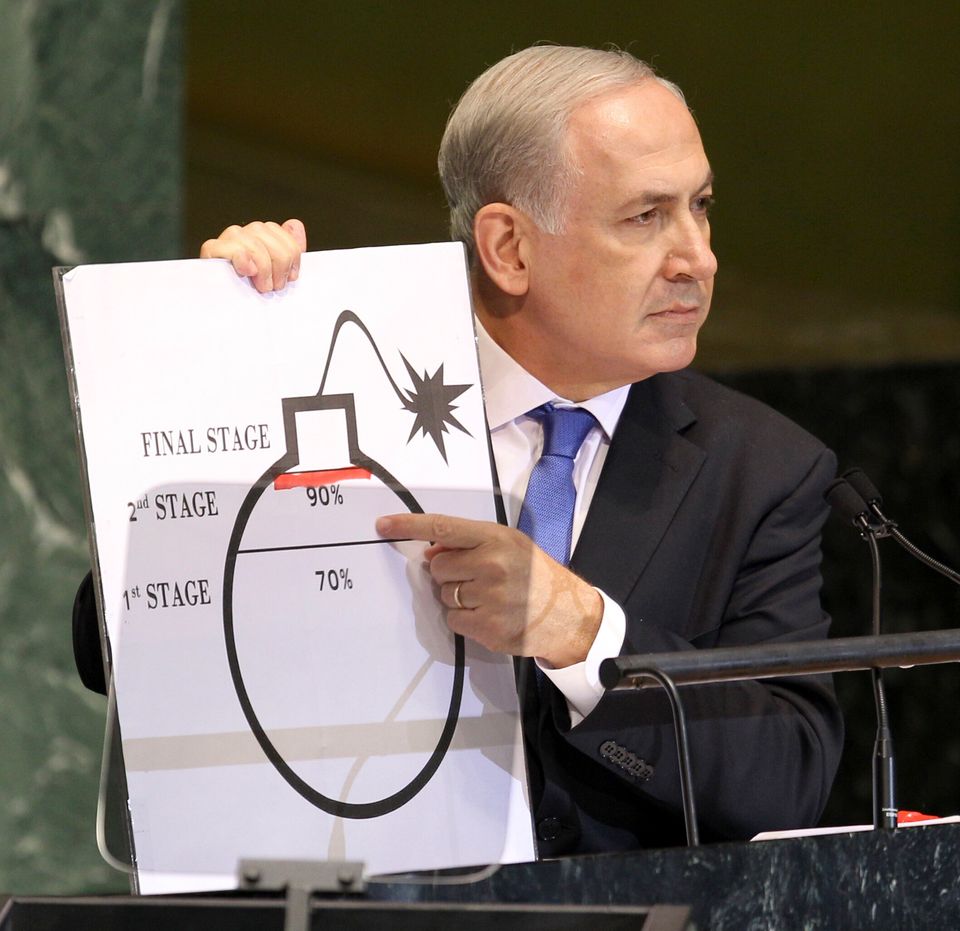 1 / 19
Benjamin Netanyahu
Prime Minister Benjamin Netanyahu of Israel shows an illustration as he describes his concerns over Iran's nuclear ambitions during his address to the 67th session of the United Nations General Assembly at U.N. headquarters Thursday, Sept. 27, 2012. (AP Photo/Seth Wenig)
AP