Americans think that it was a breach of protocol for House Speaker John Boehner (R-Ohio) to invite Israeli Prime Minister Benjamin Netanyahu to speak to Congress, but they still want members of Congress to attend his speech, a HuffPost/YouGov poll finds.

Despite disagreeing with the handling of the invitation, though, Americans were also more likely than not to say U.S. politicians should still meet with Netanyahu during his trip.

Forty-six percent said that their member of Congress should attend Netanyahu's speech, which is scheduled for March 3, while just 24 percent said they shouldn't, with another 30 percent unsure. Fifty-eight percent said President Barack Obama should meet with Netanyahu, with only 19 percent opposed and 23 percent not sure.

The White House announced in January that Obama will not meet with Netanyahu during the visit, citing the upcoming Israeli elections.

A number of Democrats in Congress have said they will skip the Israeli prime minister's speech. Rep. Keith Ellison (D-Minn.) told The Huffington Post on Tuesday that he and more than 20 other members of Congress had signed a letter to Boehner urging him to postpone the speech until U.S. diplomatic negotiations with Iran are complete. 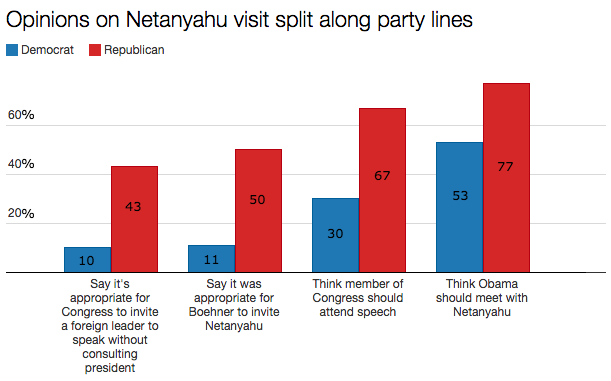 The public is about evenly divided on whether Obama or congressional Republicans do a better job of handling U.S.-Israel relations, with 24 percent naming Obama, 26 percent the GOP, and the other 50 percent unsure or saying neither is better.

Republicans, though, are more likely to stand behind their party's performance. While just 3 percent in each party named the other party as doing a better job, Democrats were more likely to say neither was better or to be unsure. Sixty-three percent in the GOP said congressional Republicans do a better job of handling relations, and just 49 percent of Democrats said the same of Obama.

The HuffPost/YouGov poll consisted of 1,000 completed interviews conducted Feb. 4-8 among U.S. adults using a sample selected from YouGov's opt-in online panel to match the demographics and other characteristics of the adult U.S. population.