Nearly half of Americans disagree with Republican's Netanyahu speech invite, with Democrats being more in dissent. Republicans rate Netanyahu more favorably. And with few following the DHS funding battle, beware of polls predicting reactions. This is HuffPollster for Monday, March 2, 2015.

NBC/WSJ FINDS DISAPPROVAL OF GOP'S NETANYAHU INVITATION - Mark Murray: "Nearly half of American voters — 48 percent — say that congressional Republicans should not have invited Israeli Prime Minister Benjamin Netanyahu to address Congress on Tuesday without first notifying President Barack Obama, according to a new NBC News/Wall Street Journal poll. By contrast, 30 percent of those polled believe the invitation was fine, and another 22 percent don't know enough to say either way. Not surprisingly, the issue breaks along partisan lines, with 66 percent of Democrats saying Republicans shouldn't have invited Netanyahu without first notifying the president, compared with just 28 percent of Republicans who say that." [NBC]

Netanyahu's favorable rating has improved since August... - Rebecca Ballhaus: "Despite the lack of support for the invitation to Mr. Netanyahu, the share of Americans who have a favorable view of the prime minister has grown since last August. The latest poll finds that 30% have a positive view of him, up from 24% in August. Some 17% in the new poll had an unfavorable view of Mr. Netanyahu. Driving that increase in the prime minister’s ratings was an improvement in Republicans’ view of him. In the latest poll, 49% of Republicans said they had a positive view of Mr. Netanyahu, up from 36% in August. Democrats’ view of him has stayed fairly consistent, down to 12% from 13% in August." [WSJ]

Gallup also shows Netanyahu rating up since 2012... - Andrew Dugan: "[N]early twice as many Americans view Israel's leader favorably (45%) as unfavorably (24%). Netanyahu's favorable score is up from 35% in 2012. His current favorable rating ties his highest rating among the six times Gallup has measured it, spanning his three tenures as prime minister…...Republicans are much more likely to view Netanyahu positively (60%) than negatively (18%), while Democrats are evenly divided in their views of him: 31% favorable and 31% unfavorable. Independents' favorable ratings of Netanyahu are twice as high as their unfavorable ratings..[H]is favorable rating has improved among all major party groups since 2012. The increase has been slightly higher among independents (+13 points) and Republicans (+10 points) than Democrats (+6 points)." [Gallup] 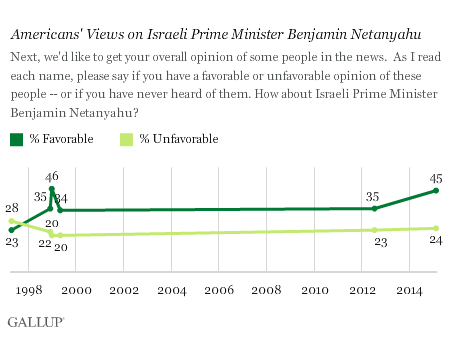 ...But YouGov shows Democrats souring on Netanyahu since since January - Kathy Frankovic: "In the latest Economist/YouGov Poll Democrats have taken a decidedly negative view of Netanyahu; not only is it worse than Republican opinion, it is a change from just a month ago. A month ago, their opinion was mixed, but now they are clearly negative. Republicans remain favorable about Netanyahu by nearly five to one (51% are favorable, 11% are not); in fact the percentage of Republicans with a negative view has dropped seven points since January. Democrats view Netanyahu as having damaged U.S.-Israel relations by more than two to one. Republicans overwhelmingly disagree." [YouGov] 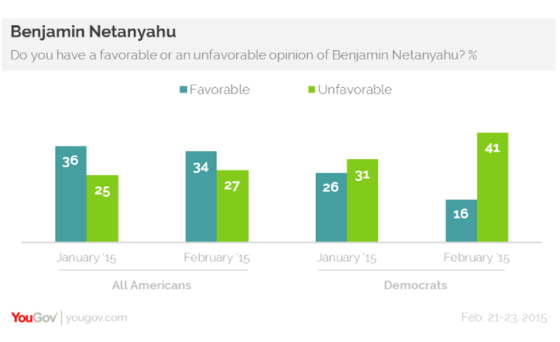 Older Americans have grown more favorable to Israel -Lydia Saad: "From 2002 to 2004, younger adults -- those aged 18 to 29 -- were slightly less likely than middle-aged and older adults to favor Israel, but since 2005, their views and those of Americans aged 30 to 49 have been virtually identical. At the same time, adults aged 50 and older have become more likely to favor Israel -- with their support rising about 10 percentage points since 2007…[T]he increase since 2009 in older Americans' sympathizing with Israel has occurred among all party groups. Also, since the start of the new millennium, support for Israel is up 13 percentage points among Republicans 50 and older (from 71% to 84%), 15 points among older independents and 10 points among older Democrats. Meanwhile, among 18- to 49-year-olds, support since 2001 has increased among Republicans and independents, but has been flat among Democrats." [Gallup] 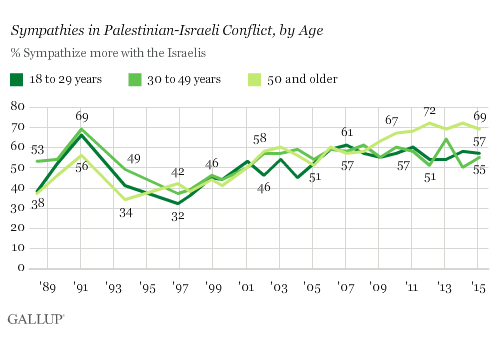 CHICAGO RUNOFF: EMANUEL AT 43 PERCENT - Paris Schutz: "A new poll concludes that Mayor Rahm Emanuel is 'very likely' even with challenger Jesus 'Chuy' Garcia. The poll, conducted by Ogden Fry, shows Emanuel up 43 percent to 38.5 percent, with 18.6 percent undecided. But, the pollster says the race is even closer than that because his data shows that Hispanics have historically been underrepresented in polls." [WTTW, Ogden-Fry]

WHY DHS SHUTDOWN REACTION POLLS ARE SHAKY - HuffPollster on reasons to be cautious about polls predicting reactions to a DHS shutdown: "First, and most important, relatively few people have been following the story closely. This week's HuffPost/YouGov poll found a mere 12 percent who said they were following the story closely and just 40 percent combined who were following it closely or somewhat closely....Similarly, that poll found most Americans were unaware that immigration lies at the heart of the congressional dispute....Put more plainly, the biggest problem with who-might-be-to-blame questions is not the omission of one possible answer. It's that they pose a hypothetical query about something that most Americans are not thinking about. Results will vary depending on how hard the questions (or interviewers) push for an answer....Equally important: People are not good at predicting their future attitudes." [HuffPost]

-Rand Paul wins the CPAC straw poll for the third year in a row, with Scott Walker in second. [WashPost]

-The Republican presidential field is historically crowded and unpredictable. [538]

-Conservatives are more likely to believe that vaccines cause autism. [WashPost]

-Seventy-four percent of U.K. adults say the dress is blue and black. [YouGov]