Pretending to be a fictional character or offering dating advice would probably get you reprimanded -- or possibly fired -- from the customer service department of most companies.

At Netflix, taking on the persona of a Star Trek captain during a live chat with a customer gets you on national TV, a trip to Netflix headquarters in California, your very own captain's shirt and an iPad mini.

Such is the story of Mike Mears, a Denver-based Netflix customer service representative and Star Trek fan. Earlier this month, Mears started a chat with "Norm," a Netflix customer who was having a problem streaming "Parks and Recreation." 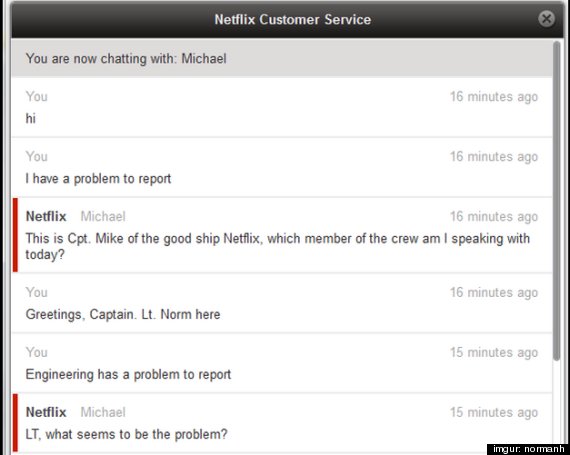 They both stayed in character the whole time, and after the transcript of the conversation landed on Reddit, websites around the world picked up the story. Mears was even interviewed on cable news channel HLN alongside William Shatner, who played Captain Kirk in "Star Trek."

The exchange resonated with anyone who's ever sat through the hell of an automated customer service call, and it's one example of how Netflix is aiming to do something different with its customer service. Netflix help chats don't feature a robotic, dizzying array of menu options, or a company agent using a script.

"We really allow support agents to be themselves," Brent Wickens, Netflix's vice president of global customer support, told The Huffington Post in a recent interview. "They're not restricted in any way. If somebody wants to talk to somebody in character, we encourage this."

The company's quirky, beloved approach to customer service may help give it an edge as it battles for viewers in an increasingly competitive field. Although Netflix is the biggest name in town when it comes to subscription streaming services, it faces growing competition from Hulu Plus and Amazon. All three companies are investing heavily in original content and exclusive streaming deals to lure and hold on to subscribers.

Even though Netflix continues to add members -- it recently surpassed HBO in terms of paid U.S. subscribers -- the company is bleeding money on content and international expansion, as BuzzFeed's Peter Lauria recently pointed out. As a result, it made a relatively small $31.8 million in profit on $1.1 billion in revenue last quarter. Netflix must keep adding subscribers -- and keep the ones it already has -- to offset its spending spree.

One way to do that, of course, is to have great customer service to keep users happy and loyal.

"In some circumstances a customer that has a problem that has recovered delightfully can actually leave that interaction more satisfied than a customer who didn't have a problem in the first place," said Ryan Buell, an assistant professor at Harvard Business School who studies the relationship between customers and businesses.

One way Netflix delights is by not forcing its customer service agents -- most likely the only Netflix employees customers will ever speak to -- to follow that many rules. Apart from asking customers to take a one-question survey at the end of the call or chat, they can say pretty much whatever they want. Since Netflix is focused on streaming -- which costs $7.99 per month -- there's no pressure to get a customer who calls to add a service or buy into a more expensive plan. Agents are encouraged to solve a customer's problem without transferring him or her to another representative. If someone wants to cancel their subscription, agents don't push that person to continue with the service.

Ramon Icasiano, who headed Netflix customer service from 2001 to 2006, said that Netflix founder and CEO Reed Hastings would sometimes take customer calls -- something Netflix says he still does to this day.

"For us it was a sense of pride," Icasiano said, adding that he doesn't recall Hastings identifying himself as the company's CEO during the calls. "I took it as more of 'here's someone who's so interested in improving the customer experience that he would not be afraid to talk to his customers.'"

One former Netflix customer service agent, who asked not to be named because he was unsure of the company's press policy, said that agents were allowed to joke with customers as much as they wanted. Netflix, he said, encouraged agents to have "at least one moment in a phone call where you would relate to a customer."

"Netflix really wanted to destroy the image of the modern call center, of calling in and talking to a robot," the former call center employee, who said he was paid $13.25 per hour, told HuffPost. "They wanted it to be a personal experience that the customer could look back on fondly."

Netflix is known for its "freedom and responsibility" culture. The company famously has no vacation policy, something that is outlined in the so-called "culture deck," a 126-slide presentation which Facebook executive Sheryl Sandberg said "may well be the most important document ever to come out of the Valley."

Although the entire presentation doesn't apply to all support staff -- many are paid hourly and they're a mix of Netflix employees and contracted employees -- Wickens said that the values and overall principles of freedom and responsibility outlined apply to the representatives.

"The responsibility is to solve the problem and the freedom is to do it your way," Wickens said. He added that the customer service mantra at the company, which "is the type of things we put on posters," consists of three elements: "solving the problem," "have fun and be yourself," and "keep it easy, keep it simple."

"What we don't want are agents coming on and feeling like they have to say something that's scripted or feeling hurried," he said.

The former Netflix customer service agent described the call center environment as "insanely stressful," not only because angry and frustrated people sometimes treated him "like a punching bag," but also because of Netflix's high expectations for its employees.

An agent's job performance is measured on customer dissatisfaction, which comes from the survey at the end of a call or chat that simply asks whether a customer was satisfied with the Netflix service experience. There's a goal to keep the percentage of people who answer "no" at around 5 percent. And although there is no limit on how long an agent can take to resolve a customer's issue, the former representative said employees have a goal to answer support questions in under five minutes.

"From a customer perspective, we believe an efficient call is a better call," Netflix said in a statement when asked about that number. "This supports our simplicity bias in the customer experience, partnered with accuracy and finding your own voice."

Although the former service rep said he was ultimately fired for taking too many sick days after working at Netflix for just under a year, he had good things to say about his experience there.

"There was always a strong emphasis on positivity and empathy and the freedom to interact like real, genuine people," he said. "Once you felt it out with a customer, you wouldn't get in trouble for joking around with them and talking about some movies, as long as you were going to meet the goals for your metrics."

Netflix isn't the only company to take an unconventional approach to customer service. Zappos, the online retailer that was bought by Amazon in 2009, is famous for having customer service agents who, well, act like real humans. Like Netflix reps, Zappos agents don't follow a script, and there's no time limit on calls or chats. And some of the Zappos exchanges have become the stuff of legend: Zappos reportedly overnighted and paid for a pair of shoes for a best man who needed kicks for the wedding, and last year, a customer service phone call lasted for longer than 10 hours.

Netflix's approach to customer service may have contributed to its position as one of the most-loved brands in a recent survey from APCO, a public relations firm. But it's also, of course, good for business. Netflix only makes money from subscribers, so it's essential that people are happy with the service and keep paying for it each month.

Netflix and Amazon both have 24/7 customer support by phone and live chat, while Hulu Plus agents are available by phone or email during operating hours (17 hours on weekdays and 16 hours on weekends). Reaching an Amazon representative on the phone requires a few steps online, and the company calls customers, rather than providing a phone number. A recent request to Amazon's customer service line yielded an immediate response via phone. A call to Hulu did require a short hold, but it was not near the estimated seven minutes that was quoted online.

Neither Hulu nor Amazon responded to inquiries from HuffPost about whether their customer service agents follow scripts or have time limits when answering customer calls.

In a recent live chat, a Netflix customer service representative responded immediately to the help request. The agent, Bill, offered a welcome to his "Netflix temple of knowledge" and asked how he could "restore the balance today." A phone call to the customer support line included just two automated questions: one about whether the account had DVDs and one to get the account service code. After that, the call was answered on the second ring.

Many callers to Netflix customer service probably aren't looking for any dating advice, but it's nice to know that if they do, all they have to do is ask. 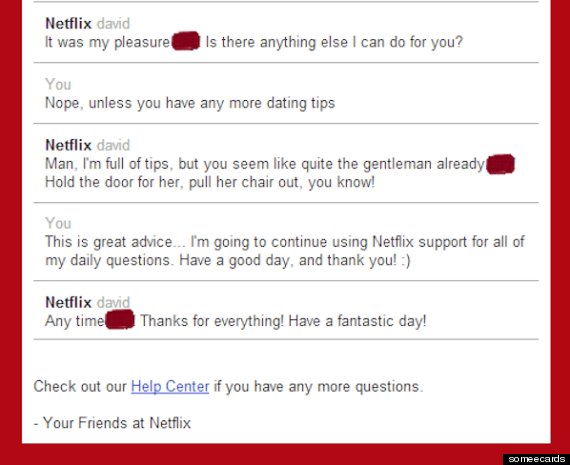