Netflix just launched the latest volley in the boiling battle between the movie-streaming company and the Internet providers who want to charge them by the bit.

Netflix published a report card on Thursday rating different Internet service providers on their ability to deliver the streaming power the company depends upon.

"As we continue to stream more and more great movies and TV shows, we find ourselves in the unique position of having insight into the performance of hundreds of millions of long duration, high-definition video streams delivered over the Internet," wrote Netflix's director of content delivery in a blog post."The throughput we are able to achieve with these streams can tell us a great deal about the actual capacity our subscribers are able to sustain to their homes."

The information they've provided may seem frustratingly oblique to many. The ranking tests HD streams, which use about 4800 kilobits per second, for how consistently high a stream, on average, Internet providers are able to provide through the viewing experience.

Charter, the fourth largest company in the country (by revenue) won out, with cable giant Comcast coming in at number two. Verizon and AT&T were in eighth and ninth places, respectively. (See chart below)

Most users don't stream at 4,800 kilobits throughout a movie--they usually switch between bit rates as the movie goes on. The higher the bit rate, the better the quality of the movie. Other factors, like location and variety of network (DSL, wireless, cable) can also affect the stream. But the newly released data will help viewers understand better what the quality they receive means in terms of their cable company's performance.

For the average viewer, the data as presented may be too dense to make much of an impression.

Netflix and ISPs are butting heads behind the scenes. The technical squabbling relates to costs incurred by each side for delivering data, as well as the differences between how Netflix and the cable companies want to share the costs involved.

"Today, some ISPs charge us [...] to let in the bits their customers have requested from us, and we think this is inappropriate," CEO Reed Hastings said in a letter to shareholders. Emphasizing that Netflix pays for the getting the bits to the regional interchanges (companies like Level 3), he underlined what he saw as an improper share where ISPs require Netflix to pay further to let in their bits even after they had paid the cost to get them to the intermediary.

"We think the cost sharing between Internet video suppliers and ISPs should be that we have to haul the bits to the various regional front-doors that the ISPs operate, and that they then carry the bits the last mile to the consumer who has requested them, with each side paying its own costs," he said.

The report seems to be a warning to cable companies. By ostensibly providing users with a way to judge just how well their company is doing, Netflix is delivering a not so subtle warning that they will involve the viewer in their argument with big cable.

Hastings' letter framed the ISP data dump as a way to empower customers to make decisions about their cable. He called the report one in a series of "ongoing performance statistics about ISPs collected from our 20 million subscribers detailing which ISPs provide the best, most-consistent high speed Internet for streaming Netflix." The great fear, for Netflix, is that cable carriers will begin to charge per-gigabyte--a shift from the current model where data is unlimited up to a large cap.

See the chart from Netflix below. See the full size version here. 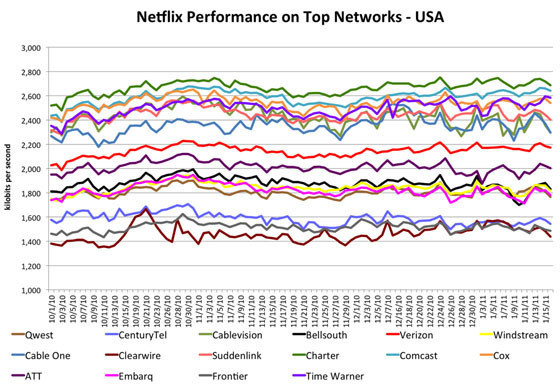