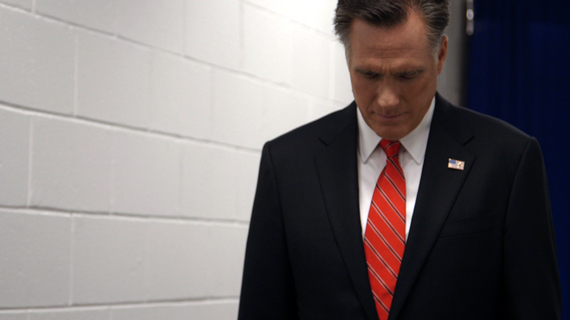 Hunched over in a dimly lit hotel room, surrounded by his family, a defeated Mitt Romney realizes he's lost the 2008 Republican nomination to John McCain. "I didn't even want to go to [campaign] events," he says. "'Let me tell you how I'm gonna win this!'" He shakes his head doubtfully. "I can't fake it." Someone off screen quickly interjects, "You need to go to bed."

This is one of only a handful of vulnerable moments in Mitt, the Netflix documentary that aired Friday, January 24 that takes a "rare, intimate look" at presidential candidate Mitt Romney's life, beginning with his run for the Republican nomination in 2008 and leading up to the 2012 presidential election—where Romney openly expresses self-doubt. He doubts himself, his candidacy, even referring to himself as a "flawed candidate" in 2008 because of his reputation for being a flip-flopper (which is only loosely dealt with in the film, never directly addressed).

It's evident in the documentary how both impressed and intimidated by Obama Romney is, noting that the president "changed the race" in 2008, and was "better than the other guys" when it came to debating. Before Romney's second presidential debate with Obama in 2012, Romney sounds overwhelmed by the format of the debate, wary of whether or not he could clearly state his point of view for the audience while relating to the questioner and challenging his opponent all at the same time.

None of this seems to come easily to Romney. He even complains about how many debates are planned. And he is very concerned about having a solid "brand name." You can tell Obama's gotten under his skin. These are the moments in Mitt where we see a daunted side of Romney his campaign strategists wouldn't let us see, because it would have been hard to "Believe in America," if the candidate didn't even really believe in himself 100 percent of the time.

Even Romney's family -- the central focus of the film -- continually express doubt about winning, or wanting to win, the presidency. His son Josh questions whether or not the American people will ever embrace his dad and stop criticizing him (again, not directly addressing the critiques), saying "This is why you never see any good people running for president." During a family meeting, where the Romneys discuss whether or not Mitt should run for office, Romney's daughter-in-law Jenn says one downside to him running for president would be that he'd "have to be president," adding: "Emotionally, it'll be hard on everyone." The quiet room doesn't quickly combat this sentiment. Few in the circle offer many good reasons for Romney to run except that it's his "duty to the American people and God." They all seem to know it's already coming and they can't stop it whether they'd like to or not.

Despite exposing some of the candidate's uncertainty, documentarian Greg Whiteley is clearly a fan of Romney's, and edits the footage to portray the former governor in a very warm and fuzzy light for most of the film -- glossing over the whole 47 percent debacle and the issue of Romney's changing political views, instead showing shots of Romney wearing torn ski gloves patched up with duct tape and eating in fast food restaurants, just like a regular ol' guy and not a man with cars that have their own personal elevators.

During a conference call held days before the film aired, director Whiteley claimed he just "faded into the wallpaper" when filming, but he appears to be well integrated into the Romney family. At one point, one of Romney's grandkids shouts "Hi, Greg!" toward the camera, before Romney scoops the boy up into his arms, making him the 100th toddler Romney hugs, hive-fives or tussles with in the 90-minute documentary.

Aside from some real moments capturing the Romneys' fears and insecurities, Mitt pretty much depicts Romney as any Republican campaign ad would: a God fearing, down-to-earth family man who can really relate to the plight of small business owners. (Despite being born a millionaire and co-founding Bain Capital, where he made millions whether a small business went under or not.)

What is surprising is that after six years of following the Romneys, collecting hundreds of hours of footage, the documentarian still chose to include a random interview with a production guy at a 2008 debate, who talked about lighting adding "drama," and a nearly two-minute-long conversation between Romney and his son Tagg about whether or not the Delta terminal at LaGuardia Airport had a large food court. We're supposed to believe there wasn't anything more interesting than that lying around on the cutting room floor?

While the film was expected to be an "exclusive" and "behind-the-scenes" look, it included a lot of already-aired debate footage and seemingly staged conversations between family members before and after each debate. Babies bounce on knees, Romneys kneel on hotel room floors in prayer, Ann looks stressed and cries occasionally. The documentary moves slow and is captivating only some of the time.

Romney is still, for the most part, Romney: stiff smile and jilted laugh. Of course he loves his family dearly and that's obvious, but the public never really doubted his love for family or God—which is pretty much entirely what Mitt focuses on -- they doubted what he stood for, they doubted his ability to empathize with a majority of Americans, and they doubted whether or not he was actually alive with a heart and soul and there wasn't a Weekend At Bernie's situation happening. After watching Mitt, I'm still not sure.

Maybe the Romneys really are an example of Rockwellian bliss, solving their problems with a prayer and a quick toboggan ride, or Whiteley is a fanboy who enjoyed living out a personal dream of following his idol around for the better part of a decade. All in all, this documentary is pretty dull, however it did serve to confirm why Romney lost: his inability to identify what it was he stood for and stand firmly behind it.