The 1989 film Field of Dreams, about the realization of one man's hallucinatory vision to build a baseball field for the good of his family and community, was a fantasy–but it serves as an exquisite metaphor for something real, and awesome, happening today in the world of brain health. As the CEO of the brain health research nonprofit One Mind, General Peter Chiarelli (Ret.), U.S. Army, wryly observed during the fifth annual One Mind Summit last week, if you build something worthwhile, people may come to use it, for the greater good of all.

Too many in our society are facing debilitation, discrimination, and suffering due to brain health challenges. The World Health Organization estimates that one quarter of the world population experiences a psychiatric or neurological disease during their lives, and the CDC estimates that around 2.5 million U.S. emergency department visits, hospitalizations, or deaths each year involve traumatic brain injury. Those of us who, like me, live with a brain health condition are too often denied opportunities to get well. For example, a 2016 Rand study found that only about one third of service members newly diagnosed with post-traumatic stress and less than a quarter of those with depression received minimally appropriate care. And, for individuals that do get standard care, available first-line medications generally fail to restore wellness fully and often add hobbling side effects.

One of the most important ways to address this problem is to improve treatments through research. Despite the recent assault by many in the blogosphere, biomedical treatments continue to form an important platform for stabilizing individuals with severe brain illness, and biomedical research retains strong potential to succeed in developing effective, safe treatments. I understand the frustration so many feel at the slow pace of better medications reaching practice, but thanks to my participation on One Mind's Board, I also understand why this situation is so and what can be done to accelerate it.

The central current roadblock to efficient treatment development is that we do not yet adequately understand the nature of brain diseases, and thus cannot diagnose them accurately enough. This is an obstacle for research because when scientists recruit volunteers with a given diagnosis to participate as clinical trial subjects, these groups do not constitute an accurate sample of a population with the actual disease meant to be treated. For example, some patients diagnosed with depression may display their symptoms primarily due to chronic emotional stress, some primarily due to genetic factors, and so forth–and I would claim that these are different diseases that would respond differently to the same treatment. For translational research to show that new treatments can help people with real conditions, more basic research is necessary to characterize the neurobiology that underlies what we now see as our current diagnosis spectrum in the DSM-V.

Unfortunately, basic research is relatively difficult to sell to the philanthropic public because it does not produce immediate improvements to human life. Equally unfortunately, when neuroscience is done, scientists have traditionally competed for recognition and funding, which tends to prevent them from working together in the open science framework that holds the only way forward for meaningful progress in our time.

Nonetheless, one nonprofit, One Mind, is rallying support to accelerate research, using this open science framework, to better understand, diagnose and treat brain health conditions. In the short five years since my family and Patrick Kennedy launched it, One Mind has developed an online data Portal to enable neuroscientists to easily share their data with one another and to collaborate. Already, still in its beta phase, the Portal has become home to the data of over 100 scientists, who use it together to great synergistic effect: the Portal has served as the analytical hub for the discovery of a better biomarker for diagnosing traumatic brain injury, now in the running for FDA approval. And this discovery has come in the short space of two years since the study's first patient enrolled, thanks to the scale of data sharing the Portal allows.

Thus vetted and tested in action, the One Mind Portal is now ready to take on data from a growing range of neuroscientific sources. The National Network of Depression Centers has just signed an agreement to share data via the Portal, and UCLA's developing 100,000-patient Depression Grand Challenge has agreed to use the Portal as its collaboration hub. The 9-university NAPLS psychosis prevention consortium is in talks to share its data via the Portal, and several of IMHRO's Rising Star Award-winning neuroscientists have expressed interest in joining the Portal community. 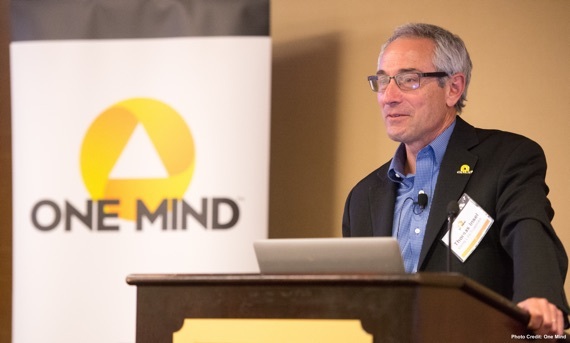 As I heard the leading neuroscientist of Alphabet's life sciences company Verily, Dr. Tom Insel, eloquently summarize about open science, if we don't share data, nobody wins; if we share, we might all win. Working with One Mind and its Portal has been a thrilling ride, and I can't wait to see where the thriving throw-and-catch of ideas enabled by this open, level field of play will take brain science next.

If you work in neuroscience and would like to join the growing Portal community, please contact us at One Mind to learn more.