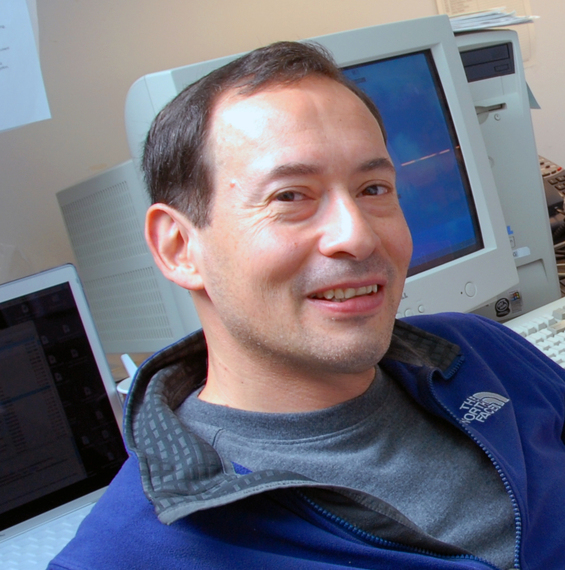 Neuroscientist David Edelman, who's currently on the faculties of the University of San Diego and the University of California, San Diego, and is the son of late Nobel laureate Gerald Edelman, says he agrees that an evolution paradigm shift needs to happen. Like father like son, David Edelman has an interest in "how 3D organismal form comes about." We discuss origin of morphology, and paradigm shift in the interview that follows, as well as Edelman's fascination with the octopus.

David Edelman has been a professor of neuroscience at Bennington College, an associate fellow in experimental neurobiology at The Neurosciences Institute (NSI) and assistant professor of neurobiology at The Scripps Research Institute. His PhD is in paleoanthropology from the University of Pennsylvania and his BA in sociology and anthropology from Swarthmore. His postdoctoral work was done at Scripps and NSI.

He is currently on the advisory board of the Society for Mind Brain Science and has served on the editorial board of Frontiers in Psychology: Theoretical and Philosophical Psychology.

Suzan Mazur: You're continuing along the lines of some of your father's research in neuroscience. I'm sorry you lost your father, Gerald Edelman, last year. What an inspiration he must have been and must continue to be. What was it like growing up in that kind of science environment?

David Edelman: I'd say more normal than you might think. For instance, both of my parents insisted that I learn, and that my siblings learn, a musical instrument. My father was a violinist. My mother played flute and piano. My parents didn't care which instruments we chose, as long as we learned to play an instrument. They were very wise in their insistence because the violin has always been something I could lean on in the absence of anything else in my life.

Music, was, of course, central to my father's life. His professional aspirations as a violinist were interrupted by his mother's insistence that he pursue something with which he could actually make a living. My father steered clear of imposing science on us. He was eager for us to be interested in science, but he wasn't activist about it.

Suzan Mazur: Of course you didn't steer clear of science. From your perspective as a neuroscientist, is there a paradigm shift underway in evolutionary thinking?

David Edelman: I think there should be a shift. . . . The Modern Synthesis was a scientific reckoning -- or coming to terms -- among great thinkers: George Gaylord Simpson, Ernst Mayr, JBS Haldane, Theodosius Dobzhansky, to mention some of the key players. They had noble aspirations, but there was a problem in that a very determinist point of view reigned among geneticists, and genetics was an important part of the argument being made by the neo-Darwinians. They had what they thought was the basis for heritability. They thought that essentially it was all going to be gravy at that point, that they could merge the fields of natural science and genetics, using genetics to explain both heritability of individual traits and the appearance of higher taxa -- new species, families, genera, etc. They were way off base at the time. I don't think they knew just how far off base they were.

One of the problems, and we're still confronting these problems in modern genetics, is that we do not have the ability to discern from a 1D code, which is basically what a given genome is, a 3D organism. We don't yet have any way to explain how 3D organismal form comes about.

One of my father's scientific legacies that remains underappreciated is -- he pointed this out 26, 27 years ago in his book Topobiology -- that just understanding the order and identity of bases, however many there are, was not going to give us the basis for understanding the origin of morphology whether during development or in the course of evolution.

Suzan Mazur: It's interesting that Fermilab is exploring whether we actually live in a 3D world. They think it may be 2D and we're living in a hologram.

David Edelman: There's an intellectual crisis in modern biology. A hyper-determinist streak runs through the thinking, particularly in molecular biology and genetics. Even if researchers can't get directly from DNA code to a 3D organism, they believe essentially that it's simply a coding problem.

It's actually more complex. The problem is that we cannot observe a lot of processes in sufficient detail and at all the necessary levels of interaction -- either during individual development or across evolutionary time. And these processes are messier than we believe. Right now, we can't infer processes in a systematic way regarding the relevant levels of morphological change. We don't have the capacity to do that yet.

Suzan Mazur: What would you say about the following driving biological evolution toward increasing complexity?: (1) adhesive interactions among cells, which your father was studying, (2) infection of cellular organisms by viruses, bacteria or fungi plus symbiosis, (3) the constructal law of flow systems--

David Edelman: It's a combination.

The real problem is that what we're after is a moving target.

One of the unfortunate aspects of Western science is that it's hyper-reductionist. There's nothing wrong with that to a certain extent. You can certainly pull things apart to study them and look at the constituent elements; at a certain level of organization they look like a highly mechanical system and to some extent you can discern from your dissections what each element does. When you look at certain molecular biological problems, for example, that's what you see. But the critical issue is that we're talking about much larger systems, systems nested within other systems. It's the interactions across those different levels of organization that need to also be considered.

Suzan Mazur: That's one of the reasons why your father went on from CAMs (cell adhesion molecules) to neuroscience?

Suzan Mazur: There's now a growing interest in viruses and viroids. Scientists report that roughly 10% of the human genome is inhabited by viruses, and a viroid-like entity is considered a "very good candidate" for the first replicon on Earth.

František Baluška, a European plant physiologist has described cell-cell adhesion that happens as viruses enter cell membranes of other organisms and start manipulating their protein receptors on the way deeper into the cell to make copies. Here's what Baluška thinks:

"Infection, especially the viral one, but also bacterial and fungal infections, followed by symbiosis, is proposed to act as the major force that drives biological evolution toward higher complexity."

He says, "Without infection no evolution."

What are your thoughts about the virosphere?

David Edelman: I don't bristle at this. I embrace any new ideas; it's important for science to be creative. But I'm always circumspect when a concept comes along and claims are made that it is THE motive force.

My own scientific career, which is very checkered -- I trained as a human paleontologist, I did a postdoc in gene transcriptional regulation, and then I moved on to cellular neurobiology and eventually to problems of higher brain functions -- specifically the evolutionary origins of consciousness and its nature in non-human animals. What I'm saying here is that a lot of things have exerted influence on the trajectory of life.

I also think it's in the nature of trained Western scientists to look for a big breakthrough answer. We scientists tend to admire the mechanistic reduction of classical physics. What my dad used to call a case of "physics envy." We'd love the biological world to cooperate in the same way that the atom and everything else scaled up to the atom behaved prior to Einstein, prior to 20th century physics. For the world to be reducible in a very mechanistic way. I am leery of this conception because biology defies it at every turn.

Suzan Mazur: Are you looking at signaling?

David Edelman: I've been particularly interested in the visual system of the octopus, this beautifully convergent visual system relative to that of the vertebrates. The octopus eye has a focusing lens. It has six or seven ocular muscles. The octopus has incredible distance vision as invertebrates go. It's seldom that you come across an invertebrate that can actually look you in the eye and even track you with its eyes. We don't see that in insects (arthropods such as spiders are a different story). The eye in the octopus is a perfect entrée to the notion of a sophisticated suite of neural function and behaviors that in many ways seem to converge in nature and complexity on those of vertebrates.

If you look at the neurons of an octopus, they don't strike you as very unusual. You see similar-looking nerve cells in much more primitive mollusks, such as mussels and clams. But if you look at the density of their brain nuclei and you look at their sensory and motor adaptations -- their eyes, their tactile sense, the way they connect with the world -- it's an amazing degree of complexity, especially for an invertebrate.

Suzan Mazur: What are your thoughts about epigenetics?

Suzan Mazur: Do you define epigenetics as development or as acquired traits?

David Edelman: Both. DNA methylation suggests a somatic mechanism for heritability, which is somewhat far afield of neo-Darwinism.

David Edelman: It's a ripe area for further exploration. There are years to go before we have an inkling about what's actually going on. What we have found, as you say, is pretty constrained. It's very suggestive.