A new thriller starring Ben Kingsley and Ryan Reynolds explores the idea of transferring consciousness from one body to another. Unlike Freaky Friday, or the myriad of other family movies and comedies that have explored the idea, this one actually explores the science of the process.

In the movie Self/less, a rich business man (Kingsley) is dying of cancer. However, he is able to prolong his "self" by transferring his consciousness from one body to another using a medical procedure called "shedding."

You may be wondering how such a far-out concept can actually have any science to it. I wondered the same thing, so I asked a neuroscientist what he thought.

I spoke with Dr. Charles Higgins, one of the movie's scientific consultants, and an associate professor of neuroscience and electrical engineering at the University of Arizona. He has a particularly interesting perspective on this topic, because he has been interfacing insect brains with robots. I started the interview by asking him more about this work. 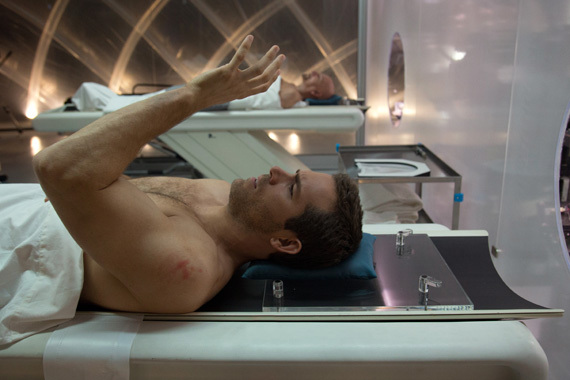 Alejandro Rojas: In what ways do you integrate insect brains with robots?

Computers are really good at crunching numbers and making quick calculations. Brains are really good at visual recognition and auditory recognition. If you could get the best of both worlds that would be awesome, and the best way to do that would be to genetically engineer something. I wasn't able to do that, so I just took a living insect and interfaced it with a robot.

Rojas: You have been able to develop robots that are guided by insect brains, correct?

Higgins: We have done a couple of forays into that area. In one we took a moth and tapped into its visual system and used that to control the robot, so what the living moth saw steered the robot. But the moth didn't have any choice in the matter. We tapped into its nervous system where it couldn't help but respond.

Rojas: When trying to understand the brain in the way we understand computers, do you think consciousness might just be data?

Higgins: I sort of agree and sort of disagree with what you said. I fundamentally believe that the consciousness - thought, the self, all of that - is a phenomenon that results in the interaction of neurons and hormones and cells through the brain and all through the body, and there is nothing more to it than that. It is a biological machine.

That is a philosophical position. Nothing can prove it. Although, we have really good evidence that is true. For example, with people who have had brain injuries you can see personality changes. So, it doesn't seem as if there is a soul, which is that person inhabiting the body. When your [body] is broken down, you are still the same person, but when there is damage to the brain, it seems to make a different person.

That means, in principle, whatever you want to call it, the self, your consciousness, knowledge and information, your experience, is all stored in a pattern of interconnections in the brain and so you could potentially read it out and store it someplace. So, it might be information in some form. Although, we don't understand how it is organized or at what level we would need to read it out.

Rojas: If we could understand that, do you believe that data could be transferred, like in the movie, from one brain to another?

Higgins: Fundamentally, yes. I mean, it is a huge technological leap, like a person from 100 years ago talking about an iPhone, but yeah. It is not impossible, because I think one day we will understand it.

What we are really talking about in this movie is immortality. Now that we have technology, we think: "How can technology make my life better?" "How can I live longer?"

It is very frustrating to me that someone with Alzheimer's disease, there self just erodes away, and we can't fix it. That is going to change. Not only the US government, but tons of governments are pouring tons of money into that. In the folds of time we will understand that disease. We will understand more about the brain, and when someone has a stroke, or is losing function, maybe we will be able to make a prosthetic for some portion of the brain. That will happen. We will keep pursuing it until we get it.

Rojas: My last question is, how much does science-fiction influence you and/or help your work?

Higgins: Actually, I think it is a huge influence. With people in my generation it started with Star Trek. That has inspired me from the beginning. I am holding Captain Kirk's communicator in my hand. We have gotten that far. But Gene Rodenberry's other imaginative things from 1965 and 1966, like the transporter, we are still working on that one. One of them was a reasoning computer, by the way. There was implications in the series that it had biological components and non-biological components.

So, I mean, scientists are still working on things from science-fiction from the 60s. And of course, this new movie has a device in it that we would all love to have. Who wouldn't love to transfer into Ryan Reynolds' body when you are 80 and start over again?

To read this interview in its entirety, visit AlejandroTRojas.com.