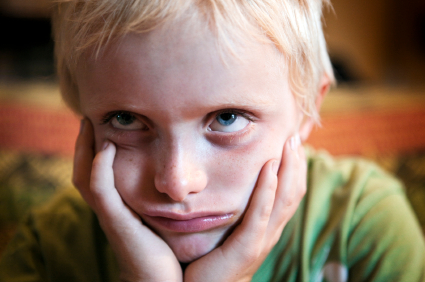 My friend Sally used to corral her three teenage children to clean their house every Saturday morning. I was envious of her chutzpa to demand this of her kids, but the part of the story that was always tragic to me was that every Saturday afternoon without fail, Sally's son Sam was sent to his room for hyperactive, "out of control" behavior.

Looking at the cause and effect of the son's behavior through my lens of awareness of how neurotoxic many cleaning chemicals are, I could see it would make sense that the son's central nervous system and brain could be reacting to these chemicals. Symptoms of neurotoxicity include lack of concentration, personality changes, depression, hyperactivity and the mimicking of psychiatric disorders.

Not being particularly "green," the cleaning products Sally would buy for her kids to use were the standard store-bought fare readily available in supermarkets. Examples of neurotoxins found in such products include VOCs (furniture polish can contain VOCs), neurotoxic disinfectants, petroleum distillates, fragrances (scented products are notoriously neurotoxic,) and waxes (VOCs again in the solvents), to name a few.

Pesticides take front seat in the arsenal of poisons that hurt the central nervous system and brain. After all, they are designed to kill. A new study reported in the June issue of Pediatrics, published online May 17, links organophosphate pesticide metabolites found in urine to a much higher incidence of Attention Deficit Hyperactivity Disorder (ADHD).

"Each 10-fold increase in urinary concentration of organophosphate metabolites was associated with a 55 percent to 72 percent increase in the odds of ADHD," study author Maryse F. Bouchard, PhD, of the Department of Environmental and Occupational Health, University of Montreal, told Medscape Psychiatry.

Another example of subtle neurotoxic exposure children suffer through that most adults miss is to the solvents in markers in art class. When my daughter was in school, one year the math class was the period after art class, and she said that the kids were always "off the walls" in math class. What a tragedy, and one that could so easily be avoided if schools stopped allowing neurotoxic art materials to be used. How many kids thought they were bad at math when the culprit was the colored markers?

I've often wondered why the dots haven't been connected by most people between neurotoxic chemicals and ADHD-type behavior. After all, if a neurotoxic chemical is known to cause depression, for example, and that chemical is being used, why do so few people (and almost no psychiatrists) say, oh my gosh, let's remove the neurotoxin?

At least one thing parents can do is to remove neurotoxins from the home. Here are eleven quick solutions:

Yes to "green" dry cleaning using C02, no to dry cleaning with perchlorethelene (and hanging clothes in bedroom closets);

Yes to organic produce, no to highly processed foods.

Yes to safe integrated pest management, no to synthetic pesticides;

Yes to cedar and herbs for moths, no to moth balls;

Yes to natural essential oils for fragrance, no to synthetic perfumes and fragrances;

Yes to efficient heating systems, no to kerosene, open gas, or other systems that could leak carbon monoxide;

Yes to educating yourself about lead paint and other sources of lead, no to hoping for the best if you live in a house built before 1978.

Simple steps such as these can make a big difference. Being away from neurotoxins helps you have more serene sleep, babies are less fussy, children concentration is improved, people are calmer and the lifestyle helps you have a better sense of well-being.

More:
healthy livingHealth neurotoxinattention-deficit-disorderADHD
Newsletter Sign Up
The essential guide to taking care of your mind and body
Subscribe to HuffPost’s wellness email
Successfully Subscribed!
Wellness delivered to your inbox