Though they've been looking for over a year, scientists have found no trace of an elusive interaction among elementary particles called neutrinos.

The interaction, in which neutrinos would collide and annihilate one another, would prove that the mysterious particles act as their own antimatter partners, said Manfred Lindner, director of the Max Planck Institute for Nuclear Physics in Germany.

Antimatter particles are subatomic particles that typically have opposite properties of normal matter. For instance, the antimatter partner of the electron is a positively charged particle called the positron.

But a new analysis of more than a year's worth of data puts limits on how frequently this elusive behavior can occur. It also suggested that clues of this interaction found in an earlier experiment were probably just due to background radiation.

If the interaction doesn't occur, scientists will have to tweak the reigning theory of physics, the Standard Model, which attempts to explain how the tiny particles that make up matter behave. [6 Implications of Finding a Higgs Boson]

Neutrinos are among the most abundant particles in the universe, and billions of them travel through every square inch of the human body every second, at nearly the speed of light. Yet, because these mysterious particles interact so weakly with other particles, they are extremely hard to detect. 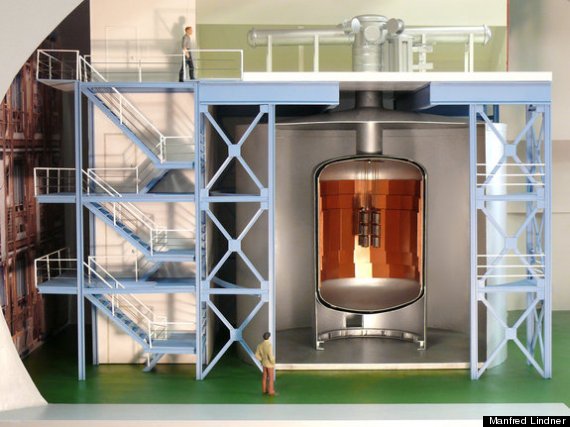 Germanium detectors were shielded from cosmic radiation inside pure liquid argon tanks within water tanks that were buried nearly a mile underground at Gran Sasso National Laboratory. The goal of creating this radiation-free environment is to detect the extremely rare event of neutrinos annihilating with each other.

In the 1930s, Italian physicist Ettore Majorana proposed that neutrinos could act as their own antiparticles. If that's true, then scientists expect to see an ultrarare event known as neutrinoless double beta decay, in which two neutrons inside the atomic nucleus decay into two protons, two electrons and two neutrinos, which then smash into and annihilate one another.

The top candidate for spotting this elusive interaction is germanium-76, an isotope of the atom germanium with a different atomic weight from the usual variety. But a germanium-76 nucleus only decays extremely rarely — meaning the signal the scientists are hunting for is a billion times smaller than those from cosmic rays bombarding the Earth and other ordinary sources of radiation.

Physicists needed to completely shield the germanium from any hint of cosmic radiation — and they needed a lot of germanium, in order to ensure they could capture at least a few double-beta-decay events.

Toward that end, Lindner and his colleagues created about 46 lbs. (21 kilograms) of germanium detectors that can both cause beta decay and emit a tiny electric pulse when it occurs.

They then buried those detectors nearly a mile (1.4 kilometers) below the surface of the Earth at Gran Sasso National Laboratory in Italy, where only the tiniest fraction of cosmic rays can penetrate the ground. But the team needed to shield the detectors even more, so they stored the sensitive detectors in tanks full of extremely pure liquid argon, which was then surrounded by water tanks.

In terms of radiation, "it's the cleanest place in the universe," Lindner told LiveScience.

In the year-plus that the experiment has been running, the scientists haven't seen any evidence for double beta decay. The new analysis, however, reveals that germanium-76 has a half-life of at least 21 trillion trillion years. (The half-life is the time it takes for about half of the material to radioactively decay.)

As a result, the new analysis suggests the earlier experimental results couldn't have come from beta decay.

If neutrinos really act as their own antimatter partners, then that should show up in the experiment in the next several years.

"If you don't see something in five years, we'd say, 'That's it,'" Lindner said.