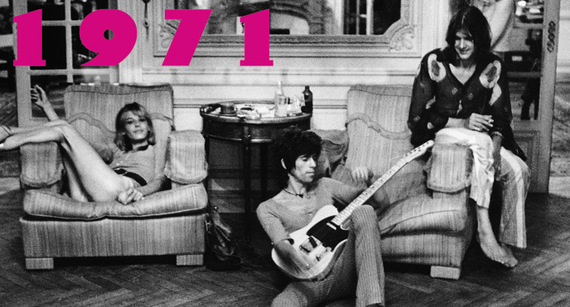 
On New Year's Eve 1970, Paul McCartney instructed his lawyers to issue a writ at the High Court in London to wind up the Beatles.

The sixties ended that day, which was a year late, strictly speaking. You might say this was the last day of the pop era.

The following day, which was a Friday, was 1971. You might say this was the first day of the rock era.

That year, 1971, would also turn out to be the busiest, most creative, most innovative, most interesting, and longest-resounding year of that era.

Nobody dreamed the rock era would last as long as it has done. In those days nobody expected any form of entertainment to last. Least of all rock music. In fact, people joined rock bands to get away from things that lasted. Many of those people who first achieved stardom in 1971--David Bowie, Rod Stewart, Pink Floyd, Led Zeppelin, Elton John, and Joni Mitchell—have since gone on to enjoy careers longer than their contemporaries who became novelists, politicians, captains of industry, and actors, let alone their old friends who remained at school when they hit the road with a guitar over their shoulder.

Similarly, nobody imagined 1971 would see the release of more influential albums than any year before or since. That influence hasn't been felt merely by later generations of musicians, most of whom weren't born in 1971. It's also been felt by the performers themselves. Many of them are still around and more popular than ever. They're still reaping massive rewards from the rock industry that began in 1971. They wish they could still write songs that are as good, make records that are as strong, and express themselves as unself-consciously as they did in 1971.

Many of them were twenty-five at the time, the age that nobody appreciates being. You never get to be twenty-five again. For those of us who were listening, it never got any better than 1971. During those twelve months, in a surge of creativity, playfulness, ambition, technological breakthrough, ego, and blissful ignorance, a huge proportion of the most memorable albums ever made were released.


I was born in 1950. For a music fan, that's the winning ticket in the lottery of life.

I grew up therefore in the '60s. At the time, we didn't know these were going to become the Sixties and follow us around forever.

I was thirteen on that Friday when JFK was shot. I felt a bat squeak of patriotism a few months later when the Beatles conquered America. I was fifteen when Bobby Gregg's snare shot announced Bob Dylan's "Like a Rolling Stone." Bruce Springsteen, who was just six months older, heard it while he was in the car with his mother. He later described it as "somebody kicking open the door to your mind."

I came of age in 1971, the same year rock did. I was at college in London and spending what little spare cash I had on records. Like many similarly inclined young men—and we were mainly men—all my consumer appetites were channeled through the record shop. Jerry Seinfeld says that for the first ten years of his life the only clear thought in his mind was "get candy." We were like that with records.

All the cash that came my way—the forty pounds I had each term for anything more than board, food, and tuition, the pay I got for vacation jobs, birthday gifts from distant relatives, record tokens, obviously—was instantly converted into albums. There was simply nothing else I wanted to spend money on. I spent every idle moment hanging around record shops, being in the presence of, learning the names of, combing the covers of, and sometimes even listening to those things I wanted that I could not have. It was a life spent in pursuit of gratification endlessly deferred.

At the time, 1971 didn't feel like a particularly exceptional year. Nobody talked about the Year in Rock back then. Nobody tried to take the temperature of the business. Nobody pontificated about where things were going or had been. The habit of looking back, which is now so much a part of the music media game, and of which this book is a part, hadn't been invented. It's only in retrospect, and only quite recently at that, since the great digital Niagara of music has made it possible to have all fifty years of recorded rock and roll at our fingertips, to shuffle it, sort it, and subject it to endless listification, that I've come to realize just what an exceptional year my twenty-first year was.

At this point, you raise a skeptical eyebrow and say that for you too the music of the year when you were twenty-one, or eighteen or sixteen or whenever you felt most alive, still speaks to you in a way that no other year does. That's natural. That's just growing up. We all have precious memories of one soft infested summer when we were young. For us too the soundtrack thereof will always be rock's annus mirabilis.

There's an important difference in the case of me and 1971.

The difference is this. I'm right.

This book is a journey through the past to discover what happened that year, in what order, why it did, how the changes on the surface were responding to huge seismic changes underground, how it shaped and was shaped by a few hundred people who were in their midtwenties at the time, and why the music of 1971 still rings so clearly almost fifty years later. It's also to a certain extent about the world out of which that music emerged. It's a book about sex, drugs, hair, hot pants, taxes, technology, class, race, gender, and foolishness as well as Grammy Awards, platinum albums, and reviews in Rolling Stone.

On our journey we shall shatter the cliché that the early '70s were a mere lull before the punk rock storm, rather than the most febrile and creative time in the entire history of popular music; puncture the pious pretense that the words "new" and "exciting" are always interchangeable; wonder at the working practices that brought forth this many masterpieces; reconstruct the real world background against which all this invention took place; look at the lives of the artists who shaped it and in turn were shaped by it. At the end of each chapter I've included a list of records—singles and albums—associated with that month. Some were hits at the time, others were beginning their long march to classic status by being unveiled onstage that month, and a few are there because they deserve to be heard, particularly now that even the previously obscure gems of 1971 are just a click away.

There are moments in all creative stories where the right sort of talent meets the right amount of opportunity with just enough money and technology (but not too much) and then lays it before an audience that is in the ideal state of readiness to ensure that things will happen in a way they have never happened before and will never ever happen again. The year 1971 was one of those moments.


Copyright © 2016 by David Hepworth. Excerpted from Never A Dull Moment 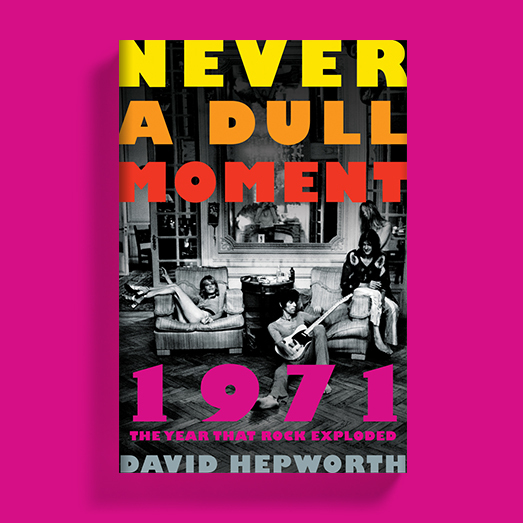 David Hepworth is a music journalist, writer, and publishing industry analyst who has launched several successful British magazines. He presented the definitive BBC rock music program Whistle Test and anchored the coverage of Live Aid in '85. He has won Editor and Writer of the Year awards from the Professional Publishers Association and the Mark Boxer Award from the British Society of Magazine Editors. He is the radio columnist for the Guardian and a media correspondent for the newspaper.