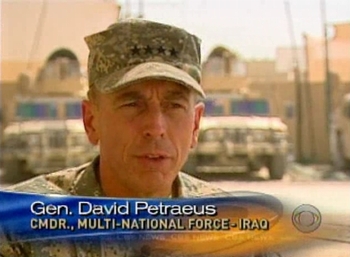 General David Petraeus is big news right now, the guy responsible for reporting on the progress of the surge — or, as some cynics might say, the guy responsible for selling the surge to Congress when he delivers his report next week. After greeting Bush in Iraq on Monday (and offering plenty of face time to the nets, including walkabouts with Katie Couric and Martha Raddatz), Petraeus is now back in D.C., readying to face Congress — and the critics. And "face" is a good word here — Petraeus has become the face of the surge, the man whose credibility has been built up as a patriot and non-partisan, who will deliver the straight, unvarnished truth. He's a four-star general, dammit, and if he says the surge is working, well, it's working.

There are some, though, that claim to see through the varnish — the most prominent of which is Paul Krugman, who joined a chorus of bloggers and writers in uncovering an op-ed by Petraeus in the Washington Post, dating from September 26, 2004. Said Krugman:

General Petraeus's history also suggests that he is much more of a political, and indeed partisan, animal than his press would have you believe. In particular, six weeks before the 2004 presidential election, General Petraeus published an op-ed article in The Washington Post in which he claimed -- wrongly, of course -- that there had been "tangible progress" in Iraq, and that "momentum has gathered in recent months."

Is it normal for serving military officers to publish articles just before an election that clearly help an incumbent's campaign? I don't think so.

Here's more from that earlier Petraeus report, circa 2004:

Helping organize, train and equip nearly a quarter-million of Iraq's security forces is a daunting task. Doing so in the middle of a tough insurgency increases the challenge enormously, making the mission akin to repairing an aircraft while in flight -- and while being shot at. Now, however, 18 months after entering Iraq, I see tangible progress. Iraqi security elements are being rebuilt from the ground up.

The institutions that oversee them are being reestablished from the top down. And Iraqi leaders are stepping forward....there has been progress in the effort to enable Iraqis to shoulder more of the load for their own security, something they are keen to do.

It's late in the game for skepticism, but Krugman has raised two valid points: (1) Petraeus, whose assertions are being so eagerly awaited, has been wildly wrong before; and (2) The publication of that op-ed so close to an election is suggestive of a political/partisan interest. I would add a third, echoing Gary Hart here on HuffPo: (3) The credibility of the report is affected when the reporter has a stake in the outcome.

None of these is enough to damn the Petraeus report on its own, not by a long shot. There are four stars on his shoulder that didn't get there by being on the sidelines. He is credited with rebuilding Mosul and surrounds in norther Iraq, getting it under control and functioning, and providing a blueprint for counterinsurgency methods that went into the military's counterinsurgency manual...which he co-wrote. And though he was dismally wrong on the Iraqi army, it may be unfair to blame him for their failure to "stand up" (one veteran of the region called them "un-trainable" and traced the challenges of rebuilding the Iraqi army to the fact that it had been, oh, disbanded following the invasion. More on THAT today from Bremer.)

And, well, there actually have been measurable results from the surge, in the form of lower raw numbers of attacks and greater (though still severely limited) security in towns with army outposts, where smaller pockets of territory are being secured. But, for example, Katie Couric's stroll through a bustling market had to be taken wearing an armored vest in the company of a throng of soldiers. And lower attack numbers don't necessarily mean progress: As CNN's Michael Ware has pointed out., there's the U.S.-Sunni alliance to factor in, and the lower attack figures could also be attributable to the mass exodus of refugees, or, more scarily, because certain regions have been so successfully ethnically cleansed that insurgents have run out of people to kill. All of the above are factors to be taken into account when evaluating what Petraeus delivers on September 15th.

And then, of course, there is his credibility — because that is what's going to sell his report. So, back to our numbered points above. The first is about his judgment: Petraeus was wrong before (i.e. Sept. 2004), so why wouldn't he be wrong now? It's even more of a fair question considering that Petraeus is known for jumping ahead to the long-term by asking "How does it end?" That he so badly predicted the outcome in 2004 does not bode well for his ability to correctly divine progress and pitfall in 2007. And whatever progress he reports, he's already the general who cried wolf.

Next there is the partisan question. Krugman asked, "Is it normal for serving military officers to publish articles just before an election that clearly help an incumbent's campaign? I don't think so." Well, this is trickier. I asked someone working in a national security think tank at the time, who said that while the military should be reporting to civilian leadership and the public on how a military operation is going, including before an election, the Petraeus editorial was "a remarkable thing." In the most recent issue of Foreign Affairs, Lawrence Korb agrees, saying that Petraeus "improperly" injected himself into a political compaign. Petraeus is not exactly known as an apolitical person — he's got a PhD from Princeton's Woodrow Wilson School of Public Policy, and a reputation for being an ambitious and skillful political operator. Says my think-tank source: "They say the first star is for military ability, the second star is political, and moreso from there"; having never myself donned body armor and charged headlong into battle, I will assume that there is probably more to four stars than that. But put it this way: The notion that Petraeus' 2004 editorial had a partison bent is not exactly new, and has not exactly been ruled out.

So now it's 2007, and he's about to deliver a report, to the guy who appointed him, about how Iraq has fared under his watch so far. Enter point number 3: He's bound to be a little less than objective about how well he's done the job so far. In related news, this is the best blog post ever written.

Updshot: General Petraeus is a helluva lot more qualified to lead the surge, evaluate the surge, and report on the surge than the media, that's for sure. But it is the media's job to also evaluate General Petraeus himself as the source of that report — not just his qualifications, but his credibility. Krugman is right to be skeptical — as it would have been right to be skeptical in the fall of 2004. In the fall of 2007, a little skepticism couldn't hurt. A lack of skepticism, on the other hand... well. We all know what else happened in the fall of 2004.