For me, this is easy to see, but hard to say. My partner and I were born and raised there, and we have ties of family, friends and community in Louisiana that run deep and proud. The many gays and lesbians I know who manage to thrive there are like colonists, building successful, open lives in an inhospitable environment, and making a community from those friends and loved ones who treasure them. 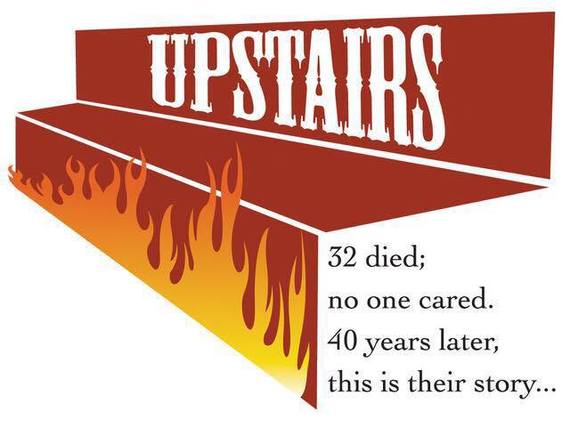 But the state as a whole consistently elects politicians who campaign on the promise of making life harder for gays and lesbians, then deliver on that promise. Anti-discrimination in state hiring was stripped from the law by Bobby Jindal in 2008. His legislature refused to pass a measure striking down the state's unconstitutional law against sodomy. Statewide, LGBT people can still be fired from their jobs, kicked out of stores and refused even emergency services at the whim of any receptionist or clerk. Only the cities of New Orleans, Shreveport, and Baton Rouge (and the "county" of Jefferson Parish) offer protection from a prevailing political climate of indifference or hostility. From that standpoint, it's hard to argue that, as a matter of policy, Louisiana prefers that I keep my faggot ass in California.

So maybe I was a little surprised when I was asked to bring Upstairs: the Musical, to Lafayette.

Upstairs: the Musical is a tragic myth that dramatizes night of the real-life arson fire at the Upstairs Lounge in New Orleans, La. -- the deadliest crime against LGBT people in U.S. History. Two years ago, when it premiered in New Orleans, the play enjoyed good reviews and an extended run.

But would it play in Lafayette?

Sitting 138 miles west of decadent, cosmopolitan New Orleans on I-10, in the deeply catholic heart of Cajun Country, Lafayette has always been an unusual case for LGBT people. It's a fun town, graced with a lively college scene and brimming with the food and music that have made its folk culture world famous. During the cultural revolution of the late '60s, it naturally became a place of refuge for the gays and lesbians of the region who hadn't the time, money, or desire to get to New Orleans. But the gay community there has always existed in that awkward nexus between the live-and-let-live heritage of its Acadian settlers and their devout Catholic faith. Gays could have their fun -- why not? -- but not their visibility as equals. First Gay club? 1968. First Gay Pride? 2014.

Thematically, Upstairs, with its own Catholic overtones, raises controversial questions about silence and visibility, crime and punishment, and religion and redemption. One reviewer in New Orleans even claimed that it "mocks religion" (it doesn't), and asks the audience to forgive the arsonist (isn't that what religion asks?). How will it be received in the joyful but devout crown jewel of Acadiana?

Co-Director Martin Smith takes the potential for controversy in stride as part of life for his theatre troupe, the Riveters, who comprise most of the show's cast.

"There's a risk in every show that we produce," said Smith. "We never know how the community is going to react. Our goal is to produce uncommon shows and surprise our audience. You never really know what to expect, and that's the beauty of theatre."

Since its founding in 2011, the group has pushed buttons locally with such productions as HAIR and Fat Pig, often with provocative staging that doesn't back away from controversy. But, though the group has many LGBT members, it has never done a primarily LGBT themed show.

So why start with Upstairs?

"It's a story that needs to be heard and seen," Smith said. "Surprisingly, a lot of people do not know about the fire and we want to educate them. And the music is totally amazing! After we started researching the fire, I could not believe some of the things I read. The world we live in now is totally different, but there are still people out there who are so hateful."

Times are rapidly changing, and Lafayette has, perhaps improbably, emerged at the forefront of that change. It's a dynamic, fast-growing city, with a long and impressive list of recent awards naming it one of the best college towns, one of the best manufacturing towns, and even the happiest town of its size in the nation. Ted Richard of Acadiana Pride says the city has been nothing but supportive about the festival and the possibilities it offers for cultural enrichment and tourism.

Bobby Jindal's Louisiana doesn't want gays in it. But Louisiana isn't Bobby Jindal's. Its history and heritage belong as much to Lafayette as to Baton Rouge, and as much to men and women like Richard, Martin and the Riveters as to anyone, purchased with blood and ashes in a long and complex history of violence and struggle in the state.

After the Upstairs Lounge fire, politicians at the state level tried to ignore the disaster and make it disappear. And, for awhile, it worked, adding a strange and tragic layer of obscurity to an event that was already unbearably sad. But, with productions like Upstairs, an award-winning new history of the fire, and several documentaries, that obscurity is ending.

And, eventually, even Louisiana politicians will figure out that the story of LGBT people in Louisiana is like the story of the Upstairs Lounge, itself: uncomfortable, suppressed for too long, but always there, ready to be heard, and never going away.