I would like to tell you about a theory I've developed, in the past two years or so, about a certain brand of people I like to call "lighthouses." This theory was developed after years spent in the company of one such member of the species, carefully observed in her natural habitat. She was the prototype, basically. Her name is Rylee and she's my best friend. You might as well know that now because she's going to come up a lot.

Rylee, since the time I met her seven years ago, has dated nine people. This is probably not remarkably high. It could even be average. What do I know? It could be that that number only seems large in comparison to my own figures, which are so low they're practically negative. But what's really crazy, what's really impressive about it, is her lack of time off between boyfriends. When she's single, Rylee hardly needs to leave the apartment (or, in some of those cases, dormitory building) before anywhere from one to four different guys profess an interest in being her next boyfriend. There is a constant stream there. She'll make her interests known, of course, but she always has options. She could sit down on the floor, be still, and wait, and I honestly believe that somebody would show up, sooner or later, to ask her out.

This is what I like to call being "a lighthouse."

Lighthouse people are beacons that call all the sailors in ships back to land, beckoning them in toward the light. Lighthouse people are magnetic and luminescent, so much so that even when one sailor manages to row all the way to land and climbs up into the lighthouse, the rest of the sailors will stay out there on the water, waiting for their chance to come to shore. They will feel that it's always best to keep an eye on the lighthouse, even if they have to come and go due to other sailorly obligations. The lighthouse might act like it doesn't know it's so popular with the sailors, but it does. How could it not? Even if the lighthouse has a special sailor for the moment, its light is always on. It can't help it.

Now, I've had it pointed out to me (by a bunch of boys who couldn't possibly understand the metaphor) that this is not how lighthouses actually "work." These jerks tried to tell me that lighthouses are actually there to keep sailors away from particularly dangerous shorelines, because otherwise they'd crash into the jagged rocks found there. I mean, fine. If you want to get technical about certain structures' designated functions, then yes, that is correct, even though I think that's dumb because people and creatures are drawn toward light and if lighthouses really wanted to keep people away from rocky shores they'd be big audio speakers that played scary ghost sounds. But I still think I'm right, in the metaphorical sense. And the lighthouses of my world are big, sexy, maneaters. They don't even try to be that way. They just are.

I am not a lighthouse.

The first time I told Rylee that she was a lighthouse, she asked me what that made me. (Lighthouses generally recognize those that are -- and aren't -- fellow lighthouses.) I thought about it for a minute. I said: "The Bermuda Triangle."

I know that sounds like an exaggeration. And sure, to some extent, it probably is. For instance, there isn't anything about me that is analogous to the Bermuda Triangle's "rogue wave" phenomenon (at least I hope there isn't). I don't capsize sailors, much less entire ships. I keep myself to myself, you know? In fact, I think that's probably what the Bermuda Triangle is up to. It doesn't mean to do any harm, and it's actually pretty nice once you get to know it. It's just that Bermuda doesn't know how to handle itself when somebody sails into its territory, because that hardly ever happens. It hasn't had much chance to practice, and it's used to things going a certain way. So if a sailor DOES come around, it gets a little nervous, freaks the fuck out, and creates hurricane-like devastation in every direction around it. And then it gets embarrassed and sad and calls its friends.

I do not present this theory because I feel sorry for myself. It's just the way things are. Not all of us can be born lighthouses, or nobody would ever get anything done and there would be more sex happening than you could even believe. I just think it's important that I make my Triangular nature clear up front.

My name is Katie Heaney, and I'm a Bermuda Triangle.

As a result, and possibly as a result of other factors like "luck" and "being interested in people who are unavailable and/or terrible for me," I've been single for my entire life. And I don't mean that I haven't had any major long-term relationships, or that I haven't dated anyone in a really long time, or that I've only dated people for a few months at a time. I mean that I have been wholly and totally single for my entire life. Not one boyfriend. Not one short-term dating situation. Not one person with whom I regularly hung out and kissed on the face. To be honest I don't even know that I could fairly say that I've been on more than one real date. There were a couple of times when I hung out with a boy I liked and he paid for me and we were both single so I think those were dates, but then like a week later he had a girlfriend that wasn't me and I was cursing his very existence, so it's hard to say for sure. But more on that later.

People have interesting reactions when you tell them you've never had a boyfriend and you're over the age of 21. Most girls are pretty good at acting like they aren't shocked, because most of them have at least one friend who doesn't date as much as the others for whom they've learned to be uncondescendingly empathetic. When I'm having one of my "something is seriously wrong with me for being alone" phases (which are, thankfully, relatively infrequent), my friends have learned to conjure up relatives/mythical acquaintances/"Grey's Anatomy" characters who have gone even longer than I have without having a boyfriend, so it's totally not weird at all that I haven't had one yet. Practically everybody, except for every last person they can think of at the moment, has been single for as long as I have. My darling, patient friends tell me that I'm still single only because I'm picky, and because I haven't met the right person yet. This would feel truer if I hadn't been shut down by quite so many wrong people that I, despite my allegedly high standards, chased after. In any case, it's a nice thought.

Sometimes it feels like this is something I should be worried about. Sometimes, during a couple days every month in particular, I want to spend some time lying on the floor and feeling like there must be something terribly wrong with me. I am at the point in my life where I no longer know another person in my shoes. I could count on my friend Colleen for a long time, but then she had to go and get a pseudo-boyfriend last year. I couldn't believe that. It was almost like she wasn't thinking about how her relationship would affect me.

Most of the time it does not upset me to think about my sad, old, decrepit spinster body. Obviously there are about one trillion things that could be worse about my life. Not having a boyfriend at any given moment bothers me very little. Not having ever had one bothers me only slightly more, only because I want to know that I'll get to fall in love at least once, for real. Not in the way I'm used to, which involves one-sided daydreaming prolonged over embarrassing lengths of time, projected onto boys and men (and Boyz II Men) who either don't know me at all, or who know me but don't exactly like-like me. I'm getting too old for that. At least that's what I keep trying to tell myself, right after the latest episode of me acting like some extra-tall preteen with a Justin Bieber problem has passed.

It makes me feel good to know, though, that I am not alone in every way. Even if I'm the only permanently single person in my group of friends, or the entire world basically, I'm not the only one to have made a royal mess of my love life. (Can you make a mess out of something that doesn't exist? Yes, actually!) My absolute favorite thing to do is sit around a room with my friends and some wine and remind each other of our worst-ever dating stories. We all screw up. We all keep company with weirdos and assholes. We have all taken too long to realize that something that wasn't even good for us in the first place has ended.

Excerpted from the book NEVER HAVE I EVER: My Life (So Far) Without a Date by Katie Heaney. Copyright © 2014 by Katie Heaney. Reprinted by permission of Grand Central Publishing. All rights reserved. 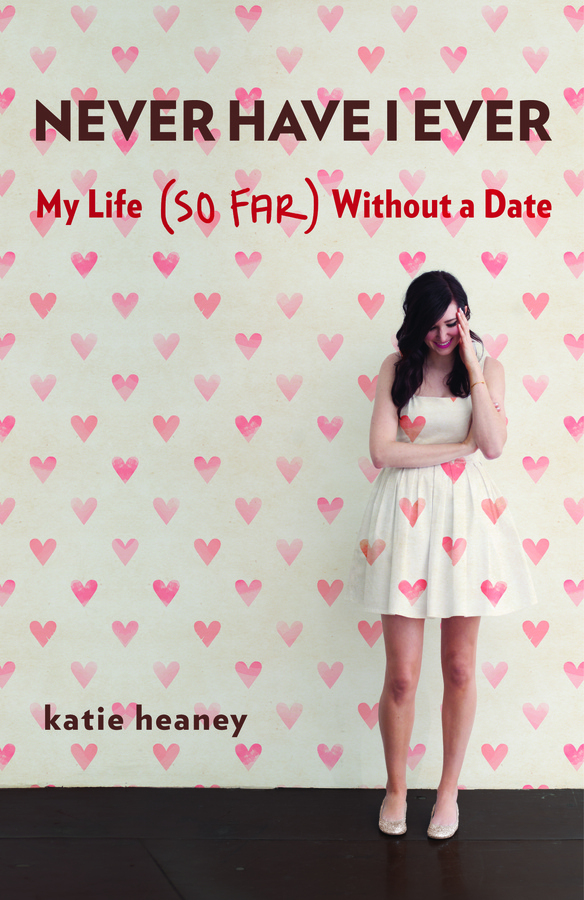