My first conversation with a black man didn't come until the age of 19. His name was Terry. I was a sophomore at Mizzou and the leader of a Christian singing group sponsored by the Baptist Student Union called "Evidence." I don't remember if we recruited him or if he found us. All I knew is that the man could throw down a tune and that he had a gift.

Prior to knowing Terry, I had only seen black people on television or when my high school basketball team played a nearby school. All of the roughly 160 classmates in my graduating class of 1997 were white. Even today, when you visit my hometown of Dexter, Missouri -- just a few miles from the border that separated the North and South in 1861 -- you likely won't see a man or woman of color unless it's at a gas station on the outskirts of town. I have never understood why or had the courage to bring it up, but I'm desperate for answers. 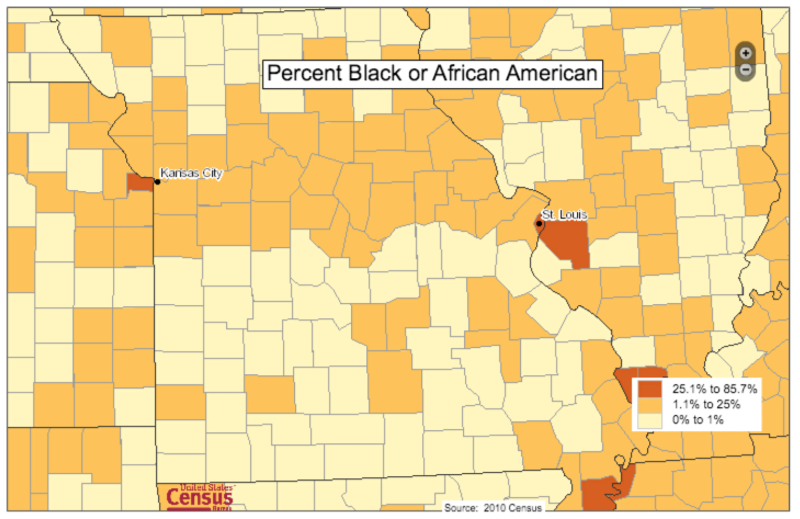 Census.gov data from 2010 showing stark differences in the population of Black of African Americans in Missouri.

I'm no race relations expert and thought my first blog post would be about the weather, but I'm more bothered by this than when a downpour ruins my "sunny and 75." Tell me how a city of nearly 8,000 is home to fewer than 40 African American residents (0.5 percent, 2010), while one in four citizens of nearby communities like Sikeston are Black (26 percent, 2010). I have struggled with this most of my adult life and there is likely only one explanation. I come from a community with a perceived history of racism.

As a broadcaster and public figure, this has been difficult to accept, much less admit. I'm not claiming Dexter's citizens are racist. Heck, there could be a valid unrelated reason for the demographic anomaly. However, there's no denying that I grew up in a place where literally everyone was the same color. This means that for the first 18 years of my life, when most behavior was learned, I was in an environment that (by its nature) did not promote inclusion, acceptance, or understanding of anyone different. I even vividly remember the first time I saw a woman with a burka on campus and had to search the internet for an explanation.

I was a high school graduate from a public school in the world's biggest melting pot with no understanding of a custom from the world's second largest religion. Let that sink in.

The recent events at the University of Missouri, similar to others of racial tension around the country, have challenged my inner being. I'm a proud alum. I love Columbia, recently rated a top 10 place to live in America. It's where I enjoyed waking Mid-Missourians up with their "Weather on the 7's" for eight years. So naturally I'm upset by the irrational behavior and bad publicity. I want to deny shit like this so bad.

Call it a natural gas leak. It's undiscoverable until someone says something publicly (often on social media) laced with an odor of ignorance. I don't want to be that guy. So I keep quiet. I'm scared to even bring up the topic with close friends in a private setting, let alone a public forum. I wonder, though. Maybe denial and silence from people like me fuels the tension just as much (if not more) than someone front and center of a demonstration.

If I've still got your attention, you are white, and/or your first 18 years started similar to mine in small town America, here's my point: It's okay to admit it. We come from a background that did not promote equality. We're not sure how it occurred, who's to blame, or if we can ever truly overcome it. But shrugging it off and failing to recognize how the past has likely jaded our present makes us idiots. Claiming empathy makes us bigots.

Looking back on my adventures with Terry, most of which included performing at all-white churches in similar communities to mine, I can testify that this man had courage beyond his years. Typical college shortcomings aside, I know our dialogue and relationship would be very different today. Not just because we are both older or smarter, but because I'm able to recognize the prejudice and biases that were a byproduct of my upbringing.

There is no blame to pass around. Mom and Dad, you did nothing wrong and I love you very much. Somewhere, somehow, a series of events or decisions made by leaders in my small southeast Missouri hometown have made it a very homogeneous place. The gross realization of how sheltered and ignorant I was (and still am) from this "fact" is a necessary perspective I must bring to every future conversation of race.