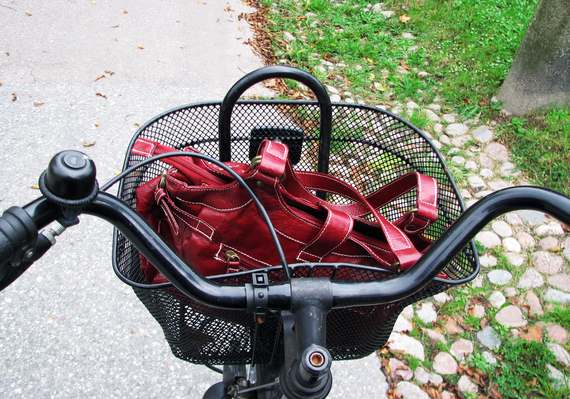 Before we get started, I disclaim: I was wearing tights under my dress. Fluorescent pink tights.

I don't care what you thought you saw as I rode my motorcycle down Pearl Street. You didn't see it.

And yes, those were gold ballet flats, and although they don't provide much ankle support, I was still wearing a helmet.

Plus, I changed into my Docs before I got on U.S. 36. (But I fear the pink leggings may have contributed to some looky-loo traffic congestion.)

I'm sorry. Now get used to it. This is a movement.

For fashion freaks, riding a two-wheeled single-person alternative vehicle -- a bike, scooter, motorcycle or cruiser -- seems like quite the quandary. You don't want to ride during the blizzardly pants-and-boots months. Then it warms up, and you want to wear dresses and peep-toes.

But the American cycling industry insists you cannot dress adorably and simultaneously sit on a bike. In fact, people are incapable of pedaling unless they are wearing flesh-sucking fabrics that end with an "x" (Spandex, Coolmax, Goretex), which would make even the marble statue of David look jiggly.

In fact, the League of American Bicyclists lists five materials under the "clothing" section of their webpage: the triple-x fabrics and wool and nylon.

No cute cotton dresses, satin bows, no patent leather flats or jersey stripes. Just the five most uncomfortable fabrics ever made.

Adding visual insult to this travesty, said fabrics shall only be produced in unflattering colors, such as radioactive green, radiation yellow and nuclear fission blue.

Heck, while we're at it, let's billboard the entire uniform in brand names to make the cyclist look like a sell-out, too.

No more! (Exclamation point necessary to accompany me jumping from my desk with my manicured fist in the air.)

This June, in honor of the annual Walk and Bike Month, I want to redefine the concept of cycling. Let's take bicycles back from the recreational hobbyists who have fooled skirt-wearers into thinking that a lightweight frame is somehow more important than how your basket is decorated. (As if.)

Boulder's Cruisers get this concept, but only on Thursdays when they meet for their costumed rides throughout town.

But what about the day-to-day folks who feel jailed inside their stuffy, gas-guzzling cars because they don't realize that hundreds of thousands of people across the world do not buy into the American Spandex myth?

Don't believe me? Believe Copenhagen. Yes, the entire Danish city, and the nucleus of the Cycle Chic movement, which has swept Europe and is now gracing New York and increasingly more U.S. cities.

Cycle Chic is about riding slowly and stylishly; enjoying the fresh air and not trying to race the Hummer to the stoplight. From the Cycle Chic manifesto: "I will ride with grace, elegance and dignity."

I can see the quintessential Parisian cyclist, in a flowy black dress (Europeans always wear black, you know), strappy sandals and an oversized sunhat, accented with a flower that matches the flowers on her basket. There is no secret cult of car drivers bashing her on anonymous online forums. She rides the bicycle as it was meant to be ridden.

According to Copenhagencyclechic.com, bicycles helped liberate the working class -- especially women -- at the end of the 19th century. "The bicycle was relegated to being merely a toy or piece of sports equipment," the website says.

Choosing style over speed means no cyclists darting in and out of traffic like little drunken Lance Armstrongs. It means no armpit sweat soiling your clothes, and thereby eliminating the argument for the x-fabrics that "wick away moisture." A leisurely pace also cuts back on the number of Marilyn Monroe skirt flashes, although simple leggings underneath also do the trick.

Spandex advocates argue that a skirt can catch in the spokes. So make a do-it-yourself skirt guard.

And on those days when your outfit calls for stilettos, toss them in a gorgeous basket, such as a black basket designed to look like lace ($60 by Marie-Louise Gustafsson).

Or if you're on a bike with an engine, Willie and Max makes saddlebags in pink, purple, burgundy, red and white. Just be smart, in both the American and British definition of the word.

Hardcore Cycle Chic-kens might frown on me for lumping motorcycles in with their cruisers and Schwinns. But I, too, understand the joy of riding slowly and stylishly.

And my quads could never propel me the 50 miles a day I ride to and from work.

My bike's name is Cerise -- French, of course, meaning cherry red. I call Cerise my "moving meditation," with no distractions, no radio, no cell phones or passengers or coffee cups balancing on the console.

Just me, Cerise and my skirt.

And my pink tights. Which, now that I think about it, happen to be Spandex-y. And radioactive pink.

This article originally appeared in the Boulder Daily Camera. Read more stories from the weirdest city in America, Boulder, Colorado, here: Only in Boulder.