Thirty senators sent a letter to the White House on Thursday warning President Bush not to take offensive military action against Iran without the consent of Congress. Noticeably absent from the list of signatories is presidential candidate Sen. Barack Obama, D-IL. 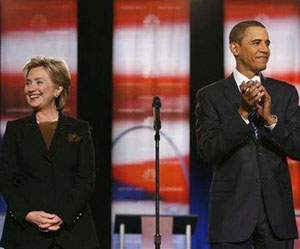 According to its authors, the letter was designed to clarify the ambiguity of the recent Kyl-Lieberman amendment designating Iran's Revolutionary Guard a terrorist organization. Obama has been critical of that amendment as well as the Bush administration's aggressive rhetoric towards Tehran. Yet the senator from Illinois turned down a request to sign on to the White House letter.

"I was surprised and disappointed," John Isaacs, president of the Council for a Livable World and one of the catalysts behind the letter, told the Huffington Post. "I contacted virtually every office and to me it was a no-brainer that Obama and [Sen.] Biden [whose name was also not on the list] would both sign on. Neither did."

The letter, which was spearheaded by Sen. Jim Webb, D-VA, was signed by presidential candidates Sen. Hillary Clinton, D-NY, who voted for the Kyl-Lieberman provision, and Sen. Chris Dodd, D-CT, who opposed it. It reads:

"We are writing to express serious concerns with the provocative statements and actions stemming from your administration with respect to possible U.S. military action in Iran. These comments are counterproductive and undermine efforts to resolve tensions with Iran through diplomacy."

Sources knowledgeable with the crafting of the letter said there were two general arguments offered by those who did not sign on in support: that Congress already has the power to declare war, and that the text was too vague about defensive and/or covert action against Iran. Notably, Senate Majority Leader Harry Reid (D-NV) also declined to attach his name.

"Senator Obama admires Senator Webb and his sincere and tireless efforts on this issue. But it will take more than a letter to prevent this administration from using the language contained within the Kyl-Lieberman resolution to justify military action in Iran. This requires a legislative answer and Senator Obama intends to propose one."

"Sen. Biden voted against the amendment urging the designation of the Iranian Rev. Guard as a terrorist group. He strongly opposed it because he believed it could be used by this President to justify military action against Iran. He has also made clear many times his view that the President lacks the authority to use force against Iran absent authorization from Congress. He didn't need to clarify that position - he's been clear from the start," said Biden spokesperson Elizabeth Alexander.

We are writing to express serious concerns with the provocative statements and actions stemming from your administration with respect to possible U.S. military action in Iran. These comments are counterproductive and undermine efforts to resolve tensions with Iran through diplomacy.

We wish to emphasize that no congressional authority exists for unilateral military action against Iran. This includes the Senate vote on September 26, 2007 on an amendment to the FY 2008 National Defense Authorization Act. This amendment, expressing the sense of the Senate on Iran, and the recent designation of the Quds Force of the Iranian Revolutionary Guard as a Specially Designated Global Terrorist, should in no way be interpreted as a predicate for the use of military force in Iran.

We stand ready to work with your administration to address the challenges presented by Iran in a manner that safeguards our security interests and promotes a regional diplomatic solution, but we wish to emphasize that offensive military action should not be taken against Iran without the express consent of Congress.