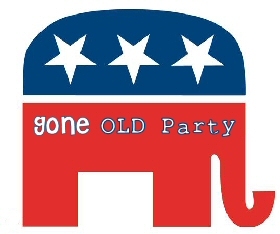 Prior to the start of the war in Iraq in 2003, Secretary of Defense Donald Rumsfeld made a distinction between "Old Europe" that opposed the American war and "New Europe" that supported that war. Other members of the Bush Administration and neo-conservatives picked up on the distinction. Be that as it may, it is now crystal clear that New America is with President-elect Obama and the Democrats, while Old America clings to the Grand Old Party, with the emphasis on the middle name--a middle name that, ironically, had a greater impact on the outcome of the election than did that of the Democratic nominee.

The United States is changing and the principal question about this year's vote was whether it would be the last of the old elections or the first of the new elections. If it was the former, John McCain might eke out a narrow victory. If the latter, Barack Obama would win.

A depiction of Old America would be as a black-and-white (or, more accurately, white-and-black) photograph. New America can be painted only from a full palette. 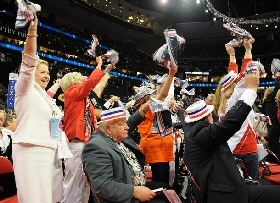 Look at the party conventions. One was monochromatic; the other presented the range of human colors. Aside from the presence of far more female delegates, the Republican gathering in Minnesota looked like a convention of either party from before the 1960s--or an all-white country club. The Democratic convention in Colorado looked like America . . . New America. Diverse America.

John McCain won Old America. He carried whites by 12 points, 55% to 43%. But Barack Obama won New America in decisive fashion, carrying 95% of African Americans, 67% of Hispanics, and 62% of Asians. And the Democrat won first-time voters by the astounding margin of 69% to 30%.

The Rotten Fruit of the "Southern Strategy"


Richard Nixon's "Southern Strategy" bore fruit for the GOP for four decades, but now that fruit has rotted. The Republicans have now totally lost much of the rest of the nation. And they are even starting to lose the South, too. 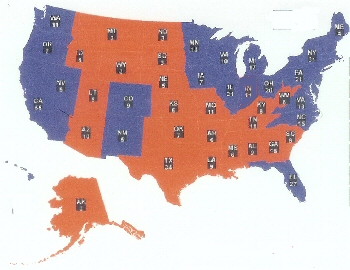 Look at the electoral map. Almost everywhere where there is substantial diversity beyond the white/black division of the Old South is now blue. And Obama made significant inroads into the old Confederacy. Blue is seeping down the Atlantic Coast (and up from southern Florida). And as blue has moved south on the east coast, it has moved east from the west coast. Arizona almost certainly would have joined Nevada, New Mexico and Colorado as blue states had the Republican nominee not been from that state.

What Sarah Palin and other Republicans call the "real America" is a shrinking, backward-looking fraction of the nation. What is left to her party is the non-Hispanic parts of the Mountain West (including Alaska), the southern Great Plains, a shrinking portion of the Old South, and Appalachia.

The McCain campaign's slogan, "Country First," became "country only." The suburbs have joined with the cities in the New America, leaving only the wide open spaces of the "country" red, and the problem with wide open spaces in political terms is precisely that they are wide open--not that many people live in them.

In the late 1960s, the Republican Party made a political pact with the devil. That pact involved the intentional division of America. Vice President Spiro Agnew called it "positive polarization--to divide on authentic lines." A young Patrick J. Buchanan said in a memo to Nixon that they would "cut . . . the country in half; my view is that we would have far the larger half."

It worked for most of the next four decades, but now the Southern Strategy, which married the Republican Party to Old America, has finally left that party with far the smaller "half."

The tried and false strategy of the Republicans has been "divide and conquer." They sought to created a Disunited States of America, not One America, but two Americas. Their American motto could have been expressed as: e pluribus duo.

New America is one America, an America that finally fulfills the motto e pluribus unam.

"America" has always had two meanings: a real place, America, and an ideal, America. On November 4, 2008, America finally came close to becoming America: the reality moved much closer to the ideal.

What President-elect Obama promises to do is to represent New America, one that is defined as us and them, not us or them. This land is your land and this land is my land.

Historian Robert S. McElvaine is Elizabeth Chisholm Professor of Arts & Letters at Millsaps College and the author of The Great Depression: America, 1929-1941 (Random House). His latest book is Grand Theft Jesus: The Hijacking of Religion in America