Alex MacLean has seen Detroit from the sky at various stages since 1980. The large green-spaces below, for example, were once crowded neighborhoods and business districts in a city's footprint that is large enough to fit Houston, Boston and Manhattan. These grassy fields seen from Google Maps might be mistaken for parks. 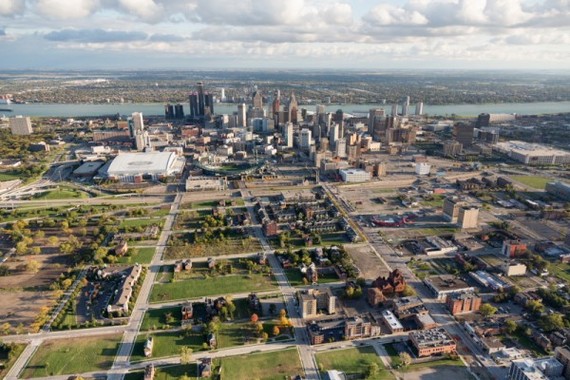 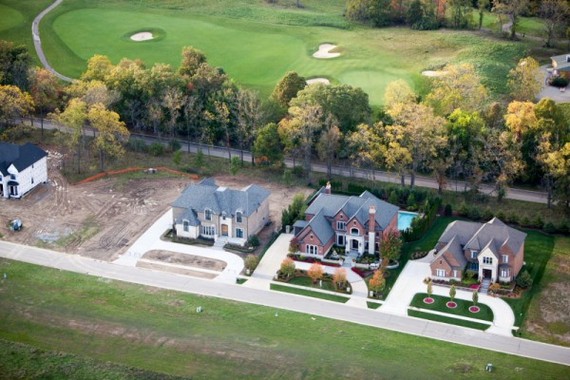 A trained architect, pilot, author and photographer, MacLean lives in Massachusetts but has seen Detroit from above as Ronald Reagan received the Republican presidential nomination, for the 1998 demolition of the landmark Hudson Building and last autumn at a request from the New York Times. Each visit is like dropping into a different chapter of the city's history -- urban farms were previously dangerous abandoned homes and lots.

From the sky, many travelers have to change planes in the hub of Detroit Metro. As they glance out the window and see the river and the skyline, are they like a student asked to pick out a novel to read, examining the number of pages and the size of the font. Is it worth their investment? Is it going to be fun or painful?

And as any librarian might agree with Alex MacLean, it doesn't hurt to look a little more closely to actually read a few of the words -- to look closer at those green patches.

I was a two-year English teacher trying to get kids to read novels in 1989 and did feel more than a little envy seeing Robin Williams' John Keating in Dead Poets Society pointing out how a view from above can be uncomfortable but revealing...

Granted, I waited a few more years before climbing my own classroom's furniture, I was reminded of "Oh Captain, My Captain" when Thomas Reed, my Digging Detroit co-producer shared MacLean's New York Times "Detroit by Air" (link) -- illustrating the stark contrasts, the"haves" and "have-nots" of empty lots surrounding $10,000 homes in Detroit staring across Alter Rd. into Grosse Pointe where home value grows exponentially the closer you get to Lake St. Clair. 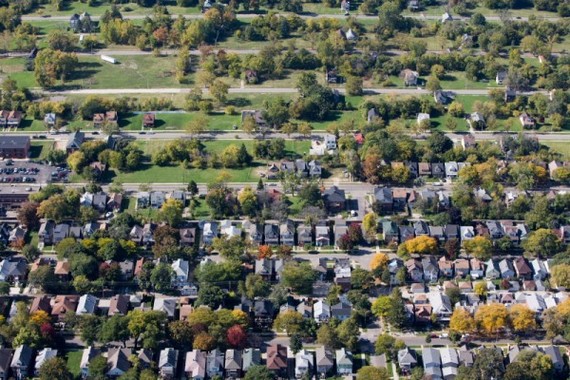 The concept of a single street as Detroit's frontier borderline was made even more famous by the Eminem film 8 Mile, echoing the "Detroit vs. Everyone" feeling seen on a best-selling t-shirt -- and even reflected in sports-radio callers responding to poor officiating in the Lions-Cowboys playoff game three weeks ago.

Detroit's 1967 riots are famously, if inaccurately, identified as the launching pad of "White Flight." Digging Detroit's historian Peter Kalinski, points out the exodus began just minutes after VJ day. Gas was cheap, yards were plentiful and nobody needed to live on top of one another. 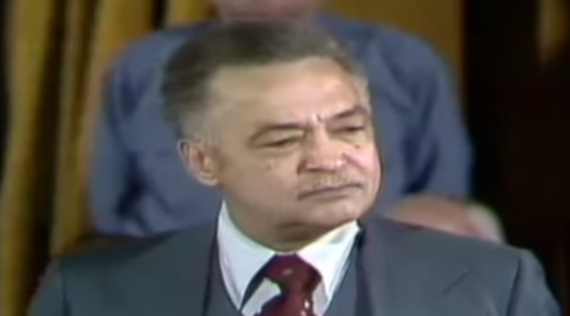 Coleman Young at the 1974 Mayoral Inauguration

Another misconception that is prevalent amongst the 4.8 million living around Detroit surrounds the city's first African-American mayor, Coleman Young -- a former Tuskegee airman, union-leader and state representative whose first few speech as mayor was reduced to a phrase that lives too healthily past the death of its speaker.

"We must build a new people-oriented police department. And then you and they can help us to drive the criminals from our streets. I issue open warnings now to all dope pushers, to all rip-off artists, to all muggers. It's time to leave Detroit. Hit Eight Mile Road. And I don't give a damn if they're black or white, if they wear Superfly suits or blue uniforms with silver badges. Hit the road."

And all that remains, four decades later, is "Hit Eight Mile Road."

Many metro-Detroiters still choose to remember the speech if not Young's exporting crime to the suburbs at least one giant un-welcome mat to the outside world -- an interpretation contrary to the first part of his very brief speech which made a strong plea for racial cooperation.

And as many who do not hear the actual words or read the entire speech it's certainly easy to understand the wrong impression raised by the headline in The Detroit News, "Young's Tough-On-Crime Remark Angers Suburbs." Perhaps nothing makes people angrier than being told they are angry. Bill McGraw of DeadlineDetroit lays much of the blame for this division squarely at the feet of the ever-present "Mayor of Suburbia," Oakland County Executive, L. Brooks Patterson (link) whom he cites:

"I think he [Young] took the city down because he was hell bent on... getting even for what he considered or perceived to be a lifetime of discrimination and insults and so forth,"

If it wasn't Us vs. Them it became Us Not Them. In 1990, the Democrats ignored Detroit as sitting Governor Jim Blanchard chose not to court the mayor, who didn't do much to get out the vote. Blanchard lost to underdog John Engler by only 17,595 votes -- with a total voter turnout of just 38.6 percent.

This apathy, ushered in a three-term governor whose drastic cuts to social and educational programs in the state are still being felt.

Alex MacLean, is no stranger to the same paradoxes he has seen in Detroit. Looking over the alphabetized roster of his undefeated 1968 Harvard Crimson football team, further down the page from senior MacLean, you'll see his classmate, fellow-guard and future Oscar-winner, Tommy Lee Jones.

Despite the violent sport, MacLean was a conscientious objector and member of Harvard's Students for a Democratic Society, the same group that protested then marooned Secretary of Defense McNamara in his car on a campus visit in November 1966. A fear of flying did not change his mind to get his pilot's license and pursue a career in aerial photography along the lines of his architectural and design degrees. Few Harvard graduates had to wait tables either, for that matter.

In MacLean's work, he has become famous for social juxtapositions -- presenting a grown-up version of Sesame Street's "One of These Things is Not Like the Other." Industrial waste, open-pit mining and urban sprawl (see portfolio) is presented oddly beautiful and scientific in his extreme shots, placing near one another the Dresden-like image of the Packard Plant's ruins... 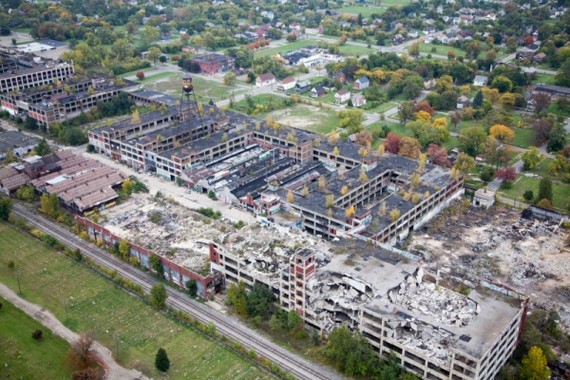 ...beside the single-family mansion and private pond of West Bloomfield. 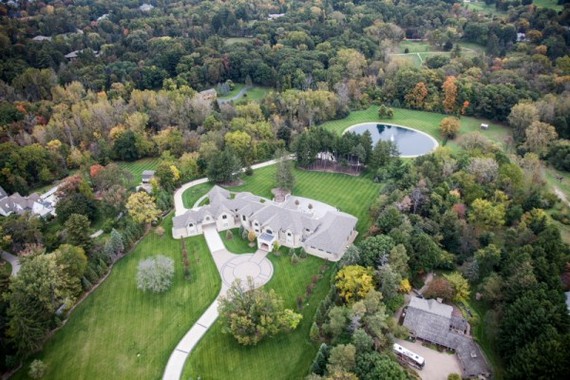 In a Digging Detroit podcast, MacLean shared with us his surprise at the viral-spread of his article, which became, according to MacLean, the second most shared page of the New York Times that week. He was also surprised by the heartfelt support for his images from many Detroiters.

"I received lots of calls from friends who, it turned out, grew up in Detroit who are so happy and so sentimental about Detroit and how much they loved it. it was touching and interesting at the same time. It seems like there's a hard-core loyalty among past residents of Detroit."

As many homes are razed, some remain in century-old claustrophobic proximity to one another - - surrounded by optimistic farmland, reflecting Detroit's resiliency, creativity and sense of history. Alex MacLean ends our conversation with the feeling of hope from so many metro-Detroiters with 3-5 generations of history in these lots, "Gosh, anything I can do to help the city along, count me in!" 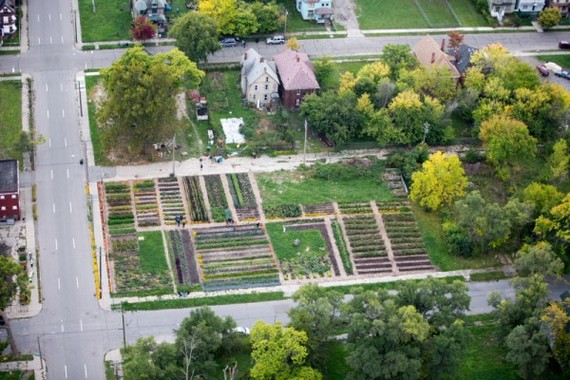