By Katie Scolari-Borden and John Sauer, Water For People 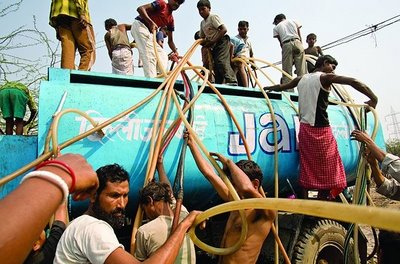 At the Aspen Environment Forum 2011 (May 30-June 2) discussions focused on the implications of reaching the 7 billion global population mark, which should occur by Halloween. This will have serious implications for food supply, public health, energy, and the environment. Discussions at the forum covered topics such as viewing cities as metabolism, harnessing social media for mobilizing environmentalists, and allocating more resources for family planning. The conference exhibited the breadth and complexity of achieving balance on a crowded planet.

Despite the enormity of the challenges of mitigating our footprint, reducing carbon emissions, and providing sanitation to the 2.6 billion people without a toilet, the forum was a good reminder that adversity brings opportunity. There is a sense that some of the thought leaders at the forum are working on approaches that could produce big results.

For example, one of the grand challenges will be feeding the world population as it careens toward 9 billion or more. Only 4% of African farms have irrigation, according to Sandra Postel, Freshwater Fellow of the National Geographic Society. Is this an opportunity? What if urban/city farming could go mainstream and spread to megacities in developing countries like Lima and Nairobi? What about the potential of perennial grain seeds, as discussed by Jerry Glover from USAID: "70% of the Earth's farmland is planted with annual crops (wheat, corn, rice), which provide nearly 70% of the calories that sustain the world's populations. The problem is that annual crops must be planted from seed every year."

So, just as irises bloom from year to year, we could have perennial wheat crops to regenerate and sustain the soil.

Two of the key challenges of controlling population growth will be greatly improving global public health and drastically reducing poverty. Safe water and adequate sanitation underpin both these challenges. But part of the issue impeding progress is that development metrics are based on inputs instead of outcomes. This lack of systems thinking has resulted in several unintended consequences, such as working at a scale not large enough for replication, as well as not meaningfully engaging the private sector and other local partners, including governments, in the development process.

The result is that there are still many barriers to development, such as corruption, bad policies, and lack of human and technical capacity. But bigger-picture thinking and engagement can break these walls down, and probably more quickly than we think. Water For People's CEO, Ned Breslin, spoke about impact investing and how small business could greatly benefit from early-stage social enterprise funding in order to expand the business approach to solving water and sanitation challenges in the face of population growth and migration.

One notable -- but easily fixable -- failure of the forum was the significant gap in perspectives from the developing world, where most of the population growth will happen over the next century. The UN Population Division reports that the population of the 49 least developed countries is still the fastest growing in the world, but participation by those countries was largely missing. There were representatives from major US cities, multinational corporations, environmental scientists, and activists, who helped provide varying perspectives on the challenges we face. But where were the voices from São Paulo or Kolkata or Phnom Penh? Certainly the urban planners, activists, scientists, governments, and private sector from these rapidly growing places would have enriched the discussion considerably.

For next year's forum, it would be wonderful to see these critical actors better represented among the presenters, in particular, to help motivate further dialogue about incentives. Incentivizing consumers, governments, and corporations to see the economic value in consuming less, differently, or better is critical to achieving the outcome envisioned by the conference organizers. It would be great to see next year's conference include participants from places that have been able to move the needle on the human-planet balance by working together and finding shared value.