In a scandal-ridden recall election, Arizona state senate president Russell Pearce revamped his campaign website earlier this summer after I published an investigation on Salon.com that demonstrated the self-proclaimed "Tea Party President" had cut and pasted large sections of texts from some of the most notorious white nationalists and fringe third party candidates from across the country.

New evidence now raises further questions over whether the architect of Arizona's controversial SB 1070 immigration law also borrowed -- in truth, plagiarized -- significant parts of an outrageously inaccurate email on immigration from one of his state's own fringe lawmakers, state Sen. Sylvia Allen, for an article he authored in a widely denounced white nationalist publication.

In the article, Pearce opines on "why we need SB 1070," and the need to follow the rule of law. He rails against "leftists here and in DC," and asks, "how long will it be before we will be just like Mexico? We have already lost our language; everything must be printed in Spanish. We have already lost our history since it is no longer taught in our schools. And we have lost our borders."

To support his argument, Pearce reports unsubstantiated evidence from a recent senate hearing he had sponsored, including testimony from one rancher who had found "17 dead bodies and two Qur'an bibles" on his property, and the unverified claim that "in the last few years, 80 percent of our law enforcement personnel who have been killed or wounded were done by an illegal alien."

However, earlier that summer, Sen. Sylvia Allen, who made national news as a certified wingnut in 2009 for her comment that uranium mining was safe because "the earth was 6,000 years old," had sent out a very public email on May 3, 2010, explaining her views on SB 1070. The email was so ridden with factual errors that state Sen. Kyrsten Sinema published a response, in an attempt to clarify Allen's wild claims.

In her email, Allen also reported that "17 dead bodies and two Koran bibles" had been found on a rancher's property, and also stated without any factual evidence that "in the last few years 80% of our law enforcement that have been killed or wounded have been by an illegal."

In fact, Allen's email and Pearce's article are nearly identical, which begs the question: Did Pearce plagiarize from Allen for his white nationalist publication, or did Allen plagiarize from Pearce for her public email?

Here's some of the text from Pearce's article: 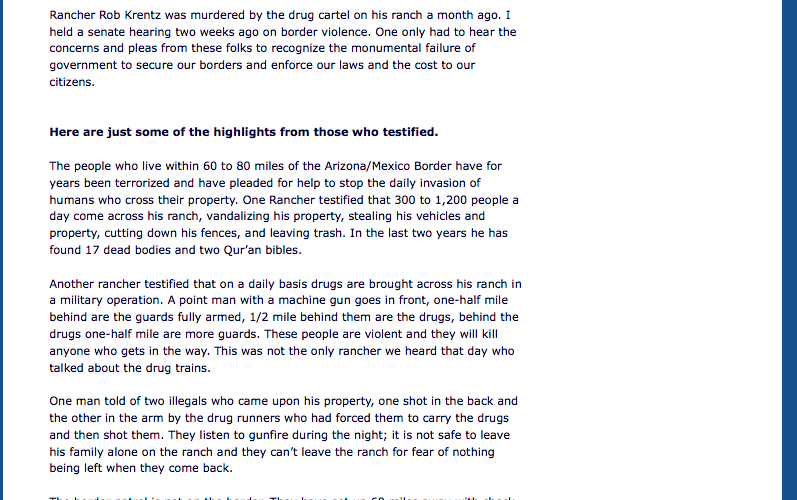 Here's some of the text from Allen's email: 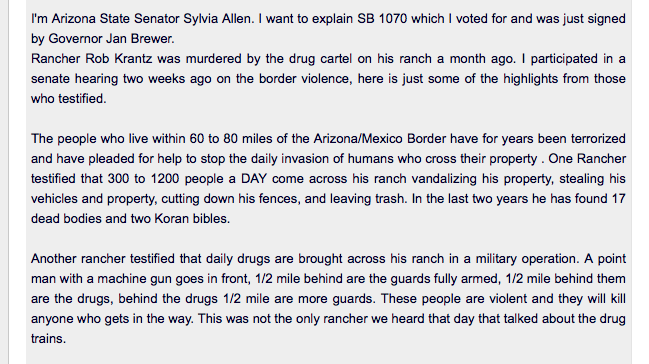 Here's how Pearce ends his article:

This is how Allen ends her email: 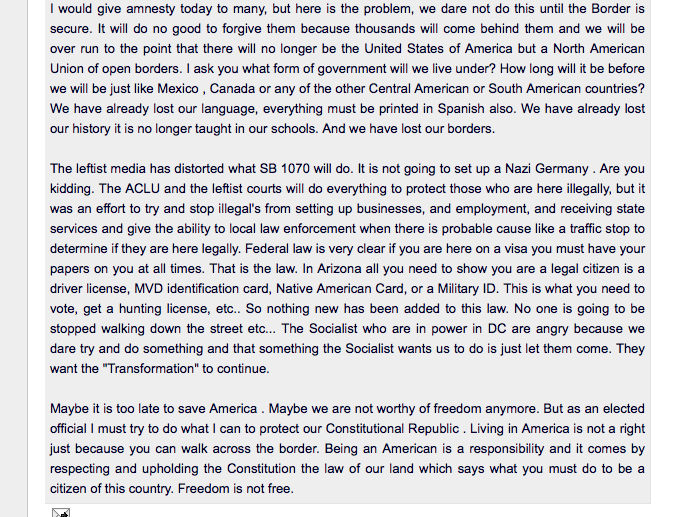 While both email and article conclude that "freedom is not free," cutting and pasting text from fellow Tea Party legislators is certainly cheap.