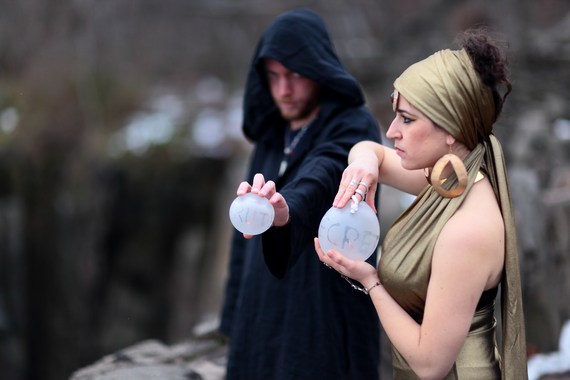 Hailing from the endless well of talent in New York City emerges the unique family duo, Metabards. Their fascinating blend of electronic music, Eastern soundscapes and trip hop creates a genre-bending sonic experience that is reminiscent of other artists yet still completely innovative. Edgy, soulful and melancholic, the Metabards have accomplished musical alchemy with their debut EP.

Metabards consists of Wisa1 on machines and his cousin Tianya on vocals. Wisa1 has been familiar with electronic music since his teens. Removing himself from the normal teenage debauchery of his peers, he spent his nights with fellow EDM enthusiasts, endlessly dancing and slaking their thirst for the pulsating bliss of electronic music. This led him to eventually trade the boom box for a pair of belt drive Stanton decks as he began his journey as an electronic dance Shaman through the gorgeous grime of the underground.

Over the next ten years, Wisa1 gained so much momentum that all he could do was embrace it. Exotic locales and mind expanding intoxicants lifted him while also humbling him. He was open to receive the world in all its forms while sharing his music with it. From 48 hour weekends in the legendary Berghain nightclub in Berlin to the lawless airbase parties of Picardy, Wisa1 has been led on an epic adventure by his ceaseless love of music. The Metabards were but a twinkle in Wisa1's third eye until a chance encounter with an old relative turned that twinkle into a flame.

Musical nomad Tianya, which means "sky horizon at the edge of the world," found her voice at the age of 13 singing along to the infections rhythms of Buena Vista Social Club. This began her passionate love affair with music which she continued to nurture in the RSL (Returned and Services League of Australia) clubs and backroom cabarets of Sydney. No event was too big or too small as each opportunity she had to sing sharpened her vocal skills. Tianya even entered various talent competitions, exposing herself to the uglier side of the music industry, a world of desperate divas and ruthless stage mothers. Though she knew she was destined for a greater purpose than the smoke and mirrors of industry standards, she learned, grew and evolved with each opportunity she was given. 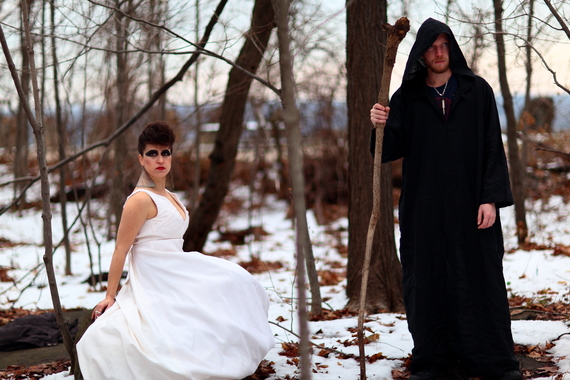 While she honed in on her vocal skills, she also worked on her linguistic skills, adding several languages to her lexicon. This provided her the freedom of exploration as she plunged into the enticing world of travel. In India, she performed for the grandiose opulence of the upper class and also befriended an old Bengali singer who regaled Tianya with the music of her culture and spun the yarns of Hindustani epics. Her next excursion was to Venice, Italy, where she found work rowing a gondola down Monet's pastel canals, romantically serenading transient tourists as if she were an Italian village girl.

Tianya's musical quest continued as she sang Arabic lullabies in the Middle East, became fluent in the melodramatic language of tango music in Buenos Aires, and learned the ancient songs of the Yoruba in Cuba, a sonic secret passed down through generations of slaves which was long concealed from the Christian conquistadors. As she traversed and adapted to many different cultures which she explored through the power of song, she became enlightened of the transcendental power of the voice as a vessel. Through singing, she was able to communicate the realms of the temporal and the divine, to her listeners as well as to herself.

All of these adventures contributed to Tianya's evolution, however it was her last stop at a remote farm in the French countryside that was the most pivotal. It was there that her trajectory collided with the momentum of her cousin, Wisa1, who was crafting his electronic visions into viscous vibrations. His fervor for creation inspired her to realize that after years of singing the songs of others, it was finally time to sing the songs of herself. Thus, the Metabards were born and together they channeled their very distinct musical palates into their debut self-titled EP.

Full of mystique, potent soundscapes, and Tianya's profound lyricism, the Metabards have tapped into a sonic spirituality that travels beyond the confines of stereotypical electronic music. The leading single "Prometheus" is a modern retelling of the ancient Greek myth that features the gliding upright bass of Noriko Ueda. With elements of jazz, trip hop and electronic, "Prometheus" is a beautiful manifestation of how Tianya and Wisa1 have evolved together. Having already performed in France, Brussels, and Cuba, the Metabards are sharing their timeless music with the world and the world is gladly embracing it. Introspective and distinct, the Metabards EP is just the first footprint on their enlightened path to sonic Nirvana.