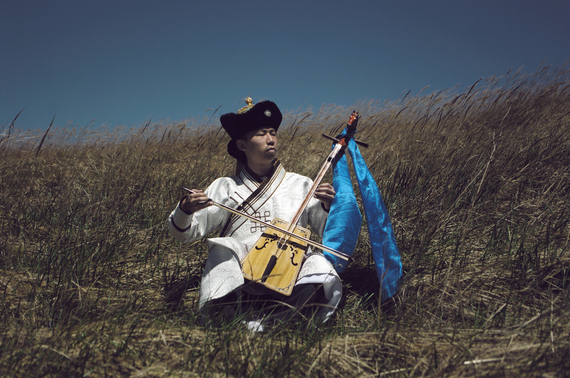 The language of music is one that can be understood universally. Some music even has the power to communicate cosmically, through penetrating frequencies and otherworldy dimensions. Music can act as a conduit to express human emotion in a way that words cannot define. It also has the power to control human emotion with its multitudes of tones and combinations of sounds. In film, music is a highly emotive force that resonates through spectators emotional strings like the plucking of a harp. It can send chills, celebrate triumph, inspire romance and evoke sadness. What is even more powerful than the music itself is its creator.

Nature Ganganbaigal is a Mongolian music composer and horse-head fiddle player from China who has recently completed his Masters in Music at New York University with a concentration in Scoring for Film and Multimedia. He has received several accolades and is the winner of New York University's 2014 Film Score Competition. His winning score was performed on Broadway. Becoming a regular in the film festival world, Nature's cosmic sounds are unique and recognizable. He has even dabbled in the world of video game music composition.

In addition to his masterful composing abilities, Nature is also an accomplished Mongolian horse-head fiddle player, an ancient string instrument that plays the sounds of Mongolian culture. With one foot rooted in his Chinese past and the other sharing these roots with an American audience, Nature is a well-rounded musician who is even the composer and lead singer of Tengger Cavalry, an internationally recognized rock band.

Noisey wrote, "His tightly-held beliefs in Tibetan Buddhism and shamanism provide a deeper source for the positive message behind his music." His genre-bending Mongolian folktronica paints beautiful images of sweeping landscapes, surreal vistas and moments of triumph. With so many complex layers of sound, Nature's creations are vast and spellbinding, captivating and magical. Without words, he teaches the listener of an ancient time, rich with color, culture and sensory bliss.

In September of 2014 he released his first solo album titled To Where Tengger Leads Me. All 12 tracks tell a sonic story of heroism, ancient culture, animal spirits, adventure, and the majesty of the Chinese landscape. While each track offers its own musical flavor, "Hymn Of The Earth" spoke to me the strongest both rhythmically, instrumentally and narratively. An evocative song which transports you into his world, I was able to travel without moving, see without looking, and hear without listening. Organic and inorganic simultaneously, his folktronica flows through your mind in pure, liquid sound.

As his bow gallops upon the fiddle, it is easy to hear his film score capabilities. Just listening to his rich compositions sans imagery unfurls an epic film in your mind's eye. Evoking synesthesia, Nature Ganganbaigal blurs the boundaries of the senses causing the listener to hear color, feel smells, and see sound. He has not only achieved success with To Where Tengger Leads Me, but transcendence into a cosmic frequency of sound. Music that is not solely for entertainment, but for ascension to a higher plane. His spirituality is manifested through his music, a gateway from the earthly to the divine. Nature Ganganbaigal brings his voyagers on a sacred odyssey to discover their sonic bliss.