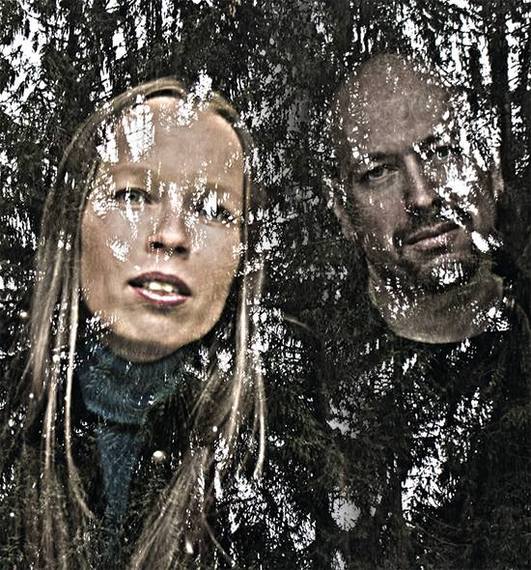 The West Coast of the United States has always emanated a romantic vision of rainbow sherbet sunsets, velvety golden hills, healthy living, and progressive thinking. The psychedelic Renaissance of the 1960s played a large role in this imagery as Ken Kesey and his Merry Pranksters roamed around the country, sharing their California sensibilities (and LSD) with those who were willing to be "turned on." Though California is undoubtedly one of the most geologically diverse and beautiful places to live, like everything bright, it also has a dark side.

Hailing from Germany but transplanted to San Francisco, songwriter and producer Chris Wirsig of the electro-noir-pop duo no:carrier, depicts a more obscure vision of California. The other half of the duo, Cynthia Wechselberger who is the singer, still remains in Germany which does not impede on their musical partnership. Released in May of this year, their four track EP Ghosts Of The West Coast, is a haunting collection of cover songs that they describe as "the American dream gone wrong."

The album begins with a rendition of Don Henley's "The Boys Of Summer" which tells the story of a lurking ex-boyfriend who is woefully looking for his lost love at the end of summer. Next comes Belinda Carlisle's tragic track, "California," which warns the listener of the perils of fame and show business, referencing the late River Phoenix as a victim of this peril. Following "California" is Tony Carey's "Room With a View," an unfolding tale of broken dreams and misfortune which eventually lead to homelessness and anguish. The final track, "She Moved Through The Fair," is a traditional Irish song about lost love and a strange choice to put on an EP titled Ghosts Of The West Coast as it breaks the thematic cohesiveness of the album.

Each track is sung by a different singer which creates a unique feel to each song. The only track performed by Wechselberger is "She Moved Through The Fair"; Melissa Harding sings "California," Kalib Duarte sings "The Boys of Summer," and Lauralee Brown sings "Room With a View." Though the entire EP is cover songs, the haunting and somber vibe of Ghosts Of The West Coast possesses an inimitable sound that reinvents old tunes.

"We can't be compared easily. We have our very own sound that includes elements from several styles - from dark wave to synthpop, from acoustic to electro," says Wirsig. "We're not going on the trodden paths, we stay true to our ideals and write and record exactly the songs we want." Founded in 1995 in Germany, no:carrier was unafraid of sound experimentation and emotive tracks.

After releasing their critically acclaimed third album Wisdom & Failure in 2014, no:carrier has been experiencing a momentous pinnacle in their career in 2015. Later this year, the duo plans to release a remix collection of new original material that promises the same melancholic and bittersweet tones that they have spent the last few years building and establishing.