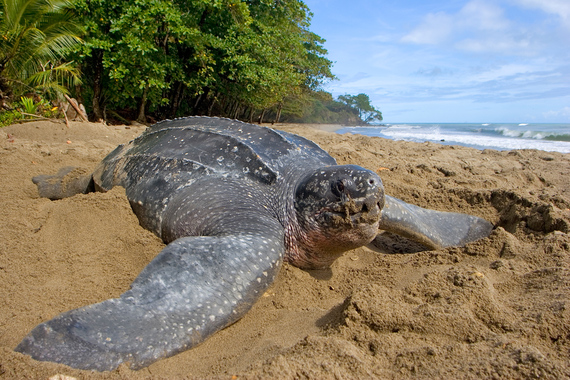 Everyone loves biodiversity. No one wants species to go extinct. (I know I might be naïve, but just humor me.) But there are only so many resources out there for conservation, so we can't do everything necessary to protect all species, everywhere, all the time. This requires priorities. And priorities require knowing how individual species are faring and what threats they face.

But to compare the status of so many different species, we need a common system that uses an established set of criteria and guidelines. Fortunately, The Red List of Threatened Species is just such a system. Coordinated by the International Union for the Conservation of Nature (IUCN), the Red List is the only globally accepted system for evaluating the status of any species -- redwood tree, bald eagle, cutthroat trout, meadow vole -- anywhere in the world.

So if Red List can tell us the status of any species, we're all set, right? Let's look at a couple of hypothetical "species" to see how Red List works.

Species A has declined by more than 90 percent in the past 30 years, and continues to decline. Although some important threats have been reduced dramatically, others remain, and their impacts are poorly known. Key habitats used by the remaining individuals are under further threat from development of buildings, roads, and other human infrastructure.

Species B has an enormous range spanning over tens of thousands of kilometers, dozens of countries, and is very abundant, with tens of thousands of breeding females annually. Although it still faces serious threats, it enjoys protection throughout much of its range. It is increasing in numbers.

They seem very different, don't they? Would you be surprised to know that the Red List considers both of them to be "critically endangered"? How can we prioritize our conservation efforts effectively based on this confusing guidance?

Both of these hypothetical species actually belong to the same species, the leatherback sea turtle (Dermochelys coriacea). Despite the enormous differences between Species A (leatherbacks in the East Pacific Ocean) and Species B (leatherbacks in the Northwest Atlantic Ocean), these two populations--indeed, all leatherback populations, anywhere in the world--are painted by the same Red List brush: they are Critically Endangered. Red List assigns a single global listing to a species, which works well for species with small geographic ranges and population sizes. But it doesn't always work for species with huge geographic ranges and complex population dynamics.

For decades, this problem has plagued the IUCN Marine Turtle Specialist Group, which is responsible for assessing the global status of marine turtles. Until now.

We just completed a new set of Red List assessments for leatherback turtles that evaluate the unique status of each leatherback subpopulation separately. These subpopulation assessments are an important breakthrough because they reflect status at relevant biological scales, e.g., East Pacific versus Northwest Atlantic, and provide more targeted guidance for conservation efforts than do global assessments.

These assessment results described the wide variation in leatherback subpopulation status, accurately highlighting subpopulations that have declined greatly over time, as well as those that are small and/or geographically restricted, and merit Critically Endangered status, including the East Pacific subpopulation.

This is the first time that any marine turtle species has been officially assessed to the subpopulation level, and sets an important precedent for Red List assessments of other marine turtle species, as well as those of other widely distributed, long-lived species, such as sharks, marine mammals, and seabirds.

Reconfiguring how we do status assessments is just one necessary improvement to how we design effective conservation around the world. But thanks to this change in perspective -- from global to regional -- we will now be able to prioritize our limited conservation resources a bit better.

Bryan Wallace is Chief Scientist of Oceanic Society, and Red List Focal Point for the IUCN Marine Turtle Specialist Group. Join Oceanic Society on Facebook or follow us on Twitter (@OceanicSociety) for updates on our work.