You know we're living in an odd world when prominent atheists encourage people to read scripture. More than 50,000 viewers each day sample atheist science blogger PZ Myers' posts on Pharyngula. "There's no surer way to make an atheist than to get someone to actually read the Bible," says Myers. Here is why:

Genesis 6 and 7, for example, tell of God planning and executing the slaughter of billions of innocent animals and millions of children in Noah's flood. In the words of one distraught parent, "A few weeks ago I read my son a book on Noah's Ark and my brain started to hurt. It just never really hit me before how truly awful this story is."

Sometimes it is the kids themselves who notice the disparity between the morality portrayed in a holy book and the morality they (and their modern culture) take for granted. Author Nancy Ellen Abrams recounts her run-in with ancient scripture as a child:

"My career in Hebrew school began and ended in the second grade. The first story we read was about Abraham smashing all the merchandise in his father's religious idol store, and we were supposed to sympathize with Abraham when his father consequently threw him out. The next story was about Abraham not batting an eyelash at taking his son to a mountaintop to kill him. This was too much for me. 'Who is Isaac supposed to pray to?' I asked, in perhaps a less than respectful tone of voice. This question elicited an icy stare and a long silence. I was never called on again and eventually I stopped going. That was the end of my Hebrew education."

The brutality of ancient scripture is indeed an inconvenient truth -- a truth that outspoken atheists are all too happy to point out. Consider: Deuteronomy 3:2-6 and 7:1-2 has God commanding the ethnic cleansing of millions of inhabitants of Canaan, including women and children. And the Book of Revelation has God in the future, with the assistance of Jesus, once again brutally torturing countless animals and human beings of all ages, including children. 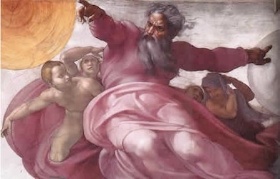 Nearly a decade ago, I myself was taken aback when a churchgoer lent me an audiocassette book by one of the earliest "New Atheists": Michael Scott Earl. My wife and I had already been shaken by listening to Earl's first audiobook, Bible Stories Your Parents Never Taught You. Listening to his second, The Ultimate Terrorist, was even more painful.

I shall never forget one dusk, watching the full moon rise straight ahead while driving eastward across Ohio. Earl was speaking these words:

"If we want to know why people kill in the name of God, and why they have been doing so for thousands of years, we must face one simple and obvious fact that almost nobody wants to confront. The fact is this: the God of Judaism, Christianity, and Islam -- the God of monotheism -- is a terrorist. This is not mere hyperbole on my part; it is an easily verifiable fact. For example, the U.S. Department of Defense defines terrorism as 'the calculated use of violence or the threat of violence to inculcate fear; intended to coerce or to intimidate others in the pursuit of goals that are generally political, religious, or ideological.'"

"When we look at an event like the conquest of Canaan, the massacres of millions of women and children, we must not lose sight of the fact that these actions were carried out in response to orders from God. The Bible makes that absolutely clear. When we read the brutal Law of Moses, where people's brains are being bashed in with rocks for breaking the Sabbath, for having sex with the wrong people, for believing the wrong things: all of these atrocious laws can be traced back to God. And when we read in scripture about hell, about billions of unbelievers being tortured in fire for all eternity -- it is God who is orchestrating all of this. God employs the calculated use of violence or the threat of violence to inculcate fear -- and he does it for religious reasons. In anybody's book, that's terrorism."

So here's my vision:

Thinking of "divine revelation" in mere mythic ways will last a few more decades. But knowing that God (Reality) communicates more clearly through evidence than ancient texts will change everything. Christianity itself will have a born-again experience by mid-century.

Looking back a hundred years from now, few things will be seen to have had a greater positive impact than the "Evidential Reformation" and the transformation that occurred when Christian leaders worldwide began teaching and preaching how "God's Word" is not limited to the Bible but is revealed in every fact discovered by science. Practically overnight the science versus religion war will end, and the Church will not only regain its moral authority but will become an inspiring force for evolutionary and ecological good in the world.