The Obama administration is establishing new procedures for holding detainees at the Bagram military base. And while they are a step in the right direction, they fail to create a fair and effective detention system that will be credible in the eyes of the Afghan government, the Afghan people, and human rights groups. On the plus side, the procedures will allow U.S.-held detainees to contest their detention, call witnesses, and get advice from "personal representatives." But on the down side, detainees will continue to not have access to lawyers. There are also concerns that the procedures won't be implemented with rigor. In Guantanamo, detainees requested witnesses who the government never sought out. Another key shortcoming is the U.S.'s continued failure to incorporate Afghan laws and institutions. The U.S. recognizes the importance of strengthening Afghanistan's rule of law if it ever hopes to leave. General McChrystal says he wants to drastically improve the Afghan justice and corrections systems so the U.S. can turn Bagram over to the Afghan government "once they have developed the requisite sustainable capacity to run those systems properly." One way to speed up this process is to increase collaboration at Bagram. Over the next few months this should be a U.S. priority. For instance, Acting Afghan Attorney General Fazl Ahmad Faqiryar told Reuters that the government would like to be part of the Bagram review board that determines whether detainees should be released. 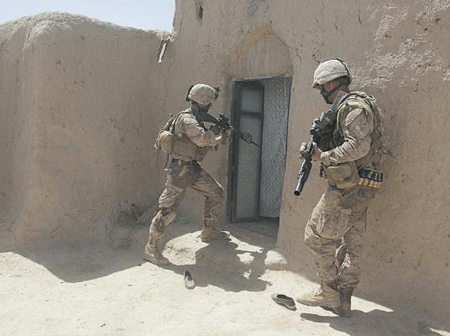 U.S. Marines from Golf Company, 2nd Battalion search homes in the village of Dahaneh on Thursday to clear the town of Taliban insurgents. (JULIE JACOBSON/AP)

Many Afghans remain deeply angered that the U.S. is operating a detention facility on Afghan soil without respecting Afghan law. It's a concern that has been gaining ground among Afghan officials for years and will damage Bagram's credibility if not addressed. In 2008, the U.S. handed the case file of Afghan national Haji Pacha Wazir to Afghan authorities before transferring Wazir to Afghan custody. The authorities noted that there was not adequate evidence for his detention, and President Karzai ordered his release. However, Wazir is still at Bagram and the United States refuses to release him. Afghan officials complained that the incident undermined Afghan sovereignty. The U.S. is understandably wary of handing all its detainees over to Afghan custody. Afghanistan's justice system is plagued by corruption that allows dangerous individuals to bribe their way back to the battlefield while innocent people are detained. But holding detainees at Bagram without Afghan involvement is also a mistake. Alternately, the U.S. could work with Afghan justice, security, and law enforcement officials to make the Bagram process credible in the eyes of Afghan government officials, local communities, lawyers, and human rights groups. Detention guidelines jointly established and followed by the U.S. and Afghan authorities would improve the quality of information gathering, reduce wrongful arrests and corruption, and ensure humane treatment of detainees. Respecting Afghan laws at Bagram that protect the rights of detainees and defense lawyers would provide the process greater legitimacy. This plan fits in well with Special Representative Richard Holbrooke's commitment to a "renewed spirit of cooperation" with the Afghan government. Such cooperation at Bagram would also be part of the effort to get U.S. troops out of the country, which will depend on transferring to Afghans the responsibility for administering their own security and justice sectors.