In what some are calling a bionic hand breakthrough, scientists in Switzerland reported the development of a "smart" artificial hand that lets amputees feel what they're touching or holding.

The experimental prosthesis connects directly to an amputee's nervous system, providing realistic sensory feedback -- giving amputees "dexterity and the sensation of touch," according to a written statement.

"We could be on the cusp of providing new and more effective clinical solutions to amputees in the next years," lead researcher Dr. Silvestro Micera, head of the Translational Neural Engineering Laboratory at the Ecole Polytechnique Federale in Lausanne, said in the statement.

The scientists recently tested the system by implanting electrodes into the median and ulnar nerves of an amputee, who was then able to control a prosthetic hand that was not physically attached to his arm, according to the statement. The amputee was able to wriggle the fingers of the prosthesis, make a fist, and hold objects -- and was able to "feel" needles jabbed into the palm of the prosthesis, news.com.au reported. 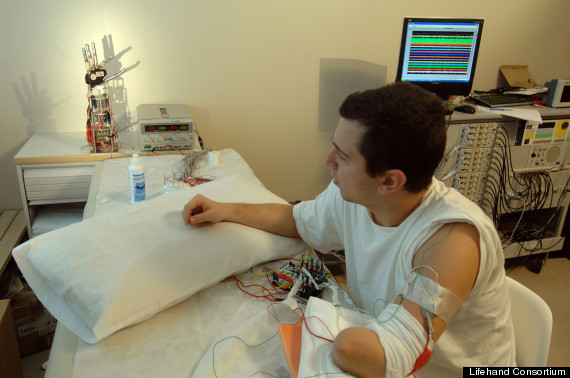 In recent tests, an amputee fitted with electrodes was able to control a hand not attached to his body and "feel" needles jabbed into the prosthesis's palm.

Later this year, the artificial hand will be fitted to an unnamed man living in Rome who lost the lower part of his arm following an accident, Dr. Micera told The Independent. If all goes well, a refined version of the prosthesis will be ready for testing within two years, Dr. Micera said.

Dr. Micera discussed the research at the annual meeting of the American Association for the Advancement of Science, held Feb. 14-18 in Boston.