UPDATE: McCain has responded to the report below. Watch the video here.

Appearing on Fox News this past Sunday, Sen. John McCain attempted to turn his infamously combustible temper from an electoral liability into political strength.

"If I lose my capacity for anger, then I shouldn't be president of the United States," the Senator explained to host Chris Wallace. "When I see the waste and corruption in Washington, I get angry."

But how much of McCain's legendary anger streak does the public actually know? Judging from snippets of Cliff Schecter's new book "The Real McCain" - an advanced copy of which was obtained by the Huffington Post - the answer may be surprisingly little.

Take for instance the verbal-turned-physical attack McCain put on his fellow Arizona Republican, Rick Renzi, which Schecter uncovered through his research:

Perhaps the most remarkable story of McCain's temper involved Arizona Congressman Rick Renzi. Two former reporters covering McCain, one who witnessed the following events and one who confirmed the facts provided by the first, relayed it to me as follows: In 2006, the Arizona Republican congressional delegation had a strategy meeting. McCain repeatedly addressed two new members, congressmen Trent Franks and Rick Renzi, as 'boy.' Finally, Renzi, a former college linebacker, rose from his chair and said to McCain, "You call me that one more time and I'll kick your old ass." McCain lunged at Renzi, punches were thrown, and the two had to be physically separated. After they went to their separate offices, McCain called Renzi and demanded an apology. Renzi refused. Apparently this posture made McCain admire him, as they became fast friends. 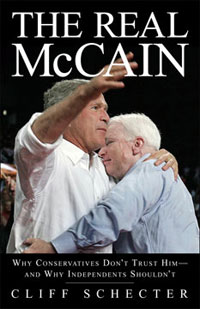 The anecdote comes with the caveat that the sources -- in this instance, two reporters -- have insisted on anonymity and that no one reported on this story at the time when it occurred. Matt Yglesias touched on this issue in a blog post today.

That said, the episode fits into McCain's history of similarly explosive behavior. As Washingtonian magazine documented (and Schecter notes in the book), McCain once "scuffled" with the Senate's then oldest member, Strom Thurmond, during a Senate Armed Service Committee hearing in January 1995. Three years later, the Associated Press article reported that McCain dropped F-Bombs on at least three fellow Republicans.

And in a opinion piece last year on Salon.com, Sidney Blumenthal, now an adviser to Sen. Hillary Clinton, wrote that McCain once told Sen. Ted Kennedy to "shut up" on the Senate Floor, referred to a fellow Republican as a "shit head" and offered a downright vicious and doubly-offensive joke in 1998 Republican fundraiser about then first daughter Chelsea Clinton.

"Do you know why Chelsea Clinton is so ugly?" he asked. "Because Janet Reno is her father."

On Monday, moreover, the website Raw Story obtained a separate anecdote from Schecter's book, in which McCain berated his wife in the full view of aides and reporters during a 1992 campaign stop.

Three reporters from Arizona, on the condition of anonymity, also let me in on another incident involving McCain's intemperateness. In his 1992 Senate bid, McCain was joined on the campaign trail by his wife, Cindy, as well as campaign aide Doug Cole and consultant Wes Gullett. At one point, Cindy playfully twirled McCain's hair and said, "You're getting a little thin up there." McCain's face reddened, and he responded, "At least I don't plaster on the makeup like a trollop, you cunt." McCain's excuse was that it had been a long day. If elected president of the United States, McCain would have many long days.

Read more from The Real McCain -- buy a copy for yourself here.