(RNS) “The California drought is so bad, people in Napa are asking the pope to change the wine into water.”

That joke, courtesy of late-night TV host Conan O’Brien, is the warmup to a new “Joke with the Pope” digital campaign, encouraging people to “donate” a joke to support one of three causes ahead of Pope Francis’ historic U.S. visit.

The campaign, which begins Sept. 8, is being launched by the Pontifical Mission Societies in the United States and precedes the release of its new mobile app, Missio. The mission societies work to spread the Catholic faith overseas, especially in poor and remote areas.

Already, the campaign has attracted actor and comedian Bill Murray, who’s been named honorary adviser for pontifical comedy by the society.

“Everyone’s very excited fundamentally about the message and meaning of the Holy Father and the fact that he’s coming to the United States, and we want to prepare well and do something meaningful to take advantage of this moment to reach out and make significant change in the world,” said the Rev. Andrew Small, national director of the Pontifical Mission Societies in the United States.

Through Oct. 2, people — anyone, not just Catholics — can submit a written joke or short video of themselves telling a joke on the Joke with the Pope website, jokewiththepope.org. They then can choose a cause their joke will support: helping children in need in Argentina, housing the homeless in Ethiopia or feeding the hungry in Kenya.

The organization will announce the funniest joke the following Monday (Oct. 5), bestowing the title of “honorary comedic adviser to the pope” on the winner and donating $10,000 to the cause chosen by the winner.

Murray likely will have a hand in choosing the winner, according to Small.

“I think he will be something of the go-to man on what is and is not funny,” Small said. “We can only hope the Holy Father makes his own contribution.”

The Pontifical Mission Societies said in a written statement that it hopes Joke with the Pope will help spread the joyful spirit of Francis as he visits New York City, Washington, D.C., and Philadelphia Sept. 22-27.

This is, after all, the pontiff who wrote an apostolic exhortation titled “Evangelii Gaudium,” or “The Joy of the Gospel.”

“In that joy, we’re able to then lift our own hearts up and reach out to one another,” Small said. “Even if that’s all we can share with one another — a smile, a laugh or, you know, like the pope, sort of the touch of compassion — I think that helps us to change the world one laugh at a time.”

The organization also hopes the campaign will raise awareness for the new Missio app, available beginning Sept. 10 in both the App Store and Google Play.

An initial version of the app, mostly a news aggregator sharing how the church is engaged around the world, was launched in 2013.

The new app will connect users with hundreds of projects, creating what Small calls “a compassionate commons.”

All the projects will be part of the societies’ work in Africa, Asia and Latin America, but Small said he envisions networks of other religious organizations, including non-Catholic ones, becoming involved.

Users will be able to support those projects by offering not just money, but also friendship. They can let leaders know they are praying for them, light a “digital” candle or write to their elected officials about a cause. They can share a project on social media or organize an event. They also can connect with others who share their interest in causes or their location.

A “Tinder for do-gooders” is how Small described the app.

People want to be what Small called “change-makers” and join Francis, the “change-maker-in-chief.” They also want to connect directly without receiving information filtered through the media or public relations, he said.

“It’s a new way of connecting. It’s not just a new piece of technology,” he said.

New Campaign Is Crowdsourcing All Your Best Pope Jokes
50 Years Of Pope Visits To The U.S. 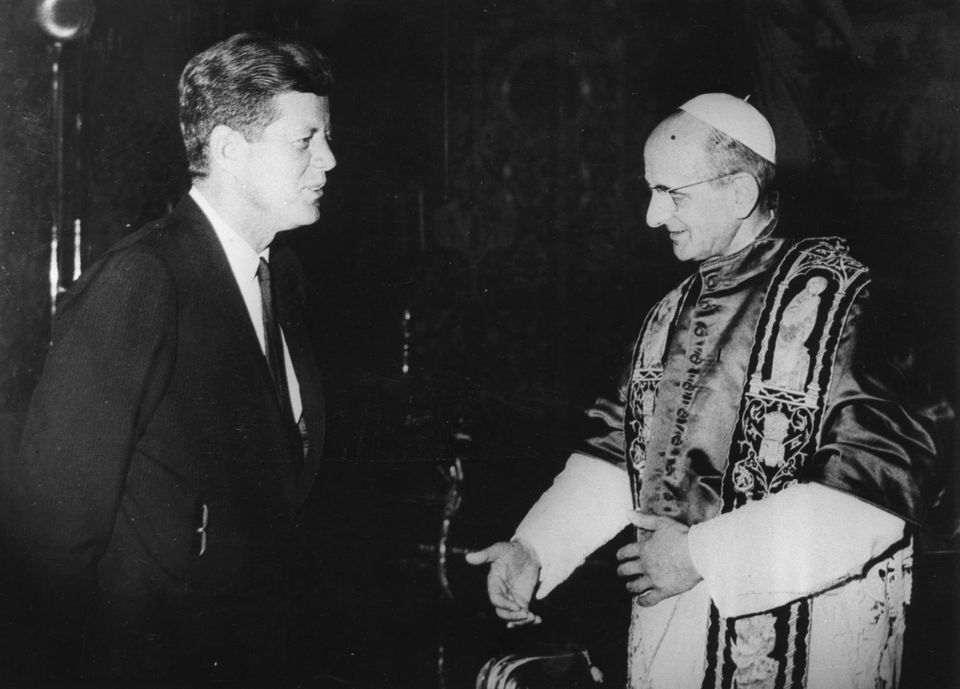