Two women, including the shooter's estranged wife, were fatally wounded in the incident. Two police officers were also transported to a nearby hospital with non-life threatening injuries. Authorities say the shooter -- identified as Thomas Matusiewicz -- is dead, NBC Philadelphia reports.

Matusiewicz opened fire around 8:00 a.m. inside the public lobby of the courthouse, a state police spokesperson said. He did not pass through the security perimeter located a few feet inside the front doors.

Authorities said that there are eight to 10 officers on the courthouse campus at any given time. Multiple schools in Wilmington, Del., have been placed on lockdown.

The shooter was initially identified by "police and law sources" as David Matusiewicz, who was at the New Castle County Courthouse in Wilmington on Monday morning for a child support hearing involving his three kids. Those sources now identify the shooter as David's father, according to USA Today. Police have not yet confirmed the shooter's identity.

The two officers were struck in their bullet-proof vests, according to Sgt. Paul Shavack of the Delaware State Police.

WILMINGTON, Del. — Three people died Monday morning in a shooting at a courthouse in Delaware, including the shooter, authorities said.

Delaware State Police Sgt. Paul Shavack confirmed three people died in the shooting at the New Castle County Courthouse in Wilmington. He said the suspected gunman and two women are dead. The city's mayor said one of the women killed was the shooter's estranged wife, but Shavack said police had not confirmed that was the case.

Shavak said in a noon briefing that the motive was still to be determined but that it was not a random shooting. He cautioned against information coming from any other source.

Wilmington Mayor Dennis Williams said in a telephone interview that he was told the man shot and killed his wife.

Jose Beltran, 53, a court employee who works in the building, was entering the lobby Monday morning when he heard two shots. He said he turned around and ran.

"It happened so fast," he said, adding he heard three or more shots as he ran.

Dick Lawyer works part time across the street at the law office of Casarino, Christman, Shalk, Ransom & Doss and said his office building had been on lockdown since about 8:15 a.m. The shooting occurred about five minutes earlier. He said he and colleagues were shaken at first but calmer hours later. "We have a couple of people whose relatives work at the courthouse," said Lawyer, who works as a document management specialist for the firm.

Robert Vess, 68, dropped off his wife, Dorothy, 69, for jury duty at the courthouse Monday morning. He said it wasn't until after 10:30 a.m. that she was able to call him and let him know she was safe. Vess said his wife, who works as a baker at a grocery store, was crying when she called, but he thought she would be all right.

This is a breaking story. Check back for more updates. 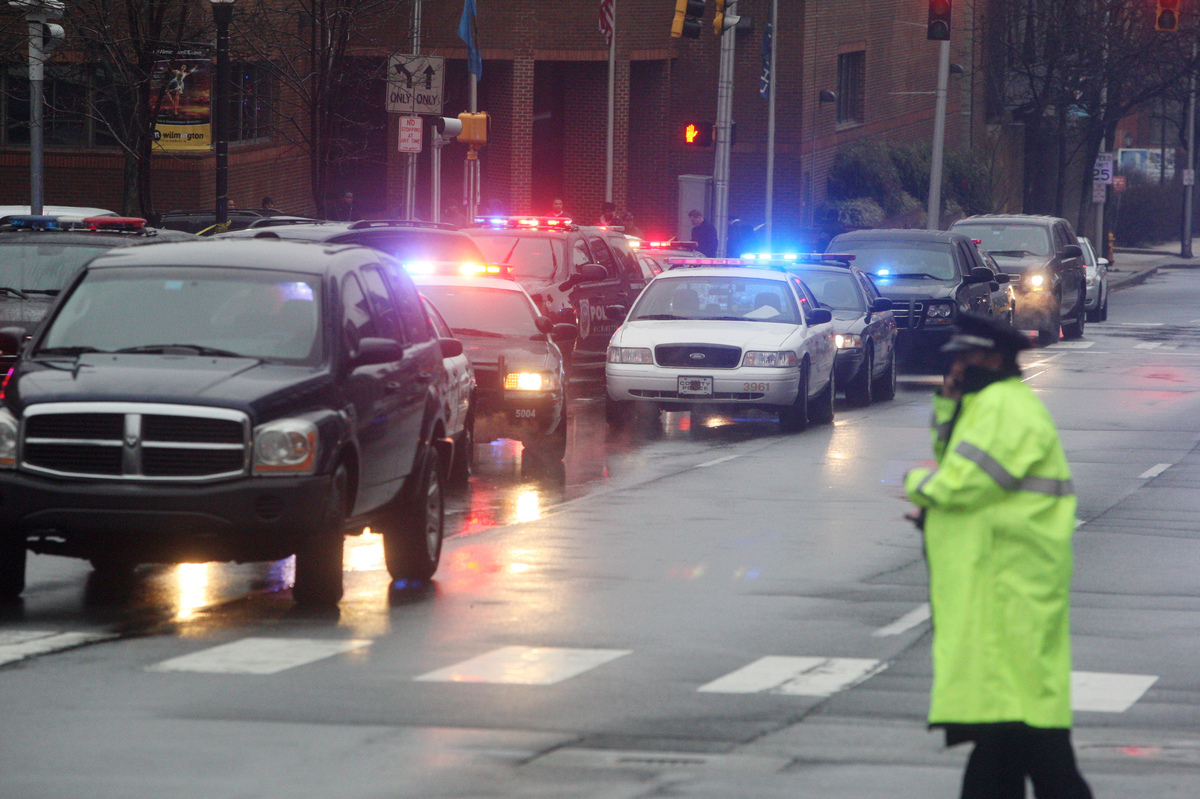 1 / 8
New Castle County Courthouse Shooting
Police cars fill the street outside the New Castle County Courthouse, Monday morning, Feb. 11, 2013 in WiIlmington, Del. , after a man killed his estranged wife and two others at the courthouse. The mayor of Wilmington says police have killed the gunman. (AP Photo/The News Journal/William Bretzger) PHILADELPHIA TV OUT AND PHILADELPHIA ONLINE SITES OUT
AP