Since 1961, on every morning except Sunday, CIA briefers have presented the president of the United States with a top-secret, five-to-ten-page report on world events pertinent to national security. White House press secretary Ari Fleischer called the report, now known as the President's Daily Brief, "the most highly sensitized classified document in the government." Former CIA Director George Tenet believed the PDBs to be so sensitive that none could be released for publication "no matter how old or historically significant it may be." Yet, yesterday, the CIA declassified and released every PDB produced during the Kennedy and Johnson administrations, some 2,500 in all.

Among other reasons, according to a CIA Information Management Services statement: "To promote an understanding of the intelligence information that has helped shaped major US foreign policy decisions."

"So they say," scoffed a self-described JFK conspiracy theorist seated behind me at yesterday's declassification event, held at the Lyndon B. Johnson presidential library in Austin, Texas. He was one of several hundred University of Texas students and other members of the public who'd been cleared to attend the declassification, an event that included speeches by CIA director John Brennan and Director of National Intelligence James Clapper.

So what's in the PDBs? Details of how and in which Hollywood studio the Apollo moon landings were staged? How the Department of Defense made use of alien technology picked up at Area 51?

Not a word on either.

Or, at least, not a word that was released. Prior to releasing the documents, the CIA redacted 20-25 percent of the text, sometimes entire pages, in order to protect sources and intelligence-gathering methods still in use.

"Yeah, right," said the conspiracy theorist, whose name has been withheld per his fear of government reprisal. Back to him in a minute.

First, what did the CIA know about the Kennedy assassination?

Let's look at the brief from November 23, 1963, the day after Kennedy was killed in Dallas. Known then as the President's Intelligence Checklist, it offered freshly-sworn-in Lyndon Johnson a tiny fraction of the usual quantity of intelligence. Here it is, in its entirety:

For this day, the Checklist Staff can find no words more fitting than a verse quoted by the President the day he learned of the presence of Soviet missiles in Cuba.

Bullfight critics ranked in rows
Crowd the enormous plaza full;
But only one is there who knows
And he's the man who fights the bull.

A singular insight into John Kennedy's mindset? And/or that of the CIA officers?

"Only the bull part," said the conspiracy theorist.

Press stories to the effect that Lee Harvey Oswald recently visited Mexico City are true, according to our information. Oswald visited both the Cuban and Soviet embassies on 28 September. He was trying, we are told, to arrange for visas so that he could travel to the USSR via Havana. He returned to the US on 3 October.

The conspiracy theorist dismissed that as propaganda, "a diversionary tactic." He wasn't alone. During question and answer sessions, several audience members stomped up to the microphone and demanded the real truth from the spies. The panelists on stage -- including former CIA director Porter Goss, former National Security Agency director Admiral Bobby Inman, and director of CIA Information Management Services Joseph Lambert -- responded with little more than suggestions that those audience members retake their seats. Now.

The conspiracy theorist applauded their pluck. "Whole books have been written laying out the case that Lyndon Johnson had JFK killed," he said, ticking off titles.

If those works were accurate, wouldn't the LBJ Library, the institution dedicated to Johnson's legacy, be the last venue on the planet the CIA would choose for the declassification?

"That's exactly what CIA wants you to think."

Either way, the CIA has provided a singular opportunity to see international events from a presidential perspective, the Cuban Missile Crisis and the Vietnam war in particular. You can read them as PDFs on the CIA's website. Director Brennan also promised the declassification of the Nixon and Ford briefs in the near future, upon which time, perhaps, we'll gain some insight into what really happened to Elvis. 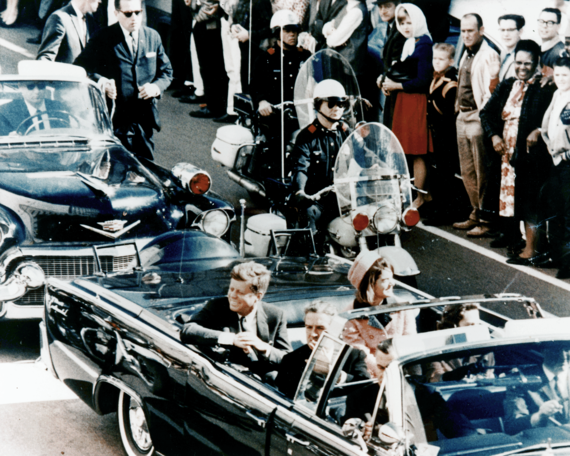