The UN is as much stage as platform for diplomatic exchange, and the Kremlin is no longer so keen on keeping the curtain up. From news to manifestations in popular culture, diplomacy is evolving, modern communication defining both obsolescence and new demands/opportunities. The conversation is increasingly moving beyond states to the global citizen and access to news and perspectives is part of the diplomatic arsenal. Most recently, the UN Security Council Resolution demanding access for investigators to the MH17 Malaysia crash site in pro-Russia rebel held territory showed how Moscow is susceptible to scrutiny, demands and pressure from global citizens, perhaps even more so than from foreign capitals. This though could also further efforts by some to reverse the trend since the end of the "original" Cold War and have the UN revert to largely a diplomatically stale, shades drawn club of states, some more equal than others.

Diplomatic Poker around & beyond "Horseshoe Table"

As the "formal" debate on Syria roiled around the horseshoe table of the UN Security Council during the early stages of the crisis, the more telling interaction played out on two related platforms between Moscow's Foreign Minister Sergey Lavrov and then US Secretary of State Hillary Clinton. The veto powers generally speak first during UN Security Council (UNSC) debates, and then promptly leave junior diplomats to occupy the seats as smaller states take their turn to speak and compete for attention. Beyond media range, Lavrov, Clinton, several larger EU members and entourage held brief meetings on the edges of the UNSC private diplomats' lounge. It played out like multidimensional chess or more accurately, poker.

The cards were played out before the media at the UNSC stakeout. Sitting behind the scenes within the UNSC Lounge, I watched Lavrov arch his neck to catch Hillary's comments to the assembled global media. His eyes darted searching his own mind for the retort. It was a poker-face but with a rather obvious "tell" as he debated between bluff or call- folding generally was never a big part of my old colleague Lavrov's game. Perhaps I'm wrong, but it appeared that policy was being assembled on the basis of tactics as much as any perceived shared and conflicting interests of the globe's presumed dominant military and diplomatic powers. By comparison, China generally sought to be consulted but avoided making a definitive decision, unless its direct interests are at stake. See- Who Will Get Sold Out at Syria Peace Talks?

Reversing more than two decades of a UN interacting and making its brand more visible and presumably relevant to the global citizen, the UN was compelled to reject "House of Cards" (an ongoing NetFlix miniseries revolving around politics) filming in the UNSC plenary chamber. It was blocked by Russia's UN Representatives. According to Foreign Policy magazine, the stated rationale given was that the UNSC Plenary Chamber must be kept at all times open in the event of an unforeseen emergency. However, the UNSC actually conducts most of its meetings via informal conferences among some or all UNSC members that frequently could be off-sight. Even when the UNSC gathers as a whole, most of the discussion and presentation of relevant evidence/information occurs in the stringent privacy of the UNSC Consultation Chamber, a small side conference room that also excludes all other states except those then serving on the UNSC. None of such proceedings are broadcast, even for internal consumption.

The conflict in Bosnia & Herzegovina (BiH) particularly exposed the lack of transparency in the work of the UNSC - a rebellion of sorts grew. Member states had to rely upon informal briefings by those inside the closed door, and their goodwill and objectivity. If the briefing/evidence presented behind closed doors was inaccurate, the opportunity to remedy inaccuracies was at best limited and relied upon an Ambassador's/Diplomat's capacity to get the attention of those within the closed chamber as well as deliver the counter evidence/information. We were fortunate to have established good working relationships with several Ambassadors, from the US's Madeleine Albright to Venezuela's Diego Arria, who could present relevant evidence as well as our perspective within the sanitized internal chamber.   Our protests against the lack of transparency overtime helped evolve a more systematic reporting from within, including a designated briefing, although still incomplete. A more thoughtful review is now provided by the  semi-official Security Council Report, (privately funded and staffed) securitycouncilreport.org - a necessity for both diplomats and those who more closely follow the work of the UN.

What the globe sees most of the UN though is the more formal debates around the UNSC's horseshoe table and the sparring before the UN media corps. This is perhaps theatrics in part, but it is frequently where smaller states can climb into the ring with the big powers. Bloodying the nose of the veto wielding states does not necessarily compensate for the overwhelming imbalance of power, military or economic, but it can alter the course of debate and narrative. Although not a diplomat by professional training, nonetheless as an attorney and as an American-Bosnian who became comfortable with the stage, confronting the global powers during the UNSC open debates became part of our leverage as BiH's UN diplomatic representatives. Then-Russian UN Ambassador Lavrov became a more frequent antagonist as well as Jean-Bernard Merimee, then-French Ambassador under the unprincipled Franois Mitterand. My favorite target, I liked to reverse the diplomatic scope, was UK Ambassador Sir David Hannay, under PM John Major and Douglas Hurd, who appeared to take sadistic pleasure in telling the Bosnians & Herzegovinians that there "would be no cavalry coming to save them."

Perhaps I did not know that I was destined for a Don Quixote exercise in futility, but countering empty expressions of sympathy and long-winded lip service to principle as it withered in BiH was a part of the diplomatic scuffle that exposed hypocrisy and worse. BiH had been designated for sacrifice, and some preferred to project it as a mercy killing in lieu of Milosevic's and Mladic's genocidal brutality. As BiH, though frustrated expectations and clung to life with the courage of ordinary citizens and defenders ever more reflected, some sought to refashion the narrative of victim and victimizer. In part that may have appeared a simple task by projecting the Bosnians as the "Muslim Government," despite the fact that BiH was defended at home and represented at the UN by a multi-ethnic, multi-religious team spanning BiH and beyond - we had Jewish, Irish, Arab, African-American, etc. members on our extended diplomatic team, a picture that garnered further attention to what the defense of BiH was about. When Sir David Hannay opted once to refer to me as the "Ambassador from Brooklyn" not Bosnia, I was only too pleased to accommodate when the media rushed to get my retort to the intended affront: "I'm not the Ambassador from Brooklyn but actually the Ambassador from Staten Island," seeking to further impress the link between America's melting pot society and BiH's long tradition of ethnic, cultural and religious pluralism.

Do not Touch or Feed the Diplomats   When the UN initially opened on the East River in NYC now seven decades earlier, it was almost like some exclusive reserve in the middle of the real world jungle. Celebrity did come to visit but in black-tie and closed events. One would almost expect the ordinary citizens that entered through the visitors' gate to be greeted with a sign: "Do not Touch or Feed the Diplomats!" Alfred Hitchcock was rejected by the UN for filming and had to build an entire replica of the inner "Diplomatic Lounge" for his scene in "North by Northwest" where apparently Cary Grant stabs an Ambassador in the back.

Overtime, the UN held the door just a bit ajar as Audrey Hepburn and Peter Ustinov assumed roles as Goodwill Ambassadors and fundraisers for UNICEF and its worthy children's programs. Even Rod Stewart took the stage in a redesigned UN General Assembly Hall around 1980 to sing "Do You Think I'm Sexy?" - leopard tight pants and blonde locks, for a benefit concert. 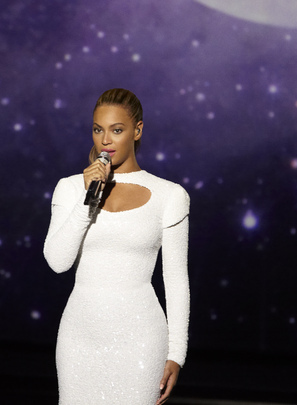 As an American, when I assumed the role of BiH Ambassador to the UN, I observed a UN lacking in popular culture, subject to stereotyping of a staid institution for diplomats and governments, and certainly disconnected from the global citizen. Along with some other voices, we encouraged the UN bureaucracy and subsequent new UN Secretary General Kofi Annan to weave culture into the UN's work and vice-versa. Over the last few years, concerts have been staged on behalf of women by Beyonce. Charlize Theron has reached out on behalf of victims of sexual abuse and rape. Stevie Wonder has made the UN more welcoming for the disabled. Angelina Jolie has become one of the most active Goodwill Ambassadors on behalf of refugees, displaced persons and those ethically cleansed-persecuted. 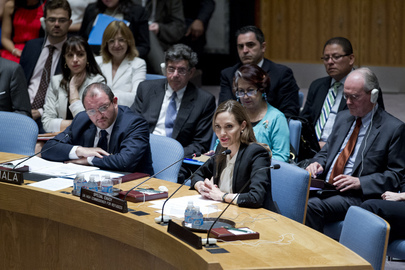 Films have been premiered in the UN General Assembly reflecting the life of Palestinians under occupation and the same hall gathered a music call to arms against FGM headlined by Angelique Kidjo. The UN's Environmental and Biodiversity programs benefit from the work of Ed Norton and Gisele Bundchen. "Hunger Games" films have teamed with the UN's efforts to feed the hungry via promotions and web gaming. Sports plays a role: Zinedine Zidane and Ronaldo have hosted benefit soccer matches, but also Liechtenstein's UN Ambassador and UN Secretary General Ban Ki-moon have involved their diplomatic colleagues in similar events on the field. My old friend Bono moved with the UN to NYC's Central Park for a concert promoting the rising identity of "global citizen." 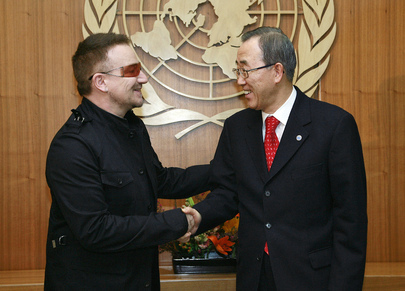 From Latin America to Asia, the UN, its various organs and causes, reach out to the global citizen via a small army of artists and Goodwill Ambassadors. Some may think that this is overkill and obscures the UN's diplomatic mission, but then traditional diplomacy has not exactly garnered great results or good reviews. Perhaps it is more imperative that the developing mission of the rise of global citizen and inclusiveness take the center stage of projecting the evolving UN. The UN recently hosted the finals of "Project Runway," but the message was that diversity as well as inclusion is the new fashion as much as any dress.

Popular culture and transparency at the UN are linked. While some still cling to the UN as a club of states, or more accurately their governments, democratic and dictatorial, the institution is transitioning to one that increasingly represents and appeals to the highest aspirations of global citizens. Otherwise, it may become irrelevant or just slip into the destiny of the League of Nations. See- Can Muslim UN Human Rights Chief Save Humanity from Itself? Undoubtedly, there are some governments and institutions who are uncomfortable about being bypassed. This may be part of the reaction in government offices in Moscow and Beijing. Some nationalists may fear the rise of a "global government," but the message I would relay to Tea Party and other Americans, the vision of the US Declaration of Independence and Constitution is also projected by a UN for the people. No one is less patriotic or American (or British or French or Chinese or Russian or Nigerian or Pakistani or Brazilian or Bosnian, etc.) if also embracing the rising identity of global citizen. Efforts to thwart popular culture and undermining transparency at the UN are a regressive vision more in line with the Cold War and a closed autocratic diplomacy.

A vision beyond current delineations - this song by a most thoughtful as well as talented young artist, Ben Fuller reflects the new mood - Love Song for the People