The recent diplomatic and journalistic storm over plans to expand the Gilo neighborhood in Jerusalem exposed a fundamental difference of view between Israel and many of its strongest supporters. Reacting to news that plans for 900 new dwellings in Gilo were to be approved by the Jerusalem Planning Committee, the White House was said to be "dismayed" by the move, and the UN General Secretary Ban-Ki Moon "deplored" it. The two statements, and others coming from Europe, insist that the status of Jerusalem should be resolved through negotiations between the parties, and that neither should take actions to pre-empt the outcome of such negotiations.

In Israel, meanwhile, politicians and the public, led by Prime Minister Netanyahu, responded angrily to such international protests, describing them as unwarranted intervention in Israel's affairs. Why should foreign powers tell Israel what and how to build in one of the large neighborhoods of its capital? asked residents of Gilo, while the Office of the Prime Minister explained that "construction plans in Jerusalem are municipal issues, just as they are in Tel-Aviv and Haifa."

Reactions in Israel reflect a widely shared assumption, which developed over the four decades since Israel annexed East Jerusalem and declared it part of "United Jerusalem." The large Jewish neighborhoods Israel built on expropriated lands in the annexed areas are home to about 200,000 Israeli Jews, who represent every social and political group in the country. They are accepted as a natural and permanent part of metropolitan Jerusalem and of Israel. Very few refer to them as "settlements," and even steadfast supporters of a future Palestinian state do not expect these neighborhoods to be included in its new borders. It is to this consensus that Netanyahu appeals in his rejection of the international protests over construction in Gilo.

The Israeli consensus ignores two critical issues, which can explain why the rest of the world responded to the Gilo plans with such alarm and warnings. First, there is the fact that international law does not distinguish between the areas annexed by Israel in 1967 and the rest of the West Bank and Gaza. They are all considered occupied territory and, as such, their disposition cannot be decided by the occupying force unilaterally. It must be resolved through diplomatic negotiations and international agreements. Even countries known for their support of Israel do not accept the legality of Israel's unilateral annexation of East Jerusalem. None has set its embassy in the capital.

The quick reaction by foreign governments and international organizations points to the second critical problem in the Gilo plans. These are not simply plans for routine construction in an existing urban space. Instead, they are part of a series of construction projects that are intended to form a wide swath of Jewish neighborhoods on the South Eastern parameter of metropolitan Jerusalem. Thus, the 900-unit residential expansion in "Mordot Gilo," discussed by the Jerusalem Planning Committee on November 17, is just the first stage of a larger expansion of Gilo to the east and south that will total about 3000 units. Other plans include the new neighborhood of Giv'at Ya'el to the west of Gilo (14,000 units), which will swallow the Palestinian village of Walajeh; the new neighborhood of Giv'at Hamatos east of Gilo (about 3,700 residential units, as well as 1,100 hotel rooms, public buildings etc.); and an expansion of the Har Khoma neighborhood to the west (about 1,400 units). 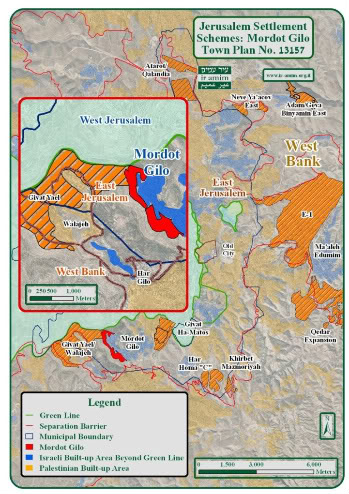 If realized, these plans would connect Israeli Jerusalem to the Gush Etzion settlements. At the same time, the swath of Israeli neighborhoods on the South East would join the neighborhoods that close on Jerusalem from the North and North East, thus cutting a major territorial bridge between the future Palestinian state and East Jerusalem. Like the Palestinians, the US, UN and the Europeans all understand the real nature of the construction in Gilo and the neighboring areas. They know it violates the outlines for a future Palestinian state as drawn at Camp David, Taba, and the recent negotiations between Prime Minister Olmert and Palestinian President Abas. They know it would undermine any future peace agreement. This is why they object and protest.