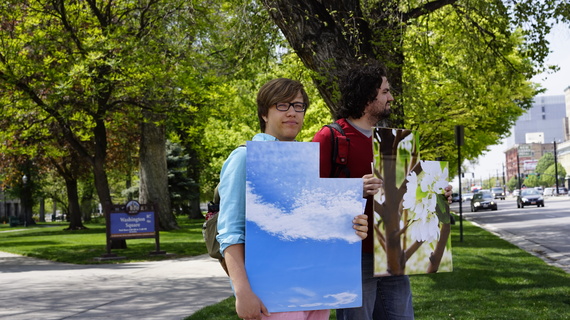 Panhandling took a different form in downtown Salt Lake City this past Earth Day when students from the University of Utah's Art, Action and the Environment class took to the streets. They had recycled cardboard signs in hand as they made their way to strategic, high-traffic locations both on campus and in the community to make their plea.

But they weren't begging for spare change. Instead, their signs showed one of three Utah-shaped original photographs displaying Utah's skies, water and natural flora. What these students were begging for is cleaner air and water and suggesting nature be a prescription for healing.

The project was entitled, "Rethink, Reconnect, Rejuvenate" and was the collaborative effort of five undergraduate honors students from various disciplines across campus including mechanical engineering, art, business and parks and recreation.

In addition to the cardboard photographs, they had smaller replicas printed as postcards that provided passersby with the image on one side and a link to the group's website, where visitors can find additional information on the project, links to sites with more in-depth information, maps of the city's parks, the watershed in the Wasatch range, and even links to local nonprofit organizations working to better the environment.

"With this project, the students have entered the difficult-to-define practice of socially engaged art," said Department of Art & Art History Assistant Professor Wendy Wischer who created the course and led this semester-long project with the help of teaching assistant Justin Watson. "Their goal was to create a meaningful art experience that promoted social change with locally-specific environmental issues and active engagement with the local community. The intention is to use the limitless nature of art to promote creative learning and new ways of discovering solutions."

And, after hundreds of hours of research, planning, coordination and anticipation, the students left the classroom and went out into the world. As beggars for change.

"When I signed up for the course because it fulfilled a fine arts requirement," said Sloan Russell, who studies business marketing and Portuguese. "I never imagined it would have such a powerful impact on me."

Russell had two realizations during the process. The first was that art making is a far more complex, challenging and thoughtful endeavor than he (sheepishly) thought it was. The second was that he has a deep passion for environmental protection. So much so, that he's reevaluated and rethought some of his future business ideas to have a significantly reduced impact on the planet.

But he wasn't the only student so moved by this experience. Jacob Hopkins, a mechanical engineering student in the course described a sort of revitalization of the creative part of his brain.

"At first, I'd leave class with the right side of my brain hurting," Hopkins joked. "For me, most of my days are spent thinking mathematically and logically -- someone has written a recipe, and I'm going follow it. But this class has re-exposed me to a way of thinking that will be helpful not only in my schooling, but in my future career."

He's right. Some engineers may always follow the "recipes," but some must also be able to create them.

It is hard to anticipate what an experience like this would be like until a person has done it, and there were some parts of it that were both frustrating and sad. The students were surprised by how often they were simply ignored -- sometimes because people seemed more connected to whatever was streaming into their ear buds than anything else, and others who would go to great lengths to avoid eye contact.

"I was sitting at a busy Trax station, and it was interesting to see how many people walking off the train would purposefully look away," said Sabrina Stein who is studying parks, recreation and tourism. "But those who were on the train and safely behind the glass would stare, even as the train pulled away."

That degradation wasn't something for which they had planned. Although, neither was some people's genuine care and concern. When Hopkins was stationed on campus, he began to attract a growing number of students who ended up engaging in nearly 30-minute conversation about the ways they could change the world.

For Janey Heyman, who's dedicated her education to environmental and sustainability studies, this was a very affirming exercise. Connecting with students on campus and people in the community was all in a day's work for her.

"This reinforced the reason for my major," she said. "But it changed how I think about art. I hate to say that I must have believed the stereotypes about artists, but, believe me, I now have a deep respect for them."

The transformation for photography student Kelly O'Neill was more nuanced. He described how he felt in nature when he'd go camping with his family in southern Utah when he was young. That, he said, was enjoyment, and he contrasted that having a respect for nature.

"It's something not just to be exploited for our enjoyment," he said. "We have to appreciate and preserve it -- something I'm now obsessed with doing!"

Perhaps not all of the students will leave the class with a new obsession, but all will leave changed, whether as more conscientious inhabitants of this world, deeper appreciators of the arts, more creative professionals, or masters of the sometimes dreaded group project.

"They respected each other, they liked each other, they pulled their own weight, and they valued each other's opinions," Assistant Professor Wischer said, reflecting on the process in its entirety. "It was perhaps one of the most successful student collaborations I've ever witnessed."